Norfolk State University (NSU) is a public four-year, coed, liberal arts university and one of the largest historically Black colleges in the country. Established in 1935 as the Norfolk Unit of Virginia Union University, NSU became an independent college in 1969. NSU is a member-school of the Thurgood Marshall College Fund and the Virginia High-Tech Partnership. It is also the home of the Harrison B. Wilson African Art Gallery, located in the school's library. 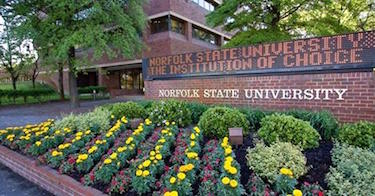 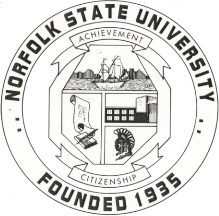 Norfolk State University was founded September 18, 1935 in the midst of the Great Depression as the Norfolk Unity of Virginia Union University. Its first class included 85 students. In 1942, the College became the independent Norfolk Polytechnic College and, in 1944, the Virginia Legislature issued an Act that made it part of Virginia State College (now Virginia State University). By 1950, enrollment had grown to over 1,000 students. Its first permanent building, Brown Hall, opened in 1955. The campus is located on the former site of the 50-acre Memorial Park Golf Course, which the city of Norfolk sold to the school for $1. Today, the campus encompasses 135 acres and 31 buildings. In 1969, the school separated from Virginia State College, becoming fully independent; it attained university status 10 years later.

The NSU athletic teams are nicknamed the "Spartans," an identity adopted in 1952. The Spartans participate in NCAA Division I, the highest level of intercollegiate althletics sanction by the NCAA in the US, in the Mid-Eastern Athletic Conference (MEAC). Green and gold are the official school colors.

NSU offers undergraduate and graduate programs in eight different schools/colleges. These include the School of Business, School of Education, College of Liberal Arts, College of Engineering, Science & Technology, School of Social Work, School of Extended Learning, Honors College, and the Graduate School. Norfolk State is accredited by the Commission on Colleges of the Southern Association of Colleges and Schools amd offers 2 doctoral and 15 master's degrees. Additionally, NSU offers 36 undergraduate degrees, including the only bachelor's in Optical Engineering in the State of Virginia.

NSU's motto is "Achieving With Excellence." The University's mission is as follows:

The University is also home to the Harrison B. Wilson African Art Gallery, which is located on the 2nd floor of the Lyman Beecher Brooks Library. This unique collection supplements the multicultural learning experience of students with museum-quality African art pieces. The Gallery is open Monday to Friday from 9:00 AM to 5:00 PM.