Constructed in 1852, the Tyler County Courthouse of Middlebourne, West Virginia is listed on the National Register of Historic Places. The Neoclassical Revival style courthouse replaced a previous courthouse that had been constructed in 1820. The courthouse was renovated in 1922 and remains the center of county government for the residents of Tyler County. Today the jail no longer houses inmates and is home to the county emergency call center. The clock tower is in working condition after being restored several years ago.

The courthouse and jail were listed on the National Register of Historic Places on June 23, 1980. (Photograph by author) 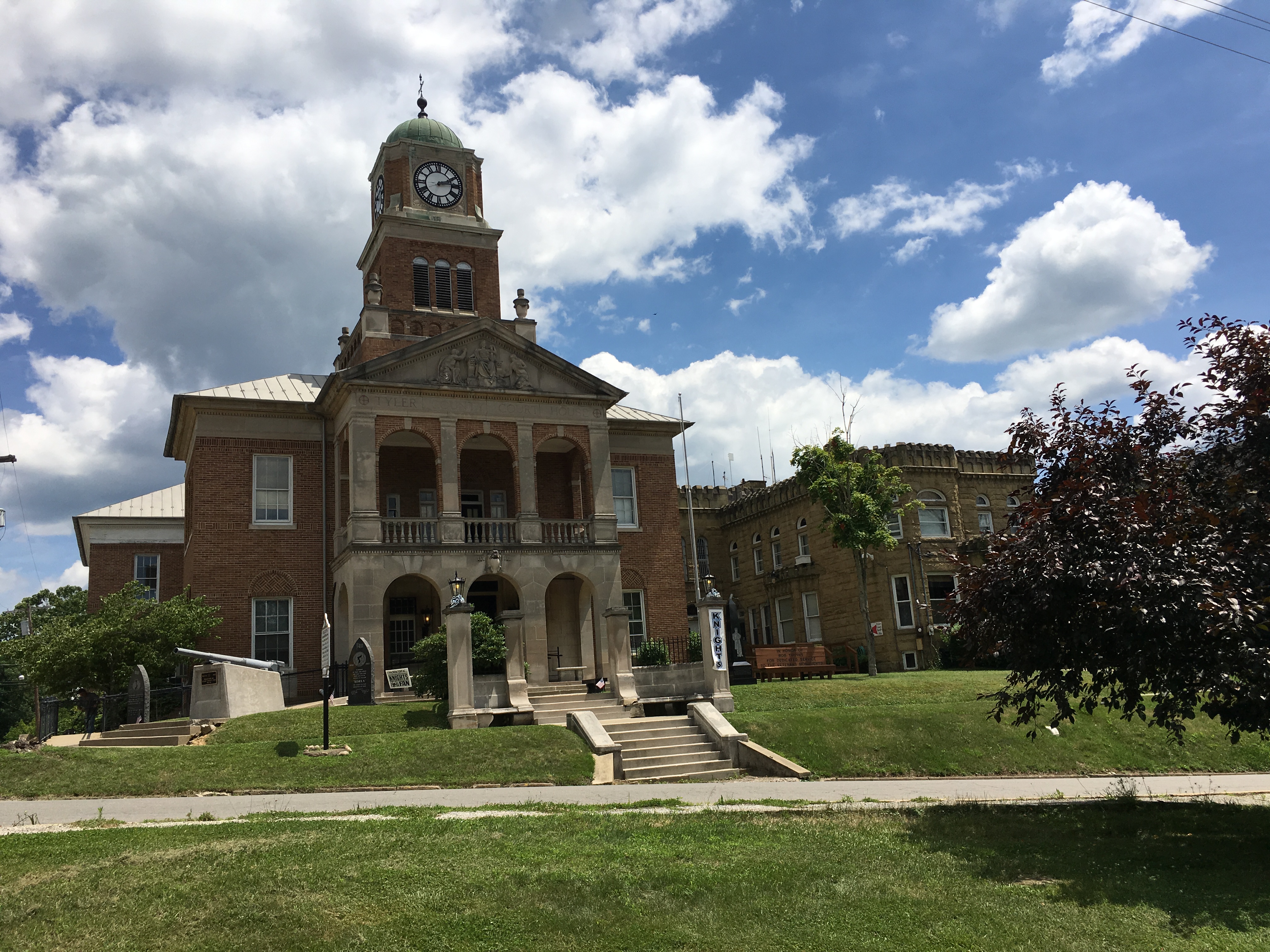 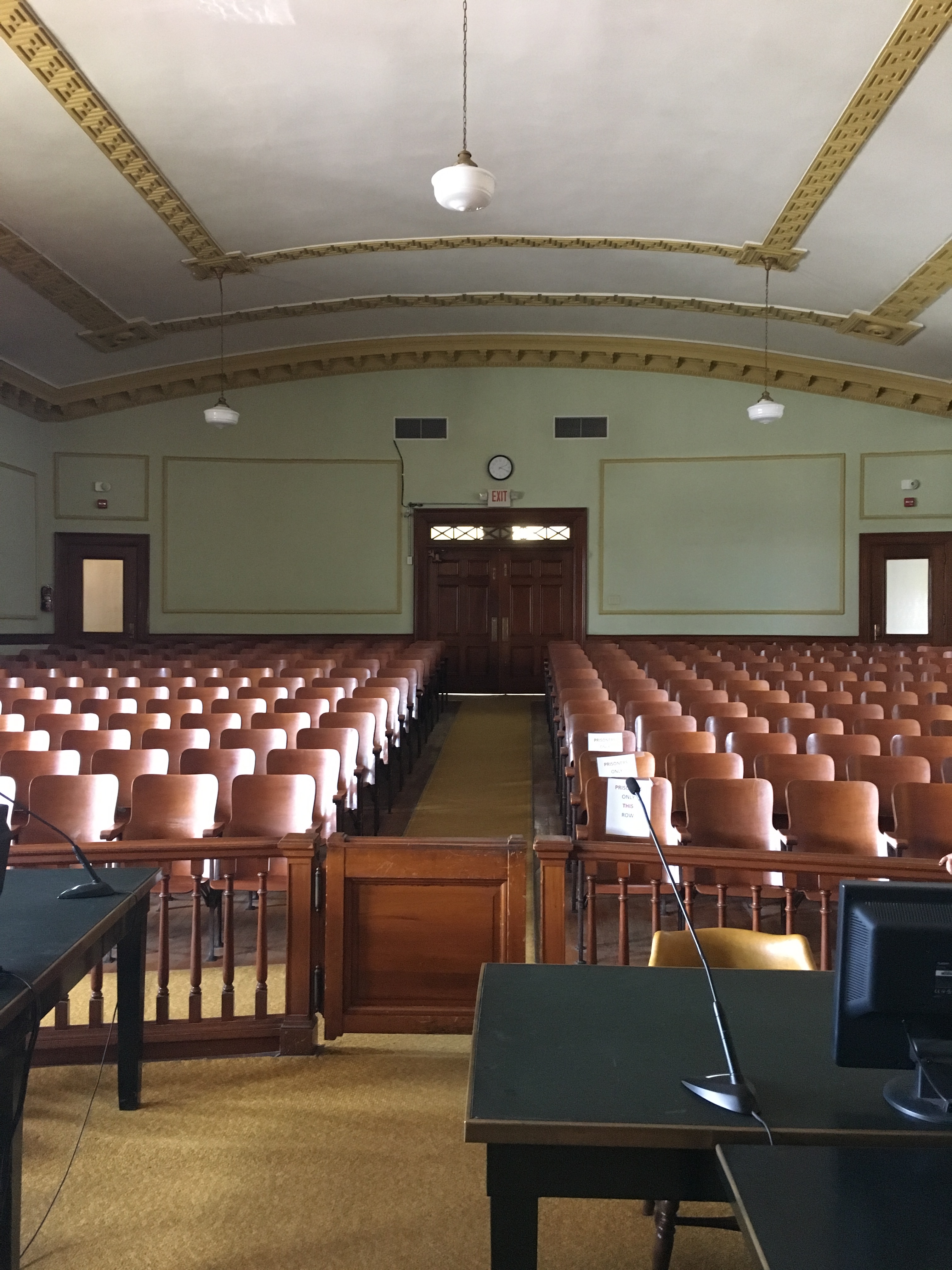 A plaque that pays tribute to the original courthouse (1852-1922). (Photograph by author) 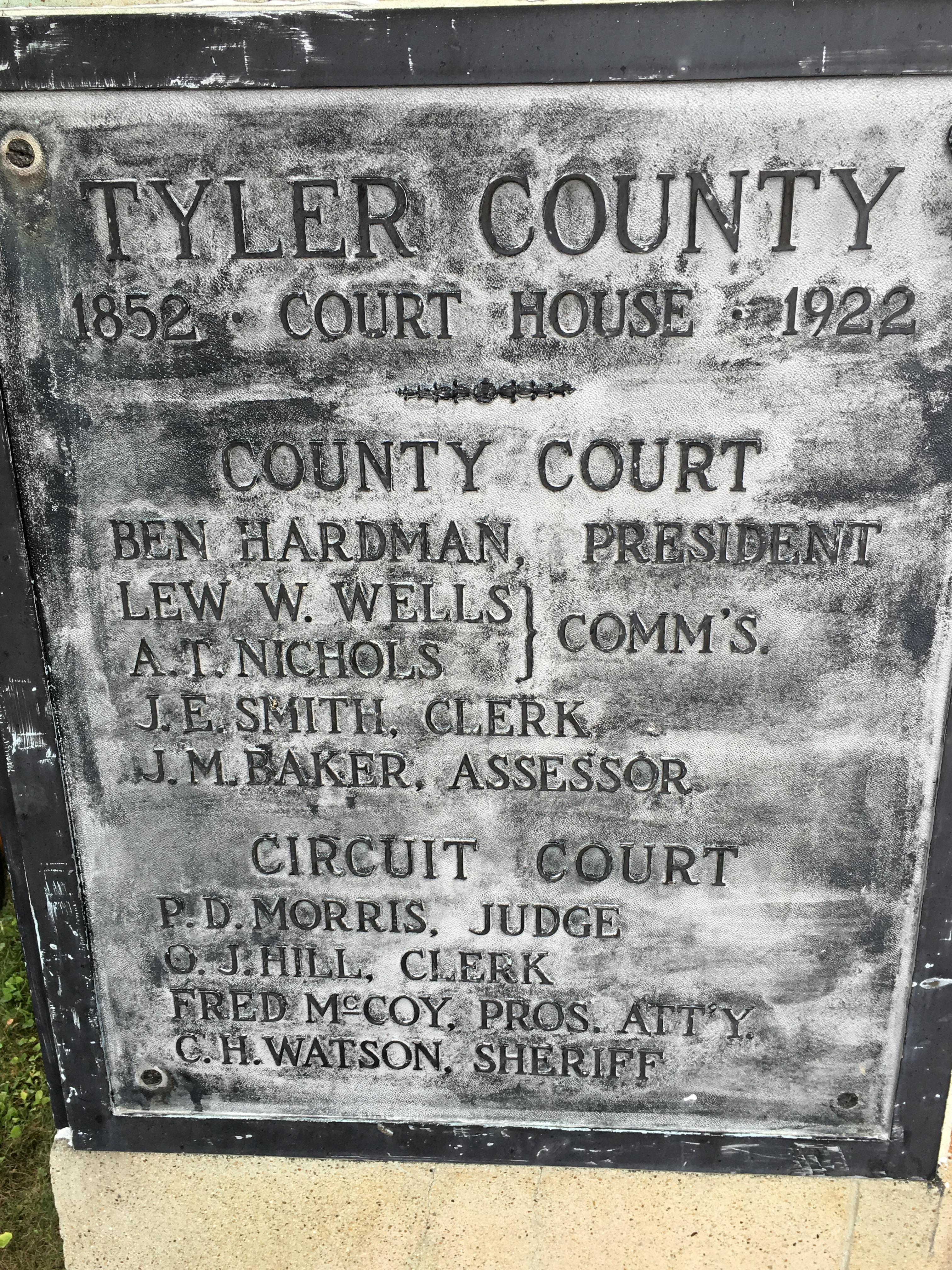 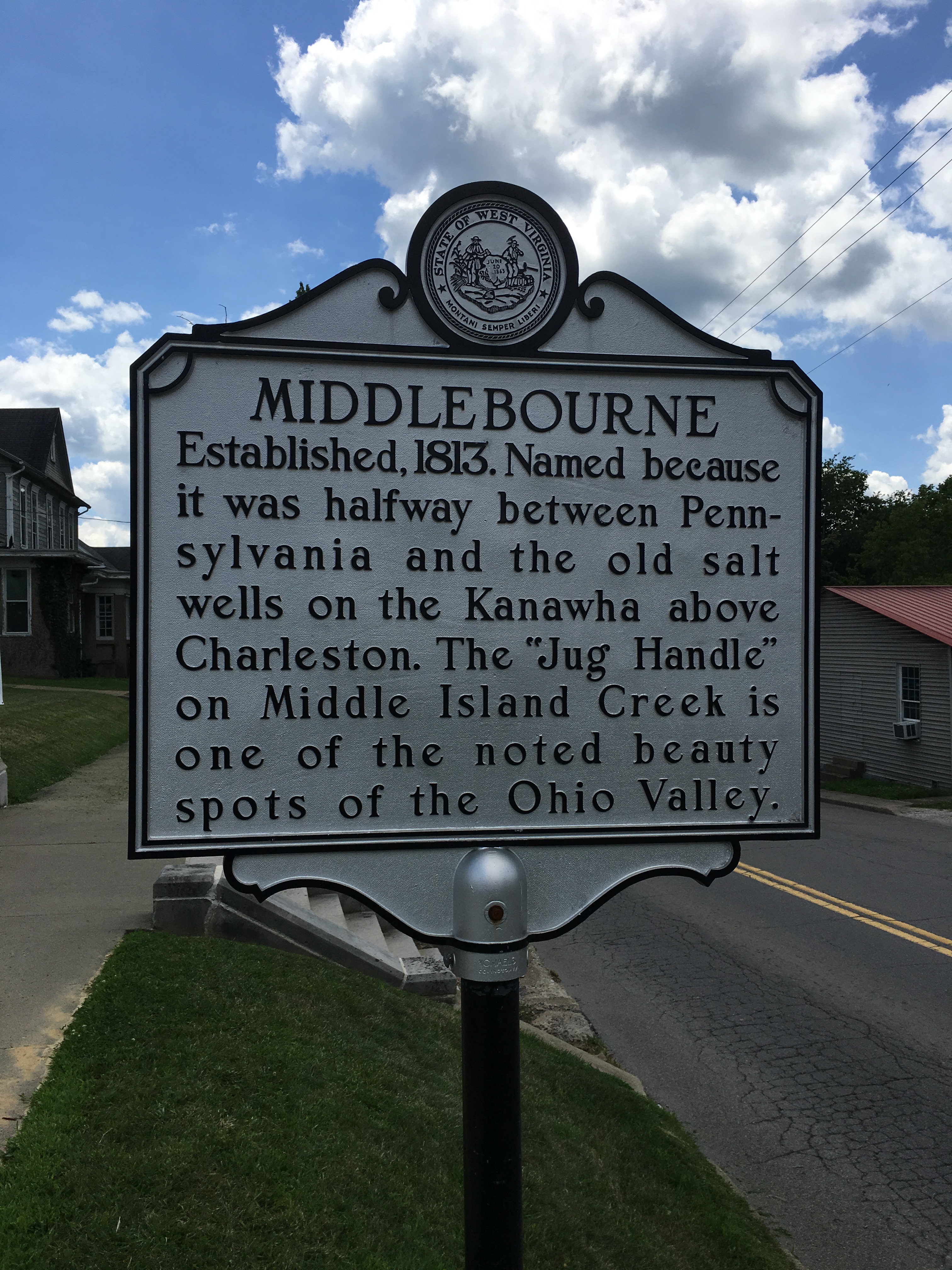 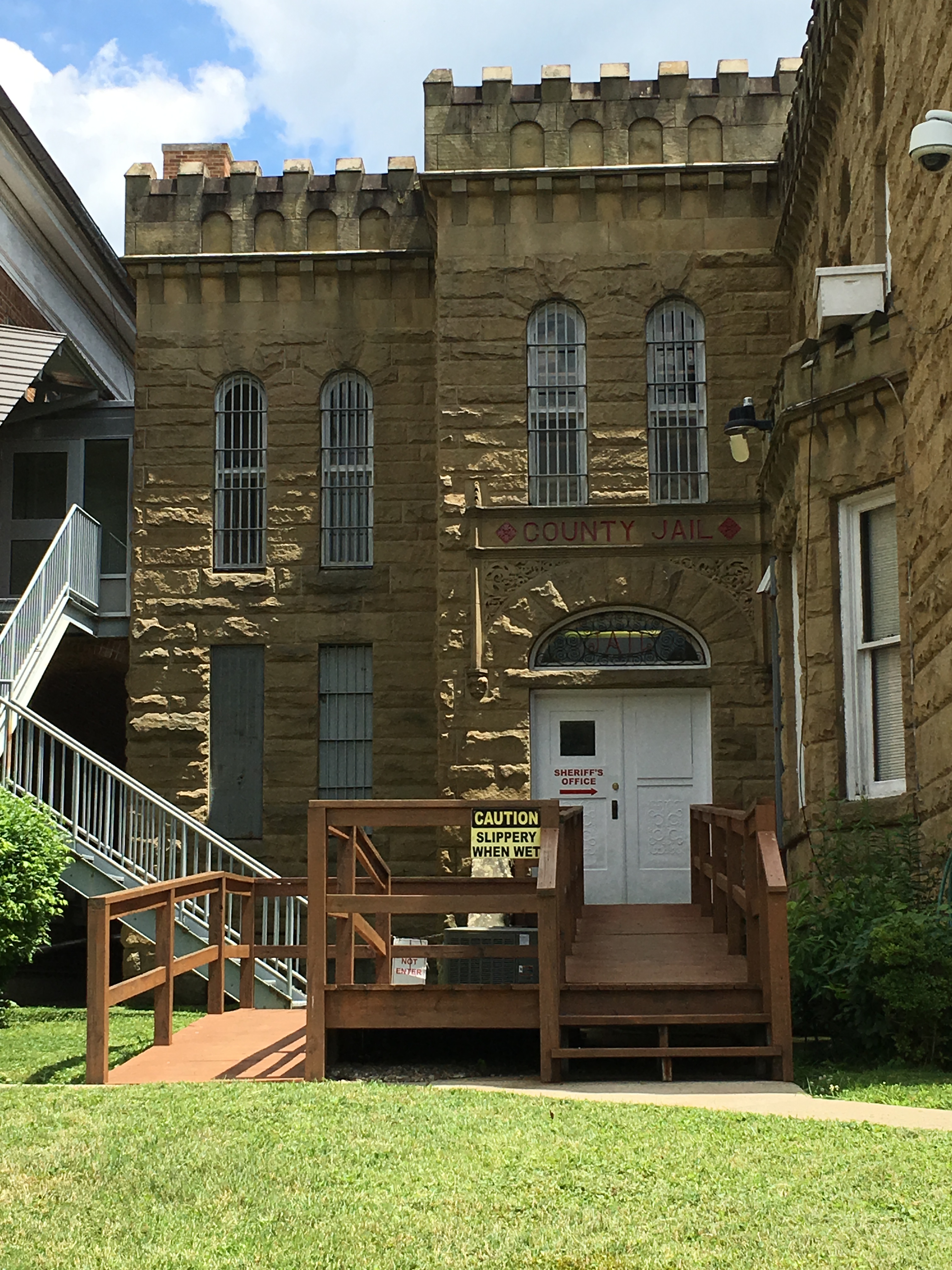 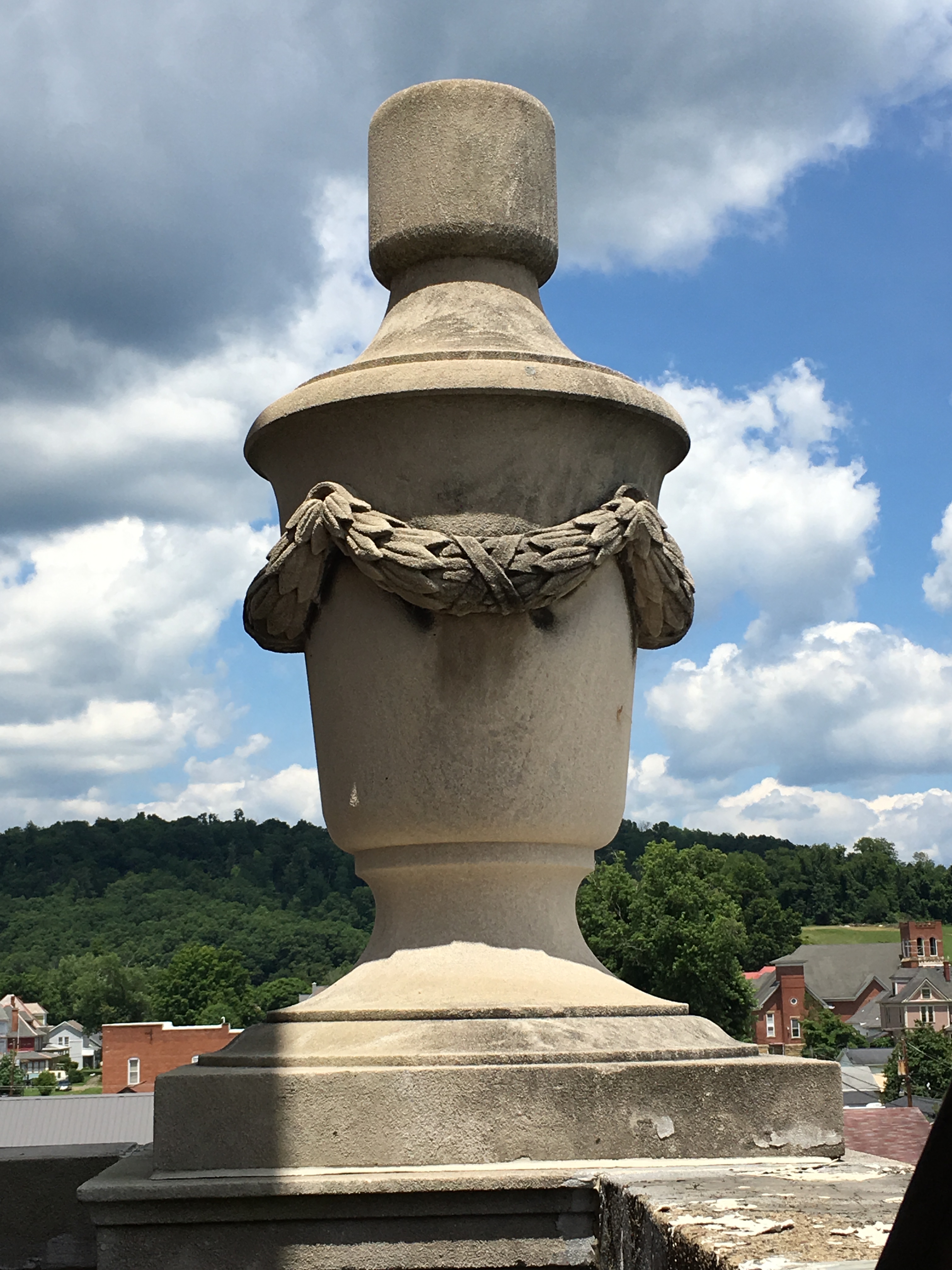 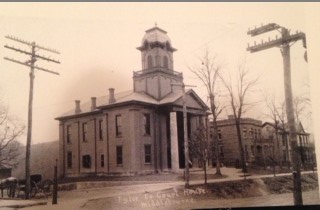 Along the building's pediment Justitia, the lady of justice in mythology, portrays her sitting in judgement with the Sword of Justice in her left hand. (Photograph by author) 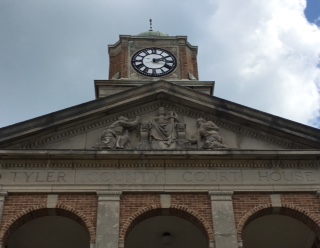 Tyler County Courthouse is located along Main and Dodd Streets in Middlebourne, West Virginia. Tyler County was created by an act of the Virginia General Assembly on December 16, 1814. The Virginia legislature named Middlebourne the permanent county seat in 1816 because of the settlement pattern of the population which concentrated along Middle Island Creek in the vicinity of Middlebourne. The county is named in honor of John Tyler, eighth Governor of Virginia from 1808-1811, and father of John Tyler, the tenth president of the United States.

The town of Middlebourne was established in 1813 by local landowner Robert Gorrell. He and other area residents contributed to the growth of the new county seat by selling house lots. The name of the city reflects its location halfway between Pennsylvania and the old salt wells on the Kanawha River above Charleston.

In 1852, the first section of the present courthouse was constructed as a two story brick structure that replaced the 1820 courthouse. In 1922 the Tyler County Courthouse underwent a complete renovation. West Virginia architects Mr. E.C.S. Holmboe and Mr. Pogue of Clarksburg were employed to design a modest but impressive courthouse that would meet the needs of this small, rural county. The resulting building is a vernacular interpretation of Neoclassical Revival, an architectural style that was popular in the 20th century. In 1923, the courthouse became powered by electricity along with many other neighboring buildings.

The stone and brick for the new construction was transported on flat cars for the face-lifting of the old portion with identical brick via the street car lines from Sistersville. The courthouse entrance is centered with a pedimented two-story arcaded pavilion. Pilasters and balusters of limestone detail the brick arcade of the pavilion’s second level.“Tyler County Court House” is located on the frieze and a relief of pediment depict Justitia, a female figure representing of justice in mythology who sits with the Sword of Justice in her left hand. Justitia is flanked by a male and female who are seeking fairness. The symmetry of the clock tower, which has a brick base with arcaded rail and stone urns, a louvered belfry, and a copper dome, also reflects aspects of twentieth-century classicism and Beaux Arts classicism.

The interior of the courthouse is well maintained and houses county offices on the first floor of the building. A metal staircase at the rear of the first floor takes you to the courtroom on the second floor. The ceiling of the courtroom is an expansive barrel vault appointed with five hanging lights suspended from molded plaster bases. Cornices of the room are richly molded plaster ornamented with modillions. Super-imposed Greek frets complement additional moldings of egg-and-dart and bead-and-reel styles. The rear of the wall of the courtroom is bowed and divided by plaster moldings into large panels, with the center aisle sloping gradually to the front of the room and terminating at the raised judge’s platform with its massive hardwood bench.

The courthouse office of the Clerk of Court maintains the marriage, probate, and land records from 1815, and birth and death records from 1853. For records prior to 1815, you must contact the Ohio County Courthouse, Wheeling, WV. There are several war memorials and a cannon on the grounds. They include one dedicated to veterans of the Civil War, Korean War, and Vietnam War. The military cannon was donated by American Legion Post No. 46 on May 30, 1930. Inside the hallway of the first floor there are the names of the residents of Tyler County who served in World War I and World War II.

In 1818, a log jail was erected at this site followed by the construction of an adjacent courthouse in 1820. The second jail, a brick structure, was erected in 1826, followed by the present day jail in 1874. The jail is massive in appearance due to its heavy rock-faced masonry of sandstone blocks whose openings are flat-headed at the first story and rounded at the second story. The two-story bay at the northwest corner simulating a bastion, crenelated parapets, and a cornice simulating a machicolation. The doorway of the jail wing displays magnificent stonework and an elliptical transom replete with a wrought iron grille.