Located in the historic dredge Captain Meriwether Lewis and operated by the Meriwether Lewis Foundation. The vessel is one of the few surviving examples of its type built to control flooding and improve navigation along the Nation's rivers. 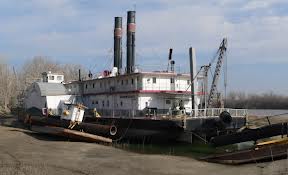 "Built by the Marietta Manufacturing Company in Point Pleasant, West Virginia, the Captain Meriwether Lewis was launched on December 12, 1931. This side-wheel steam paddle dredge was operated by the U.S. Army Corps of Engineers to help channel the Missouri River and to maintain it as a navigable waterway.

This massive vessel, at a length of 268' 11-1/2", housed a standard operating crew of 52, with quarters available for 58 men. The Lewis dredge could dig to a depth of 20 feet at an average speed of 150-200 feet per hour, all powered by the 25-foot steam-propelled paddle wheels. With all three steam engines running, the dredge burned up to 6,000 gallons of oil in a day.

The Babcock and Wilcox marine boilers could produce up to 40,000 pounds of steam or more per hour when dredging. The triple expansion engine that drives the pump turbine is rated at 1,300 hp.  The dredge was pulled forward by the two deck gypsies and not propelled by the paddlewheels when dredging.

In 1976, the Captain Meriwether Lewis was given to the Nebraska State Historical Society and moved to Brownville one year later. It was dry-berthed along the Missouri River where it remains today.

The Meriwether Lewis was designated a National Historic Landmark in 1989. Today, theCaptain Meriwether Lewis houses the Museum of Missouri River History where exhibits from Native American history to exploration and westward expansion can be seen. Visitors can also learn about the vessel and its role in improving navigation on the Missouri River."1