This pedestrian bridge was dedicated in 2004 to honor Des Moines civil rights leader Edna Griffin who lived from 1909 to 2000. Griffin led and participated in a variety of civil rights protests and campaigns, and the dedication of this bridge honors her contributions to securing the legal and civil rights of African Americans in Iowa. 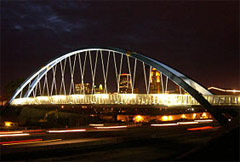 Mrs. Jenny Schiltz's fourth grade class at Longfellow Elementary School won the honor of opening the bridge when their entry - Edna M. Griffin Memorial Bridge - was chosen as the winning entry in the pedestrian bridge-naming contest. 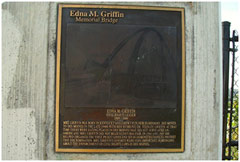 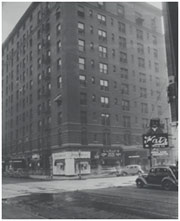 Edna M. Griffin (1909-Feb. 8, 2000) was born in Lexington, Kentucky, and raised in rural New Hampshire as the daughter of a dairy farm supervisor. She claimed to have learned to read by reading The Crisis, a NAACP publication. 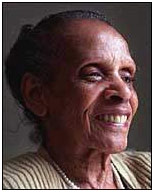 Edna Griffin was born in Kentucky 1909 and grew up in New Hampshire. She later moved to Des Moines in 1947 and the next year joined the Iowa Progressive Party supporting Henry A. Wallace in his presidential bid. She challenged those who would deny Blacks their rights. For example, in July 1948 Edna and her daughter were denied service in Katz Drug Store. It led to a movement to force Katz to obey state laws and treat all patrons equally. She gathered people together outside the store to boycott, formed a committee to end Jim Crow practices at Katz, organized sit-ins, and printed handbills for distribution to Katz customers. She also filed a civil suit against the owner of Katz and testified in a criminal case against the drug store that led to a Iowa Supreme Court decision that helped end segregation.

After the case, she continued to fight for civil and human rights. She participated in the national civil rights movement by founding and serving as the first president of the Des Moines Chapter of the Congress of Racial Equality. Her first action was to organize a mourning day in September of 1963 for the Birmingham children killed in a church bombing by white supremacists.

Edna devoted her life to ensure that all people have equality and a voice.