The Heidelberg Project is an outdoor art installation complex by local artist Tyree Guyton. In 1986, Guyton returned to his childhood neighborhood around Heidelberg Street in Detroit to find it in ruins, plagued with drugs and crime. His response was to transform the surrounding abandoned homes and vacant lots into elaborate street art, and he began by painting his grandfather’s house with multi-colored polka dots. Over the next 30 years, Guyton would use different themes in his art; the Party Animal House had stuffed animals stapled all around the outside while the House of Soul was covered in records. Although it has drawn visitors from all over the world, the Heidelberg Project has also faced intense criticism, demolition, and arson on multiple occasions. 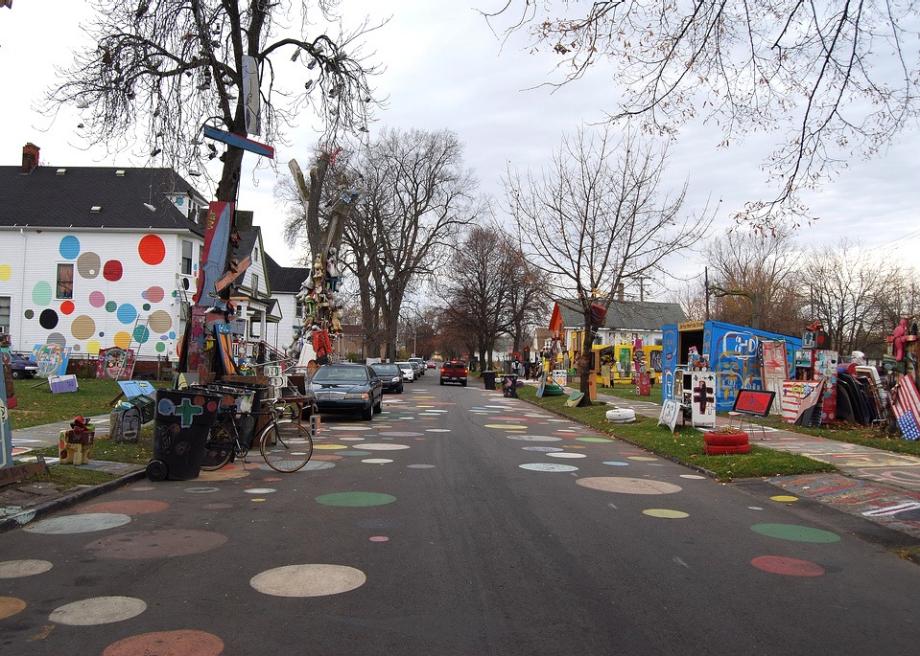 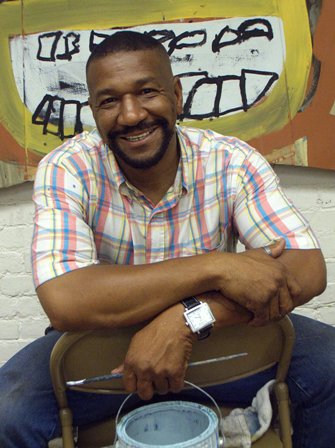 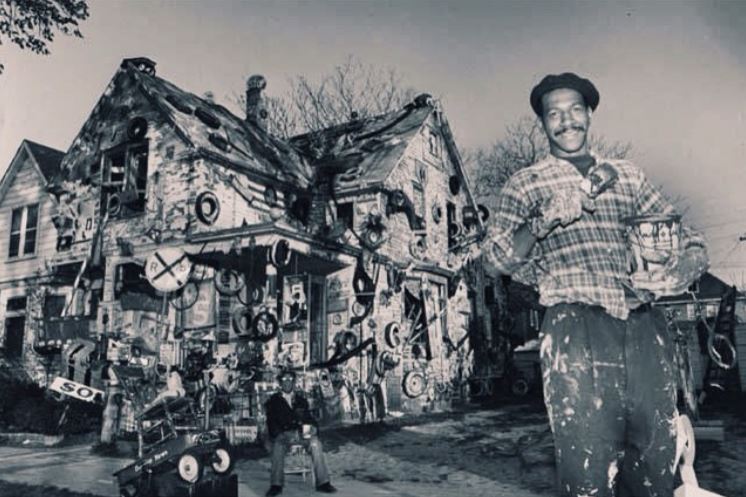 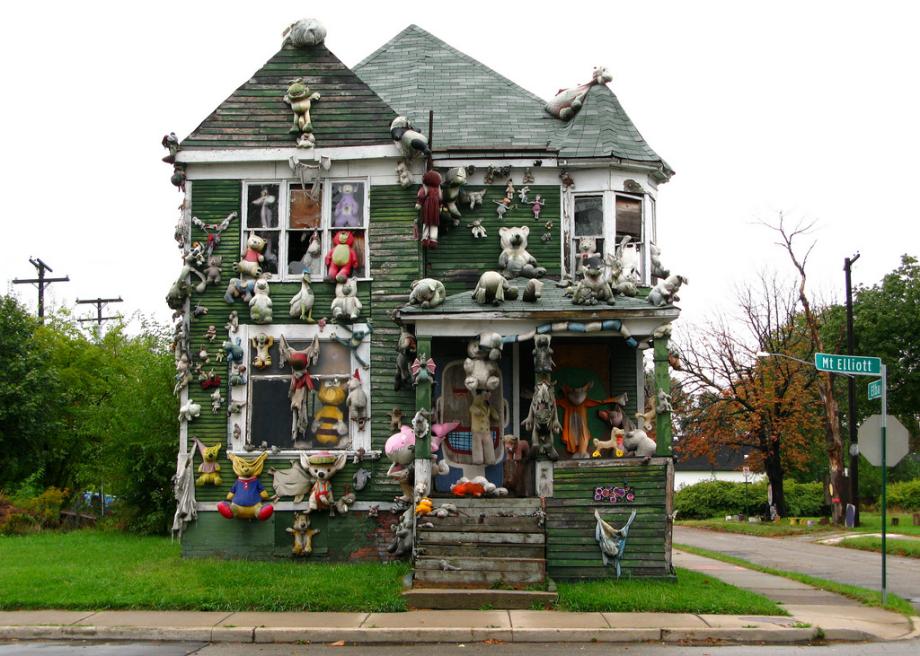 The House of Soul (destroyed by arson) 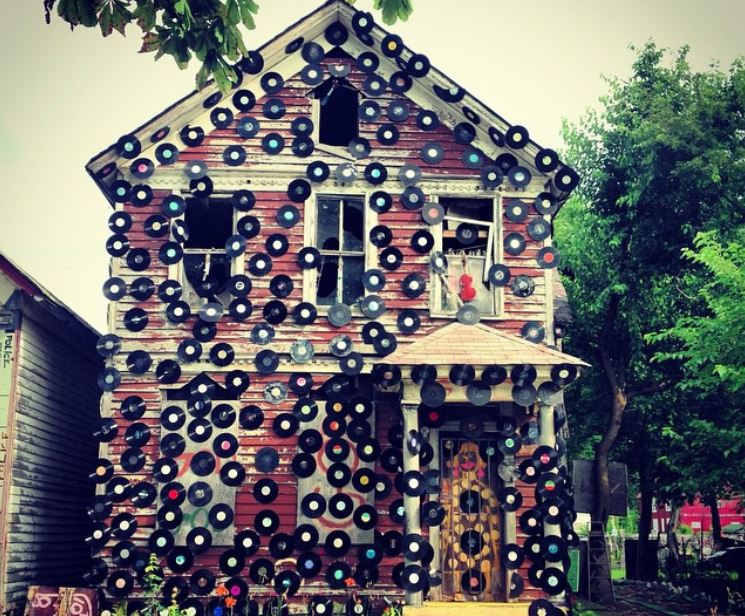 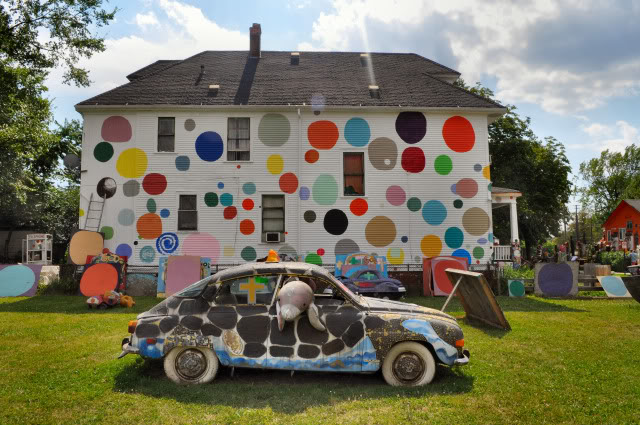 Tyree Guyton grew up on Heidelberg Street in the McDougall-Hall neighborhood of East Detroit. Guyton moved and spent several years away from the area. He returned in 1986 to find that it had become one of the most impoverished neighborhoods in Detroit, mired in crime, violence, and drugs. His grandfather, a housepainter, encouraged him to use art as an outlet. He began by painting his grandparents’ white house with bright polka dots, which would become known as "The People's House", “The New White House,” or “The Dotty-Wotty House." 1

With the help of his family and neighbors, Guyton began to use more bright colors to paint surrounding homes and affix various everyday objects like toys and appliances to the exteriors. Some of the homes developed themes, such as “The Baby Doll House,” which was covered in old stuffed animals. Over the next 30 years, two blocks of abandoned homes and vacant lots were transformed into a multi-colored landscape. The University of Michigan’s Museum of Art hosted an exhibition on the project and had this to say about Guyton’s work: “The project’s lively and unexpected juxtapositions of objects, words, colors, and symbols create a strange and wonderful immersive world.”2

The Heidelberg Project has drawn the attention of neighbors, tourists, city officials, and art institutions. It has gathered praise for Guyton’s innovative approach to urban blight and his commitment to the troubled forgotten neighborhoods of Detroit. However, it has also faced critics who say that it is simply junk rather than art, a health hazard, and a place for outsiders to come and gawk at the misfortunes of the people who call the neighborhood home. The City of Detroit partially demolished the project in 1991 and in 1999 after complaints that the art project had become an eyesore. Between 2013-2014, a total of 12 arson attempts were made on the Heidelberg Project. Nine of the homes were a total loss, and the arsonists were never caught. Guyton has remained undeterred in his dedication to his community and his huge ongoing art project. He rebuilt several destroyed installations and continues to take an optimistic view, saying “I just want to send out love.” 3