Located at the south end of Washington Park, South High School serves as a monument to the high design standards applied to Denver’s public schools in the days of the City Beautiful movement. Completed in 1924, the massive red brick structure represents a unique variation on the Romanesque style of northern Italy. Its clock tower, easily visible from nearby I-25, rises above the trees of the Washington Park neighborhood. Seen more closely, the school boasts such inventive details as a “protector” gargoyle, witty Romanesque-style carvings of scholastic life, striped stone trim inspired by the buildings of medieval Italy, and a clock with symbols of the zodiac in place of numbers. 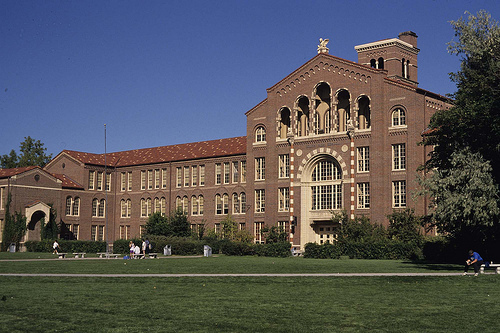 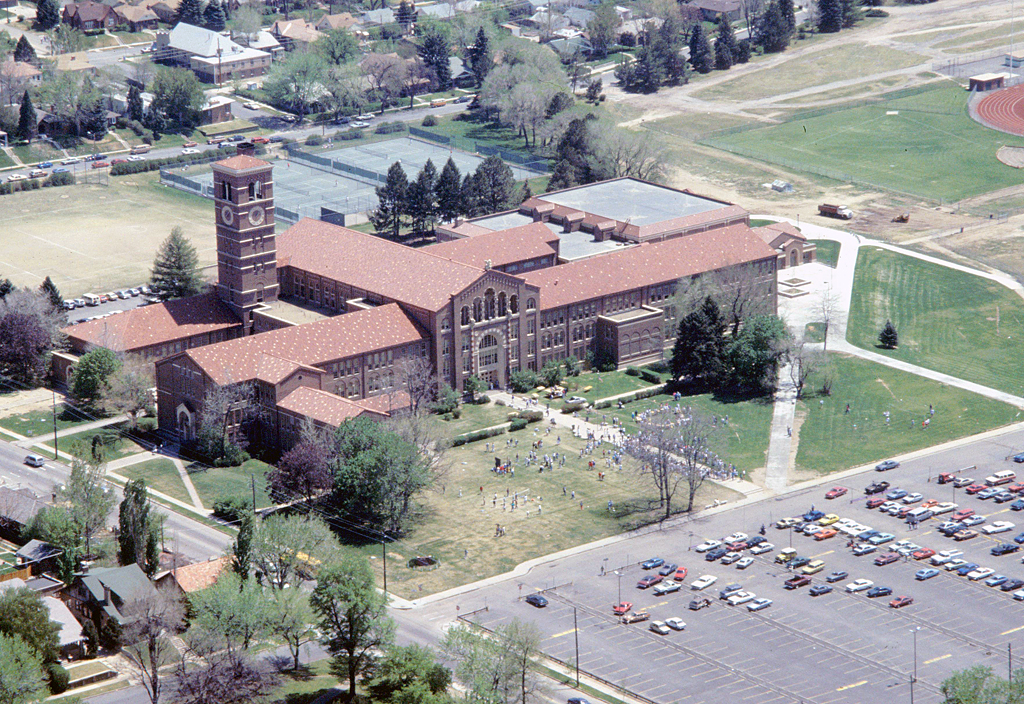 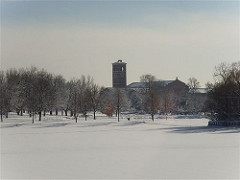 South High School began as the high school division of the Grant School (now Grant Middle School), located in the Platt Park neighborhood. By the early 1920s, overcrowding had a made a separate high school for south Denver a necessity.  The location chosen was a large tract of land at the south end of Washington Park.  City planners, influenced by the ideals of the City Beautiful movement, chose to place new high schools near parks and boulevards, and South High enjoys the same relationship to Washington Park as East High does to City Park.  Civic leaders also demanded a high standard of design for Denver’s public schools, and South High School is one of the most impressive products of the policy.

The creation of local firm Fisher and Fisher, the architecture of South High draws on Italian buildings of the Romanesque era for inspiration.  Architects William E. and Arthur A. Fisher looked to the Basilica of Sant’Ambrogio in Milan as a model.  The school’s architects borrowed various elements of the twelfth-century Italian basilica including red brick walls with striped trim and an entry featuring a rounded Roman arch flanked by similar arches  of decreasing size. The school’s clock tower is also thought to have been influenced by the bell tower of the church of Santa Maria in Cosmedin in Rome, another  twelfth-century structure.

The most distinctive element of the school’s fabric may well be its friezes and statuary, the work of Denver sculptor Robert Garrison. Garrison’s contributions include the gargoyle, over a yard tall, perched atop the roof, said to be the symbolic protector of the school and its occupants. Garrison also created numerous carvings and reliefs done in the style of the Romanesque era, but related to the building’s use as a high school.  The frieze above the entry porch, nicknamed “Faculty Row”, depicts the school’s administrators; a second frieze, representing the student body and known as “Animal Spirits”, appears above the doors  and shows students shooting rubber bands, among other forms of misbehavior.  The monstrous figures atop the striped columnns on either side are said to represent final exams: they stand on top of students clutching books.

The clock faces on each of the  four sides of the clock tower are also unusual, as they show the symbols of the zodiac in place of numbers.  They are said to be one of only two examples of zodiac clocks in the western United States.  The clockworks were maintained for decades bya retired rocket engineer living in the neighborhood. The school itself continues to function as a four-year high school within the Denver Public School system, serving a diverse student body made up of neighborhood children and students from across the city who choose to take advantage of its programs.