Built as a winter residence for James Deering, an executive of the International Harvester company and one of the wealthiest men in the country in the early 1900s, Vizcaya was the site of lavish parties between its completion in 1916 and Deering's death in 1925. The mansion was built to resemble an Italian estate with seventy rooms featuring Deering's collection of antiquities from around the globe. Deering was a bachelor when he died and his estate passed to his nieces. Over time, the family sold most of the land around the mansion before deciding to donate the house and its furnishings to create an art museum for the public. The estate is listed on the National Register of Historic Places while the gardens and galleries offer a world-class public museum. 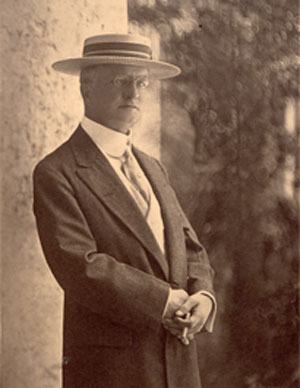 Map of the estate published in Architectural Review, 1917. 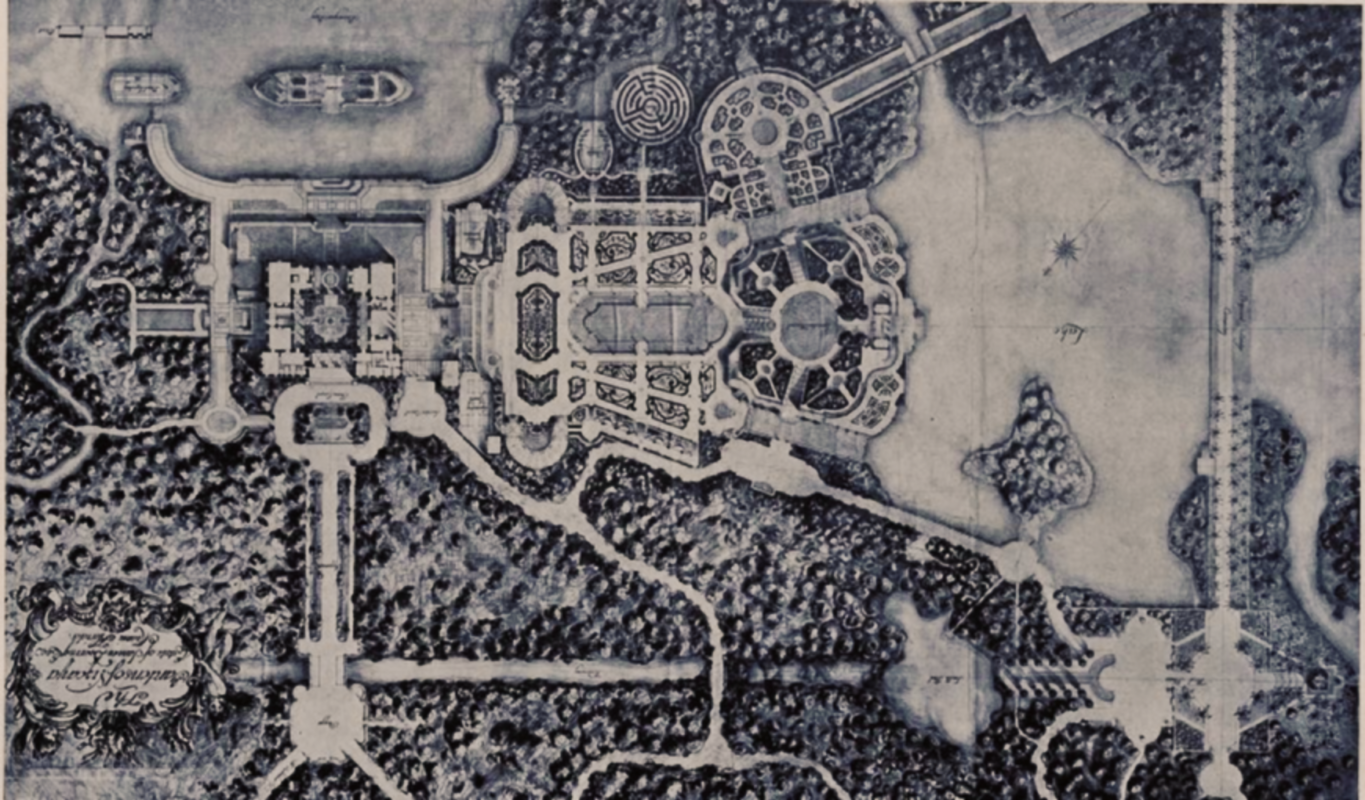 Architectural plan for the Villa.

Aerial view of the estate. 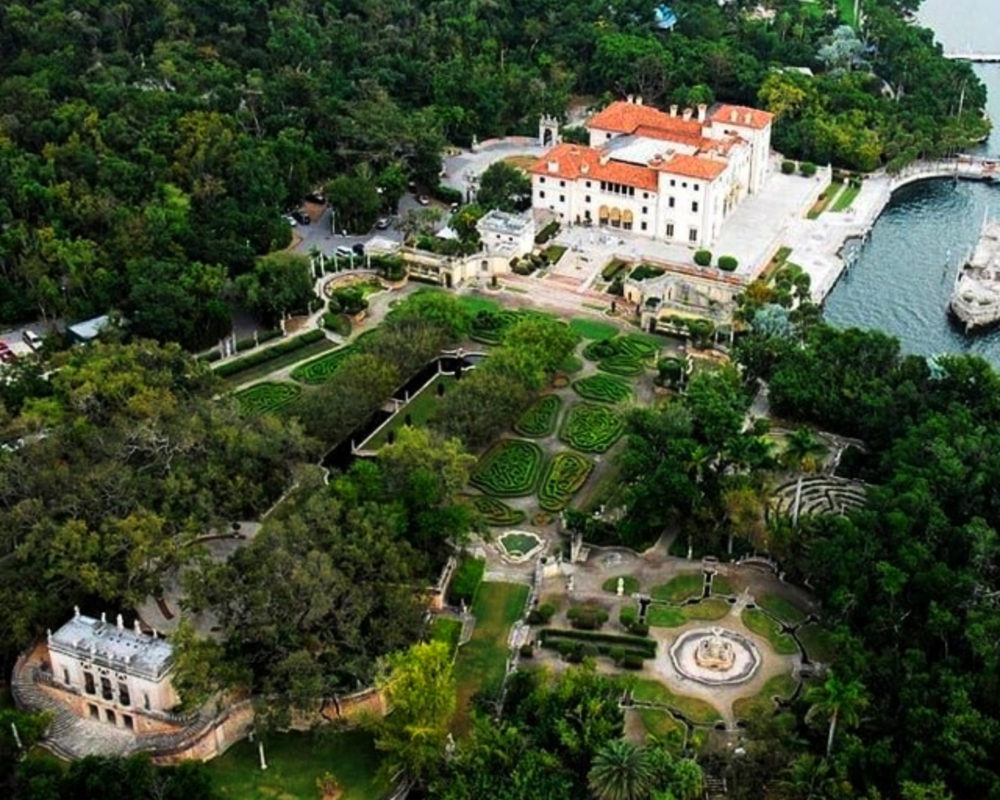 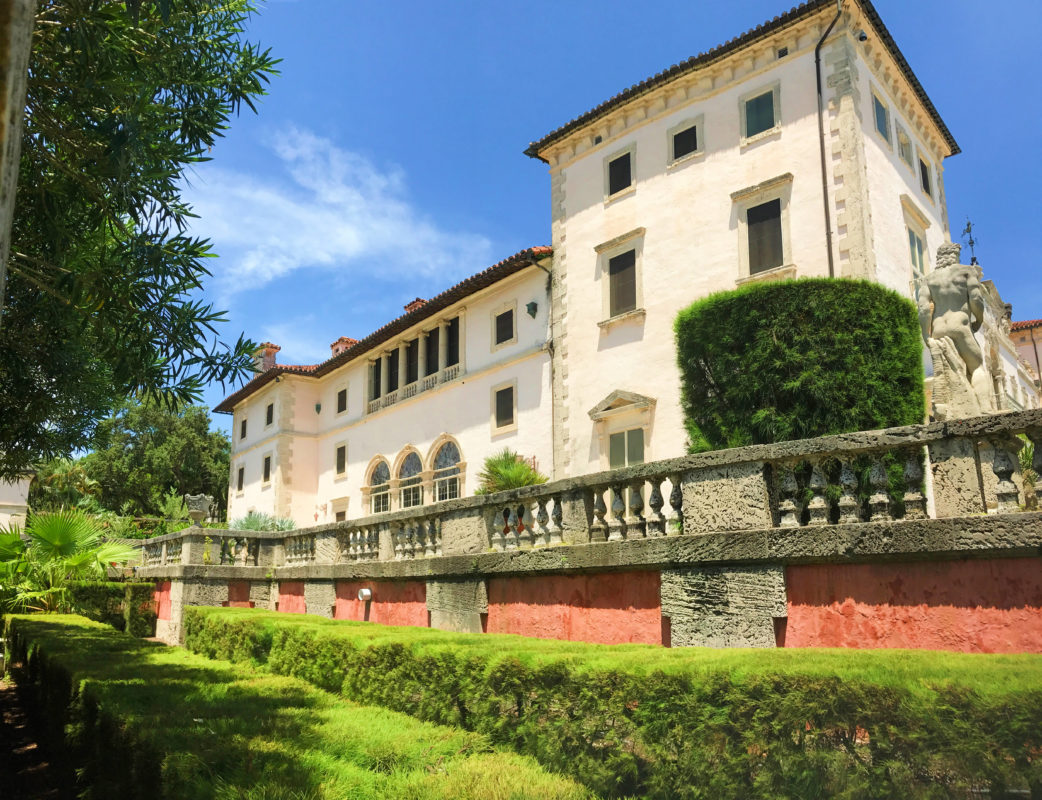 A reflecting pool in the gardens. 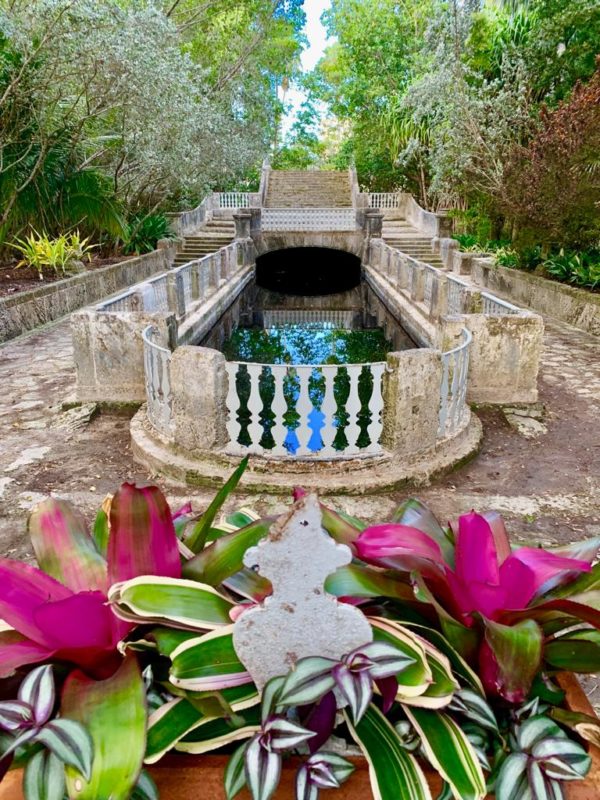 One of many sculptures placed throughout the grounds. 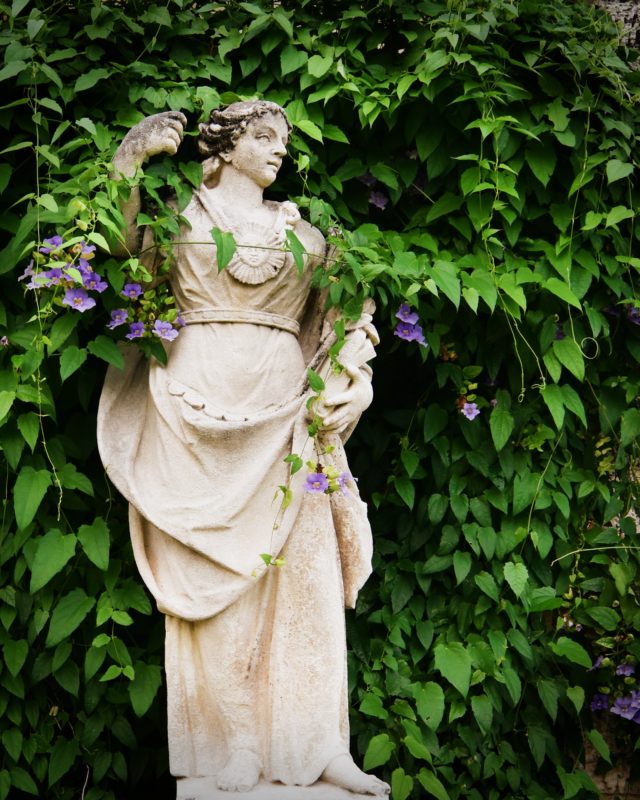 Businessman James Deering, wealthy from his ties to Deering McCormick International Harvester Company, was also a conservationist. For this reason, he purchased one hundred eighty acres of mangrove swamp in southern Florida on which to build a vacation estate. Several accounts offer explanations for why Deering named his estate Vizcaya. One account suggests that the name was taken from a Spaniard who Deering believed had explored the area some centuries before. However, the explorer’s name was actually Vizcaíno. Another possibility is etymological. Vizcaya means “an elevated place” in Basque. A final possibility is a common belief that one of Ponce de Leon’s ships was named Vizcaya. Regardless of how the name came about, construction began on Villa Vizcaya in 1912. Over one thousand local people – approximately ten percent of Miami’s population at the time – worked on some aspect of the estate. In addition to the villa itself, the grounds included extensive gardens, lagoons, and even a small village for support staff. World War I made supplies and skilled tradespeople difficult to come by but despite this, the main building was finished by 1916. Deering arrived on his yacht on Christmas day of the same year to officially establish Vizcaya as his winter residence. Construction of the gardens and village continued for another seven years before finally completing in 1923. Deering occupied Vizcaya from roughly November to April each year until his death in 1925.

F. Burrall Hoffman, Jr. was commissioned as the architect for the buildings at Vizcaya. Hoffman visited the site in 1913 to make preliminary drawings before immediately setting out to Europe to study Spanish and Italian manor homes. Though Villa Vizcaya is not an exact copy of any other building, it incorporates elements of Villa d’Este, in Tivoli; Villa Lante, in Bagnaia; Ca’Rezzonico, in Bassano; and Palazzo Farnese, in Caprarola. The home includes seventy rooms across two primary floors. It was the first and largest manor of its type to be built in Florida. Due to its relatively low profile, Villa Vizcaya sprawls across the grounds in an almost organic fashion. Hoffman’s finished design has a distinctly Baroque flavor, but the house featured many modern adaptions at the time of construction. The frame of the building is primarily reinforced concrete. Amenities included water filtration systems, a generator to provide electrical power, central heating and ventilation, two elevators, a vacuum-cleaning system, and a partially automated laundry room. Hoffman also designed Vizcaya Village, a collection of eleven buildings designed to make the estate self-sufficient. The village included lodging for staff, mechanical workshops, and greenhouses. Final costs for Vizcaya were $15 million – over $358 million adjusted for inflation.

The interior of Villa Vizcaya received just as much attention as the exterior. Deering employed Paul Chalfin to help appoint the manor. Deering and Chalfin toured extensively throughout Europe before construction on Vizcaya was even begun. The two men selected styles they thought would be appropriate for the estate and purchased furniture, decorative art objects, and fine art pieces. When these works were moved into the house upon its completion, they were organized by geographic region and stylistic influence. For example, the Milan Room served as a music space, the Palermo Room served as a reception area, and the Venice Room served as a bedroom. The intention of Chalfin was not to create an exhaustively comprehensive or historical collection. Works were chosen foremost for their aesthetic value, and any other value was an incidental bonus.

The final principal creative mind behind Vizcaya was Diego Suarez. Saurez was responsible for planning and executing the many acres of grounds that surrounded the Villa. Much of the grounds were occupied by gardens designed in French and Italian styles. Despite their ordered appearance and careful engineering, the gardens convey an impression of spontaneity and naturalism. Sculptures from eighteenth century Italian gardens – especially those around Rome – serve as accents in the gardens. New sculptures were also commissioned. The new sculptures were carved from a soft porous coral stone, which made them look weathered almost immediately. Complementing the weathered appearance, Deering made the astute decision to maintain indigenous wildlife in addition to planting more traditional garden flora. Thanks to the transplantation of older statues, artificially weathered stonework, and maintenance of existing plants, the gardens at Vizcaya appear timelessly ancient.

When Deering died in 1925, he was a bachelor. Vizcaya passed to his nieces, Marion Deering McCormick and Barbara Deering Danielson. Neither of the two women ever occupied the estate, which began decaying. Beginning in 1945, they started selling portions of the estate’s grounds until just fifty acres were left. In 1952, Miami-Dade County purchased a significantly degraded Vizcaya for $1 million. The manor reopened as the Dade County Art Museum the next year. Since its transformation into a museum, Vizcaya has developed a history beyond Deering’s ownership. Many movies, such as Tony Rome, Ace Ventura: Pet Detective, and Iron Man 3, had scenes filmed at Vizcaya. A 1971 robbery of the Villa made national news. Objects stolen were valued at more than $1.5 million. Many of the items were never recovered, including a silver bowl that once belonged to Napoleon Bonaparte. In 1987, the house was the meeting place of Ronald Reagan and Pope John Paul II when the Pope first visited Miami. Bill Clinton also convened the First Summit of the Americas which created the Free Trade of the Americas at Vizcaya in 1994. The estate is a popular location for quinceañera photos.

Though the name has changed, Vizcaya Museum and Gardens today greatly resembles the Dade County Art Museum. Visitors can walk through the house and view Deering’s extensive collections of art and furniture. Additionally, Vizcaya is the subject of many dedicated restoration and conservation efforts. These efforts include protecting the architecture from the twin dangers of salt water and hurricanes and ensuring that art objects are well maintained. One example of a space in particular need of preservation is the swimming grotto. This pool area features a mosaic by famous American artist Robert Winthrop Chanler and is one of only two extant mosaics by the artist. In addition to preserving human-made objects, Vizcaya Museum and Gardens also manages the natural features of the grounds. Trees are catalogued, native undergrowth is permitted to flourish, and a collection of over two thousand orchids is cared for. Visitors to Vizcaya can simultaneously experience the lush landscaped gardens, a renowned collection of baroque European art objects, and a rich past that implicates major historical figures.

"Vizcaya as a Museum." Vizcaya Museum and Gardens. Accessed on July 12, 2014. http://vizcaya.org/about-vizcaya-as-a-museum.asp