Miami Circle at Brickell Point is an archaeological site roughly dating from 500 B.C. to A.D. 750. The 38-foot site consists of 24 basins and 600 postmolds dug into the limestone bedrock, evidence of some sort of prehistoric structure, though archaeologists are still researching what its purpose would have been. This site was the primary village of the Tequesta people, who lived in southeastern Florida for around 2,000 years. Miami Circle is significant for being the only known prehistoric structure built into bedrock in the Eastern United States. Thoroughly studied by archaeologists, the site also enhances understanding of indigenous architecture, ceremonial traditions, and trade. The site was discovered in the 1990s during the construction of a proposed condominium. Miami Circle was preserved thanks to concerned scholars, Native Tribes, and citizens, who continue to advocate for its protection under state ownership. It is listed as a National Historic Landmark for its association with the Tequesta and archaeological significance.

Visitors can explore the surrounding park and should exercise caution and respect when near Miami Circle, a fragile and sacred Native site. Wikimedia Commons. 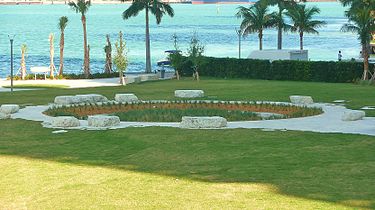 Archeological studies date the Miami Circle site to 500 B.C. to A.D. 750, when the Tequesta people thrived in southeastern Florida. HistoryMiami. 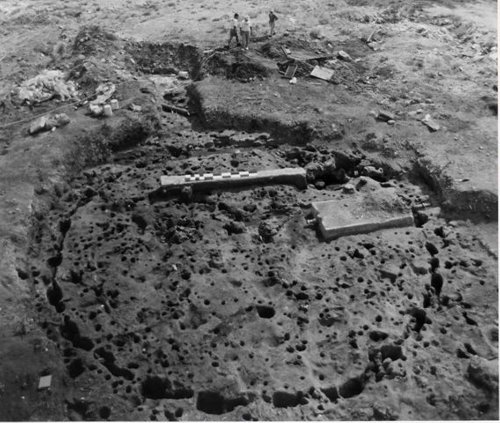 This illustration of Miami Circle shows prehistoric features, such as the postholes, basins, and archaeological findings, as well as modern disturbances to the site, like a nearby apartment's septic tank. Florida Bureau of Archaeological Research. 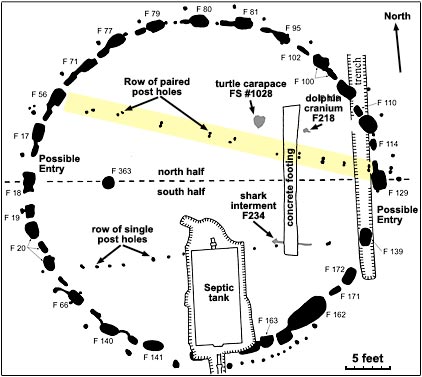 Miami Circle Park opened in 2011 and helps preserve and interpret the archaeological and historical significance of Miami Circle and Brickell Point. Wikimedia Commons. 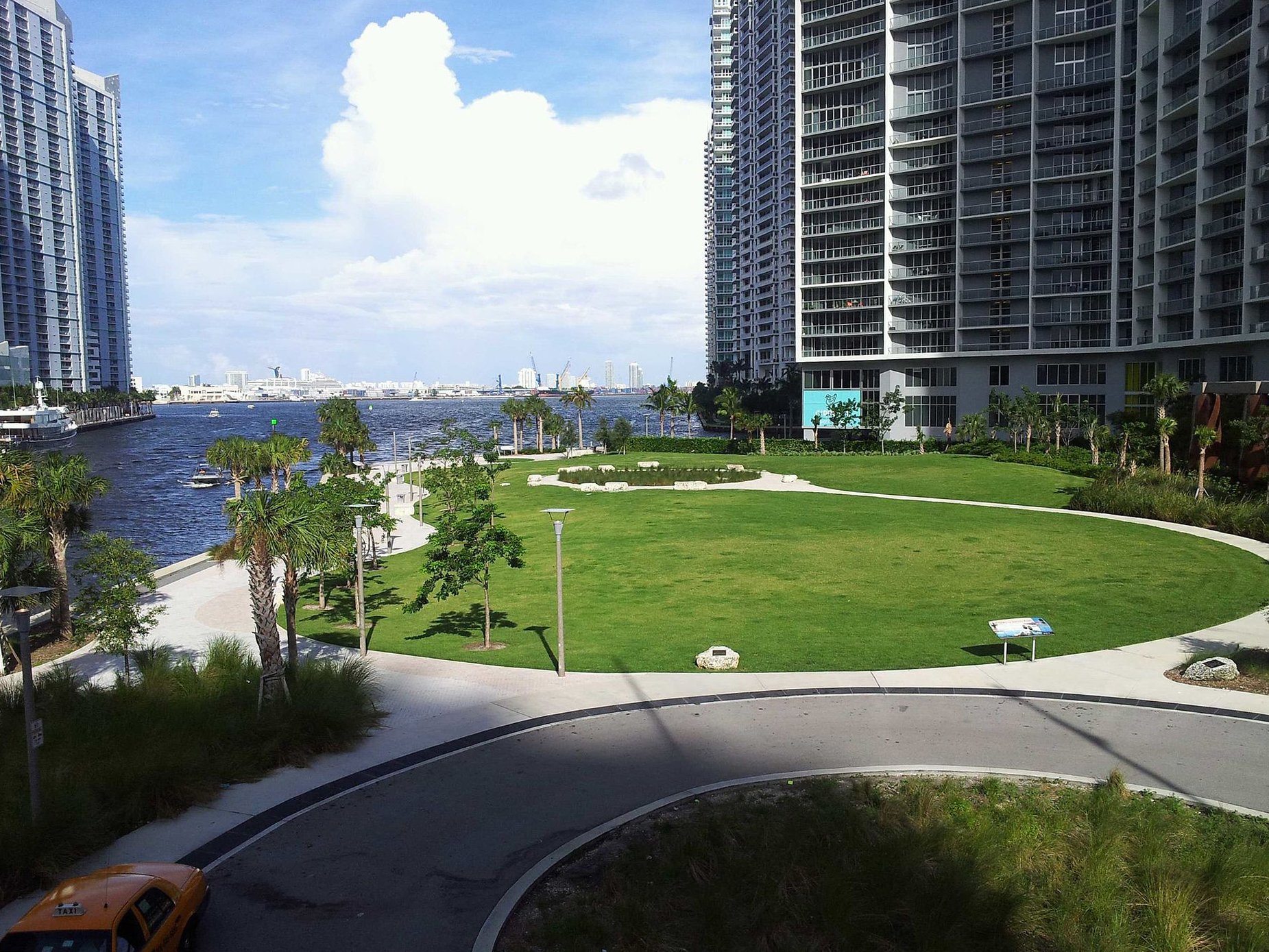 Miami Circle is one feature of Brickell Point, a 2.2-acre section of land along the Miami River. Brickell Point was once occupied by the Tequesta, a small indigenous tribe that settled in what is now southeastern Florida in the third century B.C.  For 2,000 years, the Tequesta utilized the Miami River and other local waterways for gathering food, traveling, and conducting trade with networks of other tribes in what is now the southeastern United States. Brickell Point would have been a busy coastal village with shelters, a port, ceremonial mounds made of sand or rock, and a cemetery.

According to radiocarbon dating and deposit studies, Miami Circle is believed to date to the early and late Glades I periods, from approximately 500 B.C. to A.D. 750. More broadly speaking, the site dates to the early and Middle Woodland stage of prehistory (ca. 1000 B.C. to A.D. 500). The site continued to be occupied well into the second and third Glade periods, dating from A.D. 1400 to 1763.

The Miami Circle site consists of postholes and basins dug into the Miami Limestone bedrock, a type of limestone that formed in the shallow seas of southeastern Florida around 125,000 years ago.  Research has given archaeologists a sense of what the site would have looked like in prehistoric times. The area around Brickell Point would have been surrounded by a cluster, or “hammock,” of hardwood trees and mangroves. According to the National Register of Historic Places, the Tequesta had a “distinct impact on the landscape.” The area around Miami Circle was likely a “a significant clearing occupied by residential structures, enclosures, smaller storage buildings, racks for roasting food, cooking fires and the like.”1 Some trees provided shade and materials for shelters, canoes, and firewood. Construction likely required digging through a thin layer of soil and boring into the soft limestone. This method of construction is unusual and makes Miami Circle the only known example prehistoric structures built into bedrock in the Eastern United States.

In the sixteenth century, the Tequesta were one of the first tribes encountered by Juan Ponce de Leon and Spanish admiral Pedro Menéndez de Avilés established a mission at the site. Their customs, however, remained strong for 250 years after European contact, contrasting most indigenous groups in the Southeast. While under Spanish law in the eighteenth century, the Tequesta were forced to convert to Christianity and driven out of their ancestral land.

After the Tequesta were forced to flee southeastern Florida in the late eighteenth century, the Miami Circle property was owned and occupied by various settlers. The United States acquired Florida from the Spanish in 1821, Rebecca Egan, the widow of a land surveyor, acquired 640 acres of land that included Brickell Point. The land passed through several hands in the mid-nineteenth century, with a plantation and small village occupying the site. Around 1870, William and Mary Brickell acquired almost the entire original Egan property. William Brickell co-founded the city of Miami with Julia Tuttle in 1896. In the coming years, the Brickells constructed a boathouse, docks, a mansion, and other outbuildings at the Brickell Point site, none of which are standing today. The land was parceled out and more construction continued. The Brickell Point Apartments, built in 1950, caused the most significant damage to the archaeological site.

In 1998, the apartment complex was purchased and demolished by Michael Baumann, who intended to build new luxury condominiums on the site. Following a routine archaeological survey, surveyors discovered postholes and basins carved into the Miami Limestone bedrock and myriad Tequesta Indian artifacts. Nearby archaeological sites had been found and described as early as the 1940s. When news broke of the discovery of Miami Circle, a few individuals claimed that the site was not prehistoric but part of a twentieth century septic system or gazebo. Archaeological studies and Native tradition refuted these claims.

Modern Native Tribes recognize the Miami Circle as sacred grounds and are compelled to protect these sites. Seeing their boundaries of kinship and land as more fluid than non-Natives, the Tribes see much of southeastern Florida and the Keys as “a Special Place…it cleanses the water and the air and systems of the earth… It is the Sacred Circle of the Life of All Creation of the Earth,” in the words of Spiritual Leader Bobbie C. Billie.2 A local Carib Tribal Indian, Catherine Hummingbird Ramirez, has been known to hold a candlelight vigil on Tuesday nights since the discovery of the site.

Today, the site is owned by the Florida state parks system and requires careful, and not always received, preservation. It is part of the Miami Circle Park, which opened in 2011 and offers interpretation of the site. Miami Circle is listed on the National Register of Historic Places and was declared a National Historic Landmark for importance to Native history and archaeology.