The Ida Tarbell House in Easton, Connecticut, is a farmhouse that was the home of muckraker journalist Ida Tarbell. She purchased the property in 1906 with proceeds from her two-volume book on the Standard Oil Company and lived in the home, which she called Twin Oaks until her death in 1944. 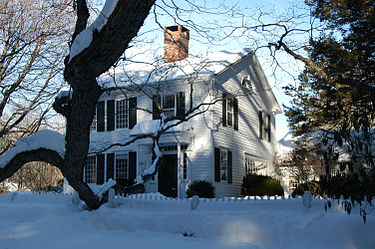 In her most famous work, The History of the Standard Oil Company (which oil historian Daniel Yergin called the “most important business book ever written”), Miss Tarbell revealed, after years of painstaking research, the illegal means used by John D. Rockefeller to monopolize the early oil industry. Yet Miss Tarbell interspersed in her condemnation of Standard Oil’s illegal practices, praise for Rockefeller’s enormous accomplishments in organizing and stabilizing a volatile industry. She rejected being labeled a “muckraker” (despite its popularity), because “I was convinced that in the long run the public they were trying to stir would weary of vituperation, that if you were to secure permanent results the mind must be convinced.”

Ida Tarbell had many opportunities to capitalize on her reputation as one of America’s most respected journalists. Instead, she rejected the pleas of the suffragists to endorse their causes because they contradicted her own convictions about the role of women. In 1914, Henry Ford and others tried unsuccessfully to have her join the celebrity-laden “Peace Ship” to bring an end to World War I. She considered it totally unrealistic and said so. In late 1916, she turned down President Wilson’s offer to make her the first woman on the Tariff Commission because he believed she had written more common sense about the tariff than any man. Finally, she put off writing her autobiography until she was eighty years old, and even then it was a work of such modesty and self-effacement that it added little to her popularity.

The lasting results of Ida Tarbell’s brand of investigative journalism, which include the 1911 Supreme Court decision to break up the Standard Oil trust, suggest that her career, characterized by thoroughness, fairness, and intellectual integrity, should be studied by any journalist more interested in recording and influencing events that achieving celebrity status.

Private residence- do not trespass