The Fetterman Massacre occurred in the area of Banner, Wy, three miles outside of Fort Phil Kearney. Troops were ordered by Carrington to avoid the Indians outside of the fort walls. The Indians lured the troops into fighting around the timber areas, they had gather the wood outside of the camp. Over eighty men died including Captain William Fetterman. They lasted only a half hour against the Chief Red Cloud, Red Cloud had over 1000 to 2000 men waiting for them over the hill. Today they have a monument marking the spot that Fetterman and his men made their last move as an Army. Ulysses S. Grant made orders to abandon the forts in this area in 1868.

The Fetterman Monument is three miles give or take from Fort Phil Kearney. 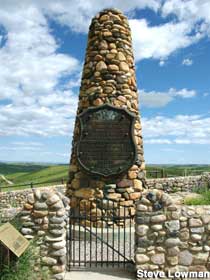 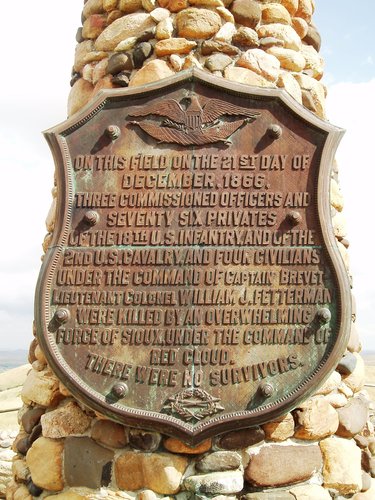 Colonel Henry Carrington manned the nearby fort named Fort Phil Kearney and had ordered his men to ignore the Indians tricks for an ambush. One officer named Captain William Fetterman new to the fort had orders to relieve a wood cutting detail about three miles away from the fort. Fetterman and Carrington may have had plans of an offensive encounter on the Indians as Shannon Smith wrote in her article called "New perspectives on the Fetterman Fight." The suspicion she may have went on was when Carrington wrote in his official report the following, "evidently moving wisely up the creek and along the southern slope on Lodge Trail Ridge, with good promise of cutting off the Indians.” Stories are wrote that Fetterman strictly disobeyed Carrington completely, either/or the men that day lost the fight in a half an hours time after the encounter.

Chief Red Cloud intended to keep his surrounding territory and would cause trouble to do so. With new settlements moving west onto or across the territory, Red Cloud would ambush anyone who crossed. The US Army was sent to protect the Wyoming and Montana trails and set up post along these paths for safe passage. The new found gold in the west and the building of the railroad just south of the Banner Wyoming led hundreds to their deaths on the Bozeman and Oregon trails. Crazy Horse arranged one to two-thousand men over a hill out of sight and would taunt the army into chasing him. The Indians shot the Army down when they came to the hill with arrows that Blackened the sky.

After the Wagon Box Fight, Ulysses S. Grant invited Red Cloud to sign the Treaty of Laramie giving the Sioux Indians and allies the land of the Powder River Country. Red Cloud refused to sell any of the land to white settlers after the treaty was signed. Large amounts of buffalo was disappearing from the lands due to the Indian Bureau, they would provoke railroad workers and whites to kill the buffalo and to starve the Indians into adapting to the new ways of the white man. Wars broke out after some Indian tribes left their territory and then the army was sent to put them back on the reservation. Some of the battles that some may recall are the Battles of Rosebud Creek, Little Bighorn, Wolf Mountain and Wounded Knee.