A leading businessman in Houston, John Kennedy immigrated to Texas from Ireland in 1842. He operated several baked goods stores in the city before building the structure indicated by this marker, which he built in 1860 as a steam bakery. The building remained in the Kennedy family until 1870. It was placed on the National Register of Historic Places in 1979. 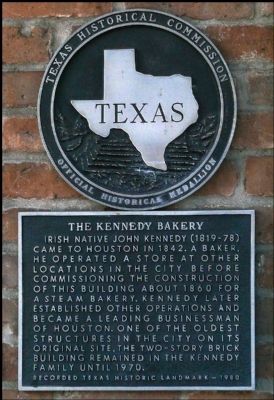 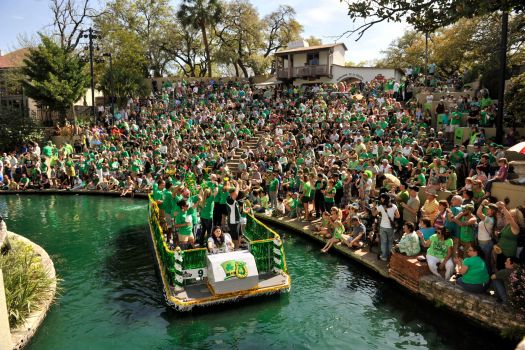 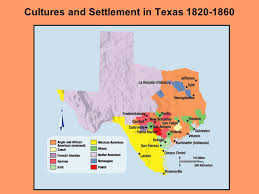 John Kennedy came to Houston with his wife, Mathilda, and children, John Jr. and Daniel, shortly after the city’s founding in 1836. Kennedy was a very successful area businessman who, in addition to his baking business, also owned a gristmill, a retail and wholesale grocery business, and a ferry on the San Jacinto River. During the Civil War, Kennedy produced hardtack for the Confederate Army and leased property to the Ordinance Office.

The Irish had been immigrating to Texas for over one hundred years by the time John Kennedy moved there. One of the first Irish-born immigrants to play a major role in Texas history was Hugh O’Connor, who was born in Dublin in 1734. He originally moved to Spain and eventually served as the Spanish governor of Texas from 1767-1770. Irish empresarios John McMullen and James McGloin founded the San Patricio colony south of San Antonio. Other Irish empresarios included James Power and James Hewetson who created the Refugio colony on the Gulf Coast. In 1850, there were 1,403 Irish living in Texas and by 1860 there were 3,480, according to the census. Today, this Irish heritage can be seen in Irish cultural festivals throughout the state, including the North Texas Irish Festival in Dallas, the Cowtown Goes Green festival in Fort Worth, the St. Patrick’s Day Dinner served in the Indian Lodge in Davis Mountains State Park, the St. Patrick’s Day Parade in San Antonio in which the San Antonio River is dyed green, and the St. Patrick’s Day celebration in Abilene and Clifton.