Located in Portland's downtown core is the University Club, designed by the well known Portland-based architecture firm, Whitehouse & Fouilhoux. Erected in 1913, this building served as an all-male social space for the city's elite. The building was added to the National Register of Historic Places in July 1979 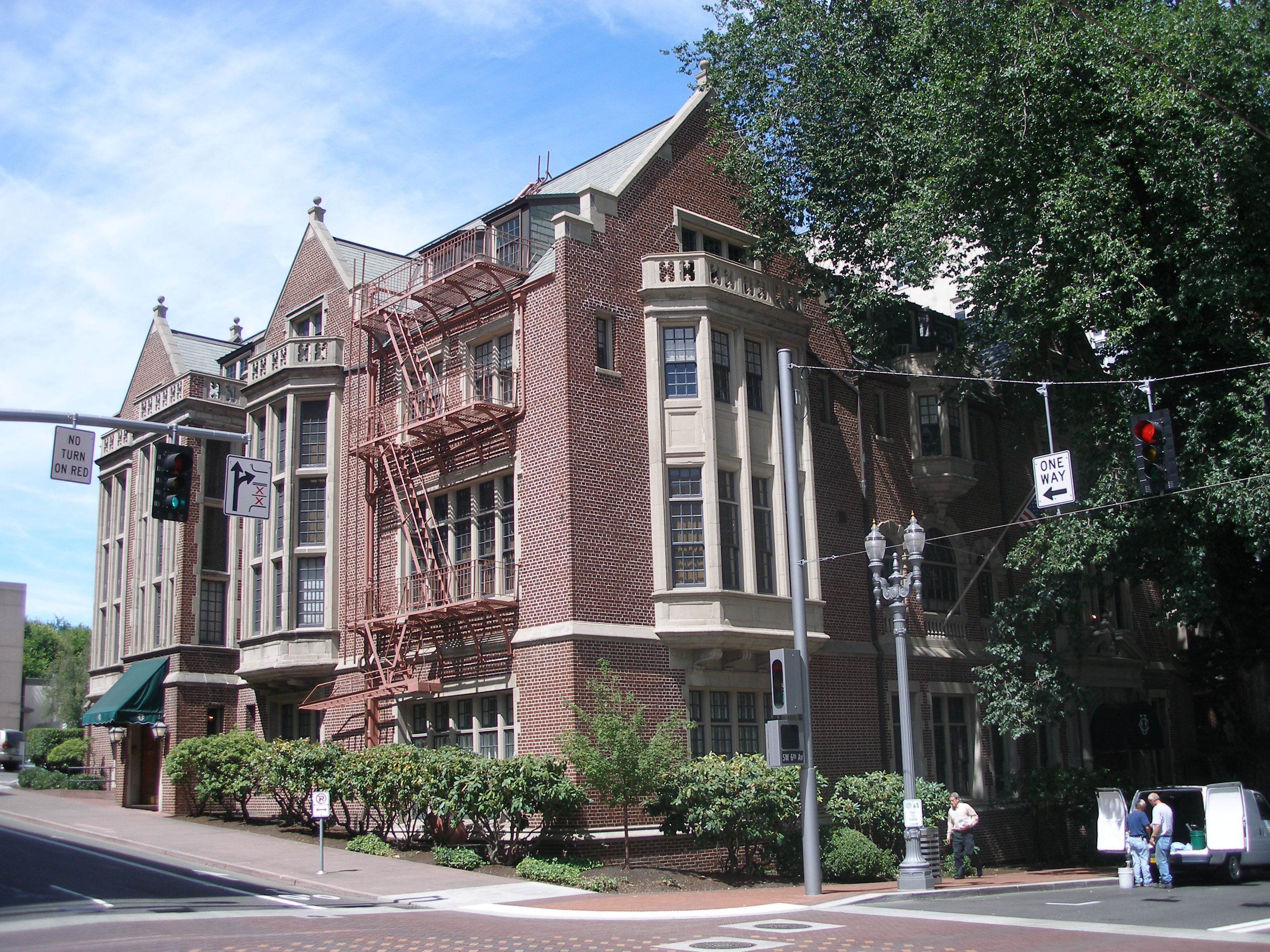 The University Club was officially founded in May 1898 as an elite male society, inspired by many such gentlemen’s clubs in vogue throughout the city and in London’s West End. However, unlike many similar clubs in the city women were allowed to become members almost as soon as the club opened. However, many chose not to join – partly due to the imbalance (or in some respects complete lack) of facilities catering to them. “Women” were restricted to the wives of male members, and they had to access their area of the building by a separate entrance. To this day many parts of the building remain “male-only”. After its founding, the club moved between temporary and a series of purpose-built venues for their events, until a growing number of members forced them to seek a larger space.

Two exceptional architects were commissioned to build the structure. Morris Homans Whitehouse was born in Portland in 1867, and studied architecture at MIT. After a series of apprenticeships he met the engineer J. Andre Fouilhoux. Born in Paris in 1879, Fouilhoux had studied at the Sorbonne and the Ecole Centrale des Arts et Manufacterers before immigrating to the United States in 1904. Together they founded an architectural firm that would go on to design many notable buildings in the city, including the Gearhart Hotel, the Federal Courthouse, and the Multnomah Stadium. They even assisted Trowbridge and Livingston in the designs for the Oregon State Capital in 1936.

Construction began in 1912 and was completed the following year. Whitehouse and Fouilhoux designed the University club in a Jacobean (also known as Jacobethan) Revival style. It features many characteristics inspired by 17th century English buildings, but fuses these with Renaissance influences. The structure is made of dark red masonry laid in an English bond, with internal steel supports holding up the gabled roof of asbestos shingles. The ground plan is square in form, and four stories high. It features handsome oriels and Palladian windows, and above the front entrance pediment can be spotted the club’s initials carved into the brickwork.

Entering from the north east, visitors can admire the “Muller Mosaic Floor” of ruddy ceramic tiles depicting heraldic insignia. The walls are covered in fir panels and finished with an eggshell plaster. On the ground floor was the lounging room, which contained a marvelous marble fireplace with dark stained-fir mantelpiece. This leads into the card and domino room, which features an intricately carved rosette at the center of the ceiling. The basement contains the boiler closet and wine storage, in addition to further spaces for socializing and recreation, including a billiard room and card room. On the first floor is a medievalesque bar for the male members, known as the “Tap Room”. It is fitted with a grand Baronial-style fireplace and a mock clerestory encircling the room.  The women’s area consisted of a reception hall, dining room, and lounge on the first floor. The dining room was particularly beautiful, hung with wallpaper showing scenes from life in Ancient Rome. The second floor has a large hall leading into lounges, the reading room – complete with its original opal glass and bronze incandescent lighting – and the writing room. The main dining room is also accessible from here, easily the most striking room in the building.   The space is two stories high, with a beautiful inlaid hardwood floor, central Elizabethan balcony, and ceiling supported by imposing timber beams.  The upper two stories were used as bedrooms during the club’s early days, and also contained a two-story squash court.

The University Club is in an excellent condition, having remained fully operational since its origins. Limited modifications have been made to the interior: the squash court was converted into the heating, ventilating, and air conditioning unit in the 1950s, and an additional bar was installed in the 1960s. It serves as a fine location from which to explore nearby attractions, including the Ambassador, Paramount Theatre, the Ladd Carriage House, Portland City Hall, and the Federal Courthouse – also designed by Whitehouse and Fouilhoux.