The Donald and Ruth McGraw House is one of the finest buildings designed by the acclaimed Portland architect, Jamieson K. Parker. Built in 1932, the plot also features an attractive landscape designed by Lord and Schryver, landscape architects from Salem. The building was added to the National Register of Historic Places in September 2001 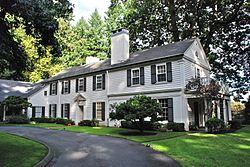 The residents of this property were Don McGraw and his wife Ruth Hayes, both born in Wisconsin in the 1880s. Don was an accomplished insurance broker in Portland. The McGraw family owned a nine acre area of land, which they divided up between their family and the Hayes, close relations. A house was built for each family.

The home is best known as being the work of Jamieson K. Parker, a Portland architect of remarkable skill and aesthetic taste, who commissioned to design and built the house upon the three and a half acre large plot. Parker designed approximately seventy five buildings during his career, of which this is the largest. Construction of the McGraw House started in 1932. The two-storied building was constructed in the Colonial Revival style, and features a characteristic beveled lap siding and double-hung windows with shutters. The exterior was painted white. Rising from the sloped composition shingle roof is a brick chimney, which served the fireplaces found in the master bedroom and drawing room inside. On the southern edge of the building is a one story porch topped by a refined Chinese Chippendale style roof railing. The eastern side of the house extends to a depth of three floors because of the slanted topography. Each of the main rooms in the building faces east, towards a magnificent view of Mt. Hood. The site is also well-known for its landscape design. It is nestled in the midst of woodland filled with local fir and pine trees and rhododendrons. Surrounding the house is a carefully designed garden, designed by two landscape architects from Salem, Lord and Schryver.

Inside, the home possesses an “L”-shaped floor plan, composed of the main residential wing with a one and a half storied garage built at a right angle from its north-western edge. Visitors entered through the gabled southwestern face of the building, through a recessed doorway flanked by pilasters and a pediment of the Corinthian order. This led into a central hall, from which the drawing room, library, dining room, and kitchen are all accessed. There are a number of remarkable architectural details found in the home, including the Federal Style fireplaces, built-in bookcases, wooden wall panels, ornamental wainscoting, and full bay and French style windows.

Don and Ruth resided in the home from 1932 to 1949, when Don passed away, and 1963, when Ruth followed. Their child, Donald H. McGraw, subsequently occupied the building with his family, making a number of modifications to the property that were led by architect Richard Marlitt. The most significant of these was the extension made to the east of the kitchen, which would be used as a socializing space for the family. Located near to the house are additional garages, which were added to the site in 1965. A gently sloping lawn to the east leads to a bath house and swimming pool, each constructed later in 1967 by Barbara Fealy. Today, the property remains in an excellent state of conservation. Although it is privately owned, visitors are able to admire the house’s exterior architectural features and the landscaped garden.