This building was constructed in 1911, and is one of the finest examples of Jacobethan Tudor Revival architecture in the state. It was designed by the renowned local architect David Chambers Lewis, who used it as his home. It was added to the National Register of Historic Places in March 2015.

Modern view of the home (http://pamplinmedia.com/) 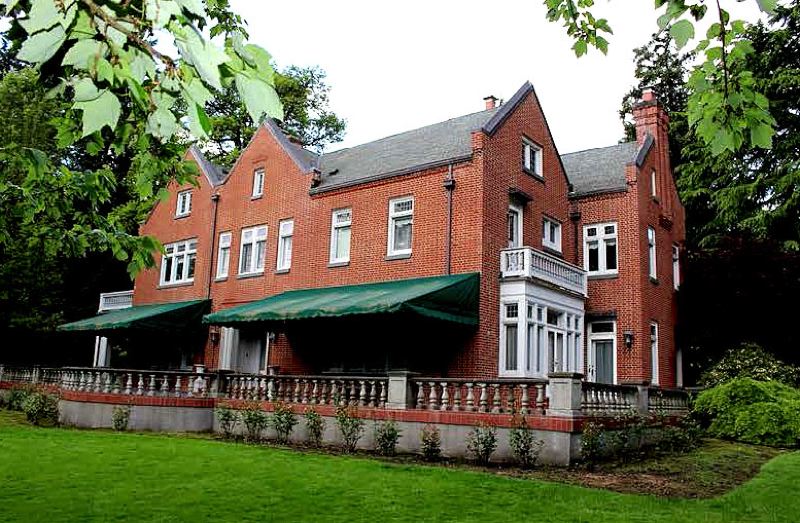 Modern view of the home (flashalertnewswire.net) 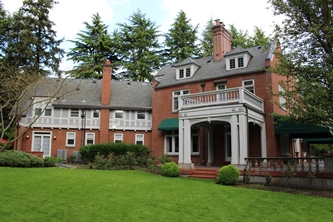 The Lewis C. Hunt and Gertrude McClintock House was a single family home on the west bank of the Willamette River that was designed and built by David Chambers Lewis. It was built as the home of Cicero Hunt Lewis Jr. The Lewis family was well known in Portland: Cicero’s grandfather was one of the first founding settlers of the city, Captain John Couch, and his father co-founded Allen & Lewis, the largest wholesale grocery retailers of the West Coast. Cicero was himself engaged in marketing activities in the city, as an officer of the Security Savings and Trust Company and a major investor in the Oregon Railway and Navigation Company of Henry Villard. He was beloved by the local community, being an active supporter of Portland’s Good Samaritan Hospital and the Trinity Episcopal Church.

Until 1881 Cicero resided in a house at Fourth and Everett streets, along with his wife, Gertrude, and eleven children. However, a larger home was desired, and in 1910 his brother, David Chambers Lewis, funded the designs of the present-day site. Construction finished the following year. The house is two-and-a-half stories high, set upon a solid concrete foundation and made of stucco, timber, and brickwork laid in a Flemish bond pattern. It was designed according to the Jacobean Tudor Revival architectural style – a combination of Tudor and Elizabethan elements that was very popular at the beginning of the twentieth century. It has a steeply parapet and clipped gabled roof of composite asphalt shingles, topped with multiple massive and multi-flued chimneys. It occupies an area of about eight thousand square feet, and possesses an asymmetrical floorplan with a secondary service wing set at an angle from the main structure’s orientation. The windows and doors were all made of timber, with zinc bars set into the wood sash window frames for panes of glass and topped with canvas awnings. A number of characteristic Tudor Revival embellishments inspired by 15th – 17th century England were incorporated into the building, such as the medieval arches decorated with shields and double-leaf wooden door leading into the library.

Inside, the home has a distinctly medieval atmosphere, with walls covered in ornamental plasterwork, paneled timber walls, staircases embellished with oak treads and top rails, and a magnificent stone fireplace. It contained six bedrooms, five and a half bathrooms, a library, drawing room, and dining room. Access from the recessed front door – which was decoratively bordered by a Tudor-style archway flanked by side windows – led to a central hall that crosses from the eastern side to the western side of the house, complete with a coat closet and reception room with a powder-closet. The service wing contained space for the servants of the house: a butler’s pantry leading into the kitchen, a breakfast room for the staff, and two bedrooms. There were also attics, and basements that contained a laundry room, fruit storage room, and wine cellar.

A full-width brick and stone terrace with a post-and-baluster railing encircles the northern and southern exteriors of the main house, and a smaller porch once existed around the servant’s quarters as well. Adjacent to the home is a garage, also built in 1911. The top floor of the two-story structure was used as an additional apartment. The exterior grounds of this home were one of many in the Portland area designed and laid out by the Olmsted Brothers – a landscape architecture company from Brookline, Massachusetts – between 1903 and 1928. A patio of flagstones quarried from Mt. Arthur encircles the entire plot.

Although the surrounding garden has been largely remodeled, the Lewis C. Hunt and Gertrude McClintock House is in an excellent state of preservation to this day, having only been remodeled once during the 1990s to modernize the kitchen and bathrooms. Even though it is now privately owned, visitors can view the exterior from all angles to admire Chambers’ Tudor Revival architecture.