Old Town Chinatown was the earliest urban center of Portland, the city’s first recognized historic district, and one of the few national historic landmarks in the city. Located on the west bank of the Williamette, this historic commercial neighborhood is features fine examples of High Victorian architecture, the city's first public park, and the iconic 19th century Skidmore Fountain. Over the 20th century the area developed into a bustling Chinatown, though a variety of other ethnic groups are also represented. It was added to the List of National Historic Landmarks in Oregon in May 1977. 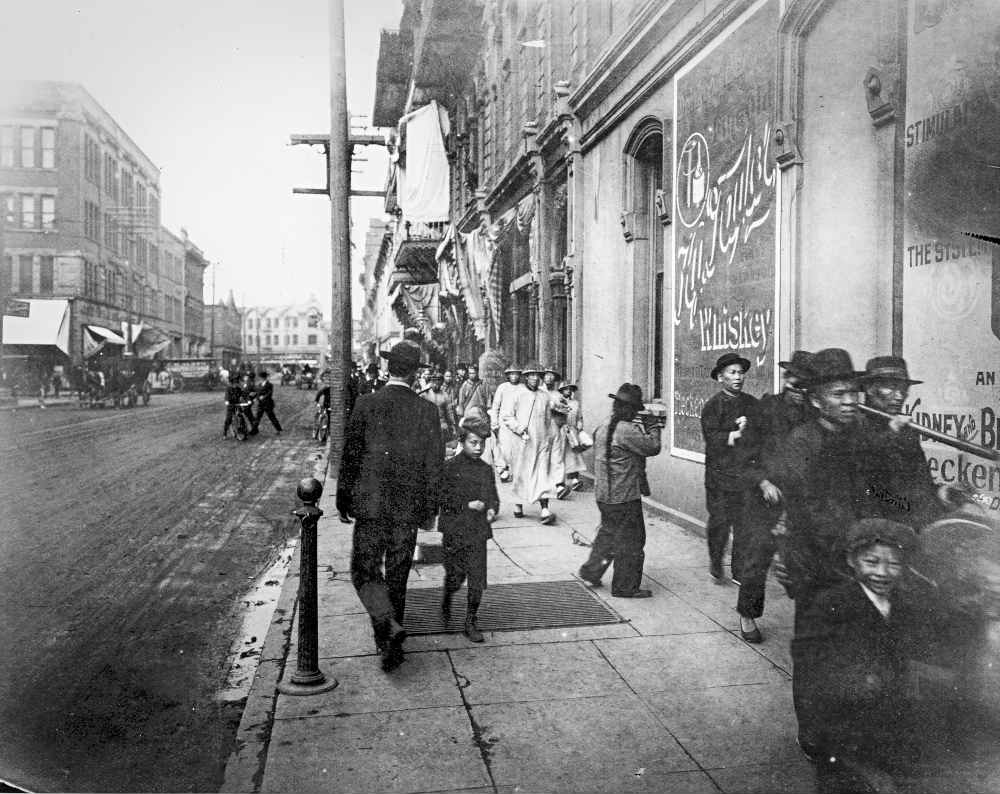 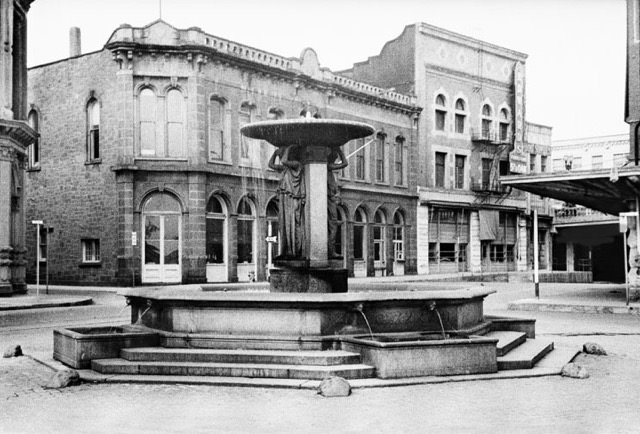 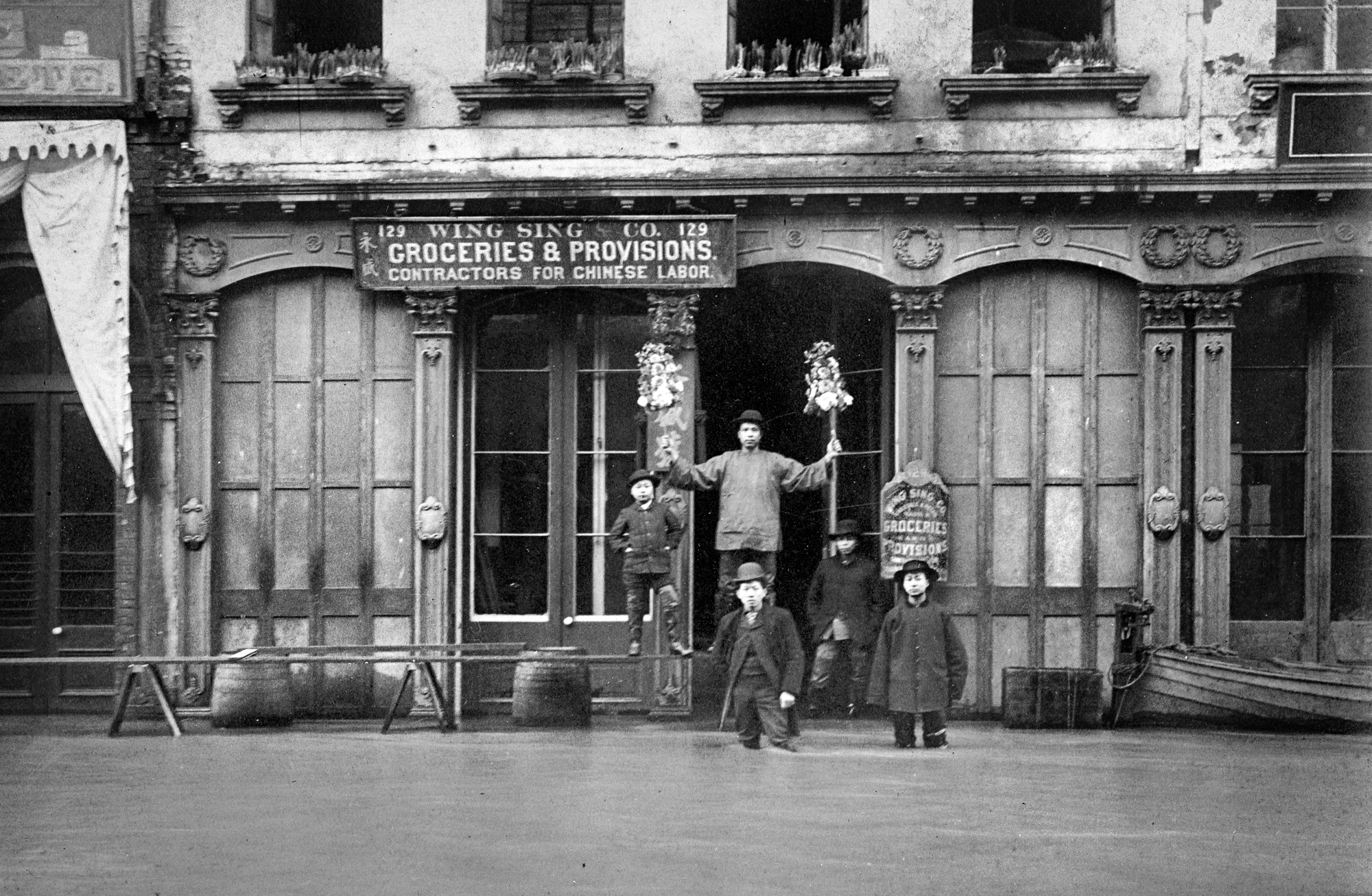 The entrance to Chinatown today (neighborhoodnotes.com) 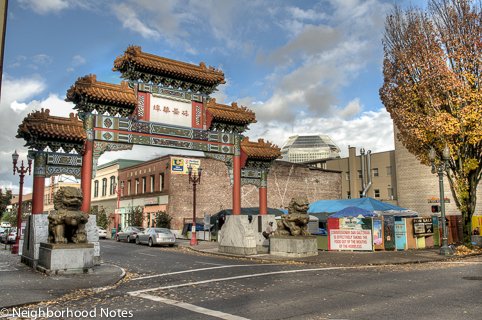 Previously known as Skidmore or Skid Road, this area of Portland’s Central City on the west bank of the Willamette River was an area that was of key importance to the growth of development of north-western USA. The grid-based road infrastructure was planned and laid out in 1845 by Thomas Brown. By the 1850s the resulting blocks were being filled by a variety of residential, industrial, and commercial sites, but it was not until the 1870s that construction boomed in the area. Huge numbers of immigrants came to the USA from China and Japan during the Gold Rush of the mid-19th century, and many thousands of these settled in Portland – in particular after regular shipping began between the city and San Francisco from 1851. Between the mid-19th century and end of the Second World War Portland was home not only to East Asians, but large communities from Ireland, Germany, Scandinavia, Greece, and the Philippines. Some Roma lived there, as did a great number of Sephardic and Russian Jews and African Americans.

The residents of Skidmore worked in trading houses, warehouses, and steamships at the wharf, or at the many offices of merchants and shipping companies along Front and First streets in Old Town. Accommodation was available for sailors and workers that arrived by steamship, who would be glad to make use of the many saloons, gambling dens, burlesque halls, and brothels available in Chinatown. Schools, religious institutions, societies, law firms, health services, stores, restaurants, and entertainment halls were all founded by each ethnic community, often in architectural styles reminiscent of their homeland. This resulted in a startling variety of building types, including Victorian Italianate, Richardsonian Romanesque, Commercial, and the Modern Gothic style of Warren H. Williams. There were many publishing companies based in the district, who wrote in a great variety of languages.

The Chinese community was the largest, and Old Town eventually grew into one of the largest Chinatowns in the country. These and other ethnic communities stayed together in the face of ever more oppressive and racial conditions – especially during the period in which the Chinese Exclusion Act of 1882 was active (1882 – 1943). The Old Town once contained a remarkable Japantown, in addition to its Chinatown. This area of the neighbourhood suddenly disappeared in early 1942, believed to have been caused by the widespread – yet to this day largely unreported – internment of Japanese residents of Portland. However, the Japanese community has regrown from the early 21st century, and there is an increasing Japanese cultural presence in the commercial and cultural organizations in the district. Visitors interested in the Japanese heritage of Old Town can visit the Japanese-American National Plaza and the Nikkei Legacy Center.

There are a number of particularly noteworthy heritage layers found in the Old Town and Chinatown. In 1894 the Willamette River rose by thirty three feet following torrential rainfall, flooding many areas of Portland. During this time, staff and customers of Old Town’s services had to row along the streets to conduct their business. The Chinatown Gate and “Portland Oregon Old Town” sign, depicting a leaping stag in bright neon, greet visitors to the district. The Lan Su Chinese Garden occupies an entire block, built in 2000 according to the aesthetic tastes of Ming Dynasty scholar officials from the famed city of Suzhou. The nearby Union Station is a handsomely designed structure with a prominent fifty foot high clock tower. Of particular interest for their rarity and beauty are the ornate cast-iron Victorian Italianate buildings erected in the mid-nineteenth century – known amongst locals as Portland’s “Commercial Palaces” – of which the example on Blagen Block serves as a fine example. Finally, the iconic Skidmore Fountain is located in the district.

Today, although only ten blocks of the historic district remain, they preserve most of their early charm with well conserved architecture and a buzzing cosmopolitan atmosphere. Old Town continues to serve as the commercial hub of the historic waterfront area in Portland. A great number of attractions are offered to the visitor, including drinks at the subterranean Shanghai Tunnels of the 1850s or the Dan and Louis Oyster Bar of the 1900s, Voodoo’s (one of the world’s most renowned donut vendors), and a changing selection of pop-up stores selling locally made products.