Located in Angels Gate Park overlooking the city of San Pedro, the Korean Bell of Friendship is a large, bronze bell that sits on the Pacific Ocean. Thirty craftsmen from Korea built the bell in ten months. It consists of four carvings that represent peace, freedom, prosperity, and independence. On October 3, 1976, this historical monument was given as a gift to the United States by the Republic of Korea to celebrate peace between the United States and Korea, and honor the veterans of the Korean War.

Korean Bell of Friendship and Pavilion 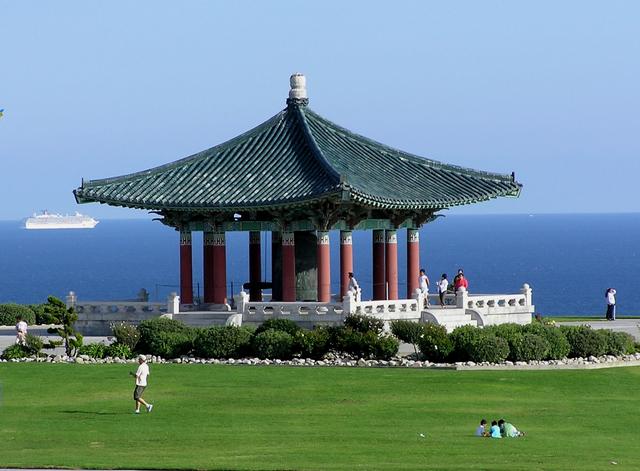 The bell, which is a replica of one cast in 771 A.D. in Korea called the Bronze Bell of King Songdon, is 12 feet high and 7.5 feet in diameter and weighs 17 tons. It consists of copper, tin as well as gold, nickel and lead for tone purposes. The bell was cast in Korea and shipped to San Pedro. The twelve columnns represent the twelve signs of the oriental zodiac and at the base of each are animals protecting the structure.