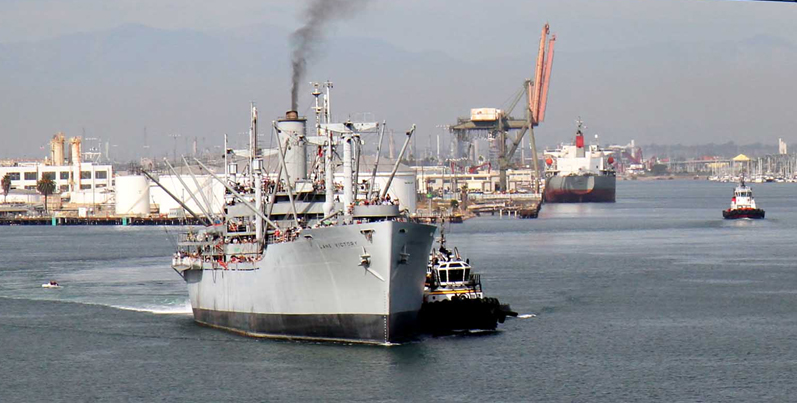 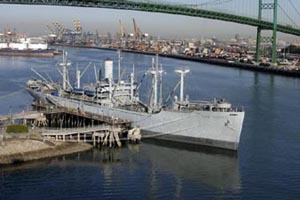 Cannon and masts of the SS Lane Victory. 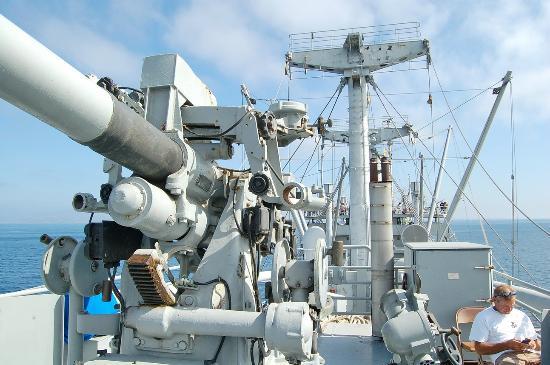 Gun aboard the SS Lane Victory. 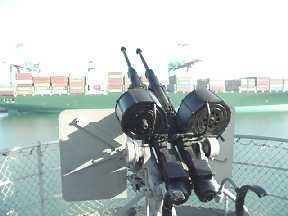 Setting sail as a merchant ship in 1945, the SS Lane Victory has survived three wars including; World War II, the Korean War, and the Vietnam War. The ship was designated a cargo "Victory" ship by the Maritime Commission. The SS Lane Victory has 5 cargo holds and can sail at speeds up to 17 knots. Its radio call sign is KECW. The ship is 455 feet long, 62 feet beam, 26 feet draft, and weighs 10,750 tons.1,2

Over the course of her history, the SS Lane Victory spent most of her days carrying military cargo for the Merchant Marines in three wars and commercial cargo to ports all over the world. During World War II the ship carried war supplies in the Pacific and a trip to Guam to deliver food supplies. Miraculously the ship survived sailing during a 14 day typhoon. During the Korean War the SS Lane Victory rescued thousands of refugees from Wonson and 1300 US troops from Hungnam. During the Vietnam War her mission was to provide ammunition and supplies to US troops located in the war zone. Her war career ended in 1970.1,2

"If it weren't for Joe Vernick, John Smith, and a feisty group of merchant marine veterans, The S.S. Lane Victory might have continued to silently sit and decay until finally being scrapped like her sisters. On October 18, 1988 President Ronald Reagan signed H.R. 2032 into law conveying the S.S. Lane Victory to the United States Merchant Marine Veterans of World War II. On June 7, 1989, the ship was officially transferred to the organization, and she was towed into Los Angeles harbor on June 12."1

After extensive restoration including; re-rigging of the cargo booms, restoration of the water and electrical systems, and other requirements by the Coast Guard, the SS Lane Victory has been fully restored to her original glory and currently acts as a museum. The museum is designed to commemorate the achievements and sacrifices made by the Merchant Marine sailors. The SS Lane Victory can be seen in many films and television shows including; Titanic, Pearl Harbor, The Thin Red Line, Baywatch, Alias, and many more. Visitors are welcome to visit the ship daily from 9 am to 4 pm. Parking is free and admission to the museum is $5 for adults and $2 for children.1,2