Since his permanent residence was located in downtown Los Angeles (about 16 miles from RLC, or a half-day’s journey by wagon), John Temple employed a foreman – in Spanish, a mayordomo – to manage day-to-day operations at his cattle ranch. Charged with keeping the books and supervising the workers, the foreman was a literate man who could do basic math and accounting. The foreman was the only worker to have his own private bedroom, which doubled as an office. Furnishings include a wooden bed frame with ropes to support the straw mattress, trunks for clothing and other personal belongings, a wooden table, and several chairs. The tools of the foreman's trade are also visible, including a California-style saddle, several branding irons, and the ledger in which the Rancho’s business records were kept. Since there was no plumbing or electricity when the adobe was built, the foreman’s room also has a chamber pot under the bed, a wash bowl and basin in the window, and candle chandelier. 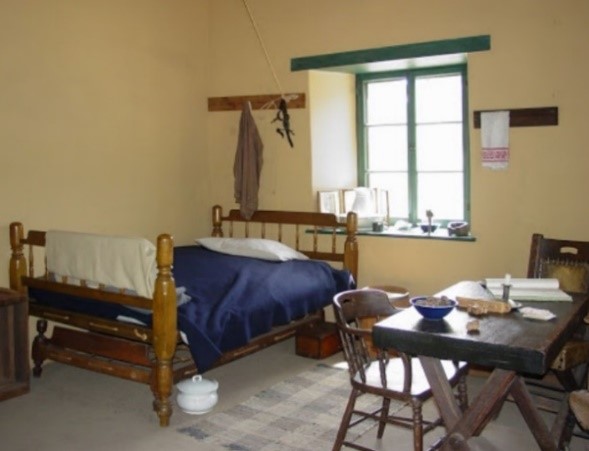 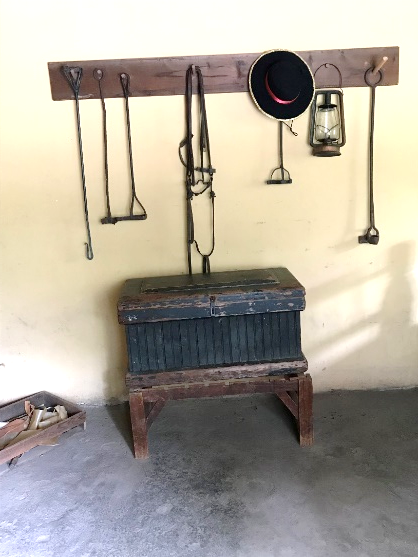 Sr. Rocco – an immigrant from Spain – was listed as the manager of Rancho Los Cerritos on the 1850 Census probably lived in the room nearest the entry gates – a room that would have served as both his bedroom and office. At Rancho Los Cerritos, Temple’s workers raised about 15,000 cattle, producing valuable cowhides for export (leather boots, saddles) and tallow (cow fat) rendered locally for use as candles and soap. Temple ventured into the Hide and Tallow trade in the mid-1840s when a single cowhide was worth about $2 and the fat from one cow about the same. As thousands and thousands of gold miners arrived, beef became a marketable commodity. By 1853, an estimated 300,000 people had emigrated to California from all around the world, spurring the first cattle drives in American history – from ranchos like John Temple’s in Southern California to the gold fields in the high Sierras and to large towns like Sacramento and Stockton. The value of each cow (if slaughtered near a prosperous mining town) quickly jumped to about $80/head. The market soon settled down to about $20/head, but what a difference a decade made for Temple’s fortunes!