The people who lived at Ranch Los Cerritos had to be self-sufficient, since their closest neighbors (Rancho Dominguez, Rancho Los Alamitos) were 5-8 miles away. The Los Angeles pueblo was 16 miles away, or several hours by carriage. Thus, the work wing originally had five storerooms – with barred windows and locked doors – to store what they needed, like extra furniture and food staples. The two storerooms are now connected by an inside hallway, and each has a closet and a bathroom. These features were added in the 1930s renovation, when the rooms served as guest suites. The covered walkways, also added during the renovation, certainly made getting to the main house on a rainy day much less unpleasant for 1930s guests. 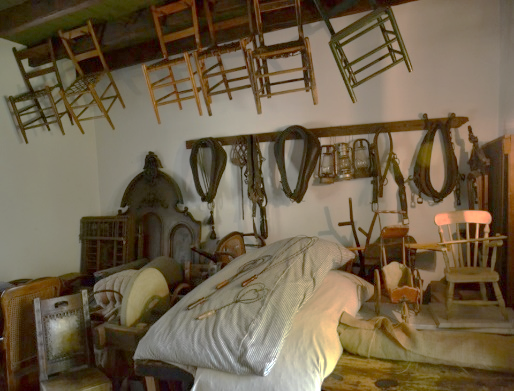 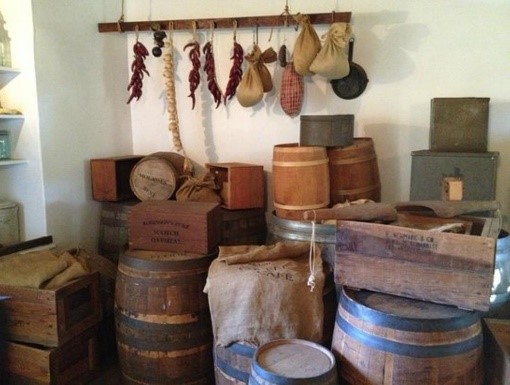 The Furniture Storeroom has extra chairs and straw mattresses for visiting relatives who might stay for a few weeks at a time, as well as trunks for travelling and extra dressers and bed frames as needed. This room also displays horse tack and sheep ranching items, since the ranch’s outbuildings have been lost to time.

The Food Storeroom has dry goods in large containers, including beans, coffee, tea, chocolate, and molasses. Such items were commonly purchased in bulk to minimize trips to Harris Newmark’s mercantile in Los Angeles (half a day's journey). Perishable fruit, like apples, oranges, figs, and grapes, were harvested from the orchard and could be dried or canned for future use. Other perishables are stored here too, including meat, which could be salted or smoked for longer shelf-life, eggs that came from the ranch chickens, and cheese and cream that were provided by Marcellus Bixby’s dairy cows. Marcellus was the older brother of Jotham and Lewellyn Bixby; he lived about a mile from the RLC adobe – and he apparently had little interest in sheep ranching, preferring dairying instead.