Commonly referred to as the Getty, the J. Paul Getty Museum is an art museum in Los Angeles housed on two campuses: the Getty Center and Getty Villa. The Getty Center is in the Brentwood neighborhood and is the primary location of the Museum. The museum's collection features Western art from the Middle Ages to the present. It is estimated that 1.3 million people visit the museum per year, making it one of the most visited Museums in the United States. The Museum's second location, the Getty Villa, is in the Pacific Palisades neighborhood and displays art from Ancient Greece, Rome, and Etruria. 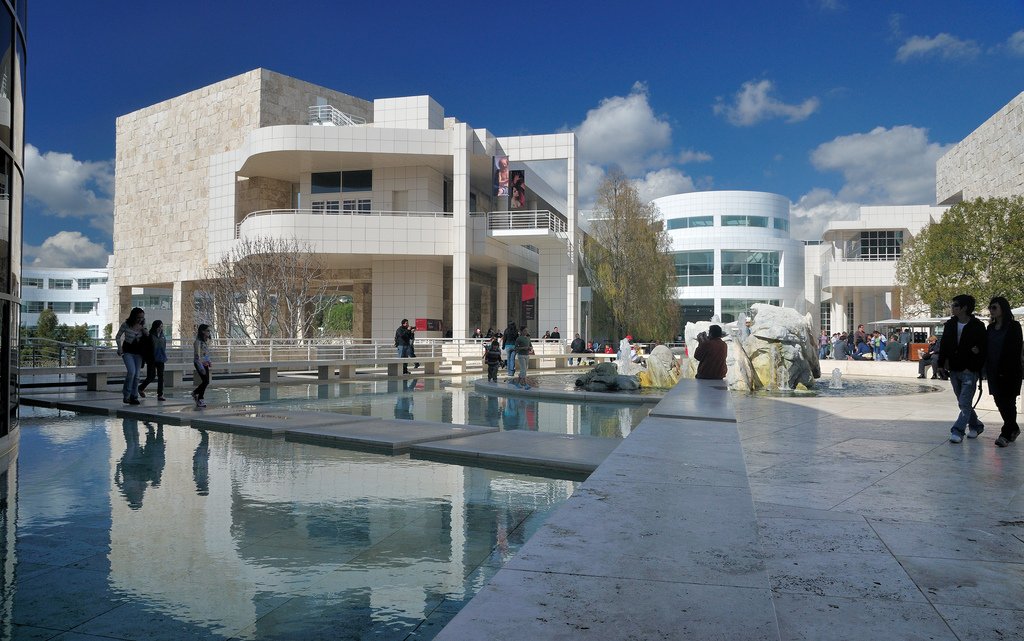 In 1974 J. Paul Getty opened his second museum, in a re-creation of the Villa of the Papyri at Herculaneum, on his property in Pacific Palisades, California. In 1982, the museum became the richest in the world when it inherited $1.2 billion dollars. In 1983, after an economic downturn in what when then West Germany, the Getty Museum acquired I44 illuminated medieval manuscripts from the financially struggling Ludwig Collection in Aachen; John Russell, writing in the New York Times, said of the collection. "One of the finest holdings of its kind ever assembled, it is quite the most important that was in private hands." In 1977, the Museum moved to its current location in Brentwood; the Pacific Palisades Museum was renamed the "Getty Villa" and closed for renovation until 2006.

The Getty is involved in a controversy regarding proper title to some of the artwork in its collection. The Museum's previous curator of antiquities, Marion True, was indicted in Italy in 2005 on criminal charges relating to trafficking in stolen antiquities. Similar charges have been addressed by the Greek authorities. The primary evidence in the case came from the 1995 raid of a Geneva, Switzerland, warehouse which had contained a fortune in stolen artifacts. Italian art dealer Giacomo Medici was eventually arrested in 1977, and his operation was thought to be one of the largest and most sophisticated antiquities networks in the world, responsible for illegally digging up and spiriting away thousands of top-drawer pieces and passing them onto the most elite end which announced her early retirement. Italy allowed the statue of limitations of the charges filed against her to expire in October 2010.

In a letter to the J. Paul Getty Trust on December 18, 2006, True stated that she was being made to carry the burden for practices which were known, approved and condoned by the Getty's Board of directors. True is currently under investigation by Greek authorities over the acquisition of a 2,500-year-old funerary wreath. The wreath and the 6th century BC statue of a woman have been returned to Greece and are now exhibited at the Archaeological Museum of Thessaloniki.

On November 20, 2006, the director of the museum, Michael Brand, announced that twenty-six disputed pieces were to be returned to Italy, but not the Victorious Youth, which is still claimed by the Italian authorities. In 2007 the Los Angeles J. Paul Getty Museum was forced to return 40 artifacts, including a 5th century BC statue of the goddess Aphrodite, which was looted from Morgantina, an ancient Greek settlement in Sicily. The Getty Museum resisted the requests of the Italian government for nearly two decades, only to admit later that there might be problems attached to the acquisition. In 2006 Italian senior cultural official Giuseppe Proietti said: "The negotiations haven't made a single step forward. Only after he suggested the Italian government to take cultural sanctions against the Getty, suspending all cultural cooperation, did the J. Paul Getty Museum return the antiquities."

In another unrelated case in 1999 the Getty Museum had to hand over three antiquities to Italy after determining they were stolen. The objects included a Greek red-figure kylix from the 5th century BC, signed by the painter Onesimos and the potter Euphronios, looted from the Etruscan site of Cerveteri a torso of the God Mithra from the 2nd century AD and the head of a youth by the Greek sculptor Polykleitos. A summary Catalogue of European Decorative Arts in the J. Paul Getty Museum was published in 2001. Indeed, some discrete works are provided with annotations, a picture frame from the late 18th century with modern mirror glass, which was bought at Sotheby's after the death of George Baillie-Hamilton, 12th Earl of Haddington, is equipped with the comment possibly Paul Georges. On September 26, 2007, Sarcona Center signed a contract with the culture minister, Francesco Rutelli, to return arts stolen from Italy including the fresco paintings from Pompeii, marble and bronze and sculptures and Greek vases.