Originally called the Markwell Building, when it was built in 1919, it was renamed the Jergins Trust Building. The building was renamed because it was purchased by the Jergins Oil Company in 1926 (SDSU Library and Digital Collections). The architects of this building and the State Theatre inside it were Harvey H. Lochridge and Kirkland Cutter. Originally four stories, three stories and a penthouse were added and designed by Lochridge. The building reached ten stories tall and stood until 1988, when it was demolished in the interest of making the land more valuable to "potential buyers and developers" despite great protest from the city. 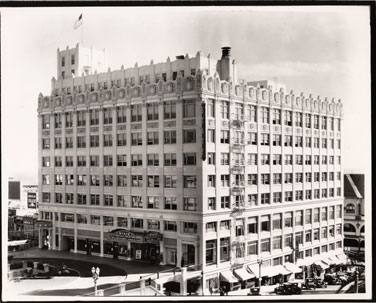 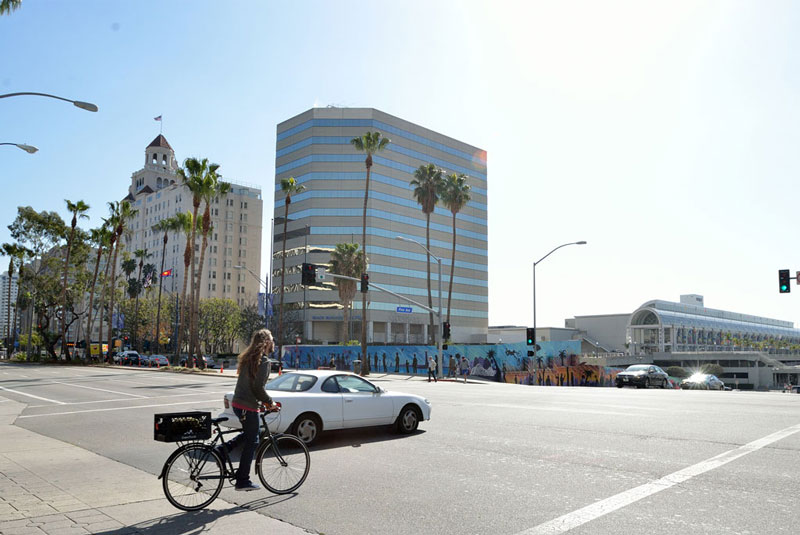 This building was conceptualized and built by its original namesake, Sylvester Markwell, who, according to Press Telegram, "incorporated a Vaudeville Theater and some 60 shops in its arcade area1." After the Jergins Oil Company purchased it (circa 1925 or 1926), A.T. Jergins decided to add six total floors to the building. Eventually, it reached ten floors and housed the Municipal Court Building, before a separate entity was constructed in 19602.

One of the most unique facets of this site is what lay underneath, which is a tunnel passageway. Never underestimate the power of city council members to look out for their constituents' best interest. Alexander Beck, a member of the local city council, became increasingly concerned by the number of fatalities resulting from car accidents. Beach-goers and people traveling to other locations were involved in collisions, and as many as 30-40 pedestrians succumbed to their injuries every month in Los Angeles County3. To mediate this problem, Beck conceptualized a tunnel that connected from the arcade of the Jergins Trust Building to Long Beach, the length of Ocean Boulevard. When the "subway" as it was called, was constructed in 1927, the cost of construction was $70,000. In addition, a person could walk the length of the tunnel and find themselves at the Pike amusement park, which contained a large wooden roller coaster. The tunnel itself was a treat, according to a 1992 article from The Los Angeles Times, "[d]uring its glory years, between 1934 and 1939, the tunnel housed booths that sold 50-cent bottles of orange-blossom perfume, handwoven cloths, old-fashioned candy, stuffed animals and fresh flowers. The tunnel connected the beach with a thriving international arts and crafts arcade beneath the Jergins Trust Building" (Schill). According to the Long Beach Heritage Newsletter, these vendors and stores were taken out of the tunnel in 19404.  The entire complex, building, and tunnel, reflect the sense of adventure the roaring 20's lent to our culture with the invention of the automobile and fleeting affluence.

Throughout the 1980s, a tug of war between the Los Angeles Cultural Heritage Committee and land developers ensued. The Cultural Heritage Committee wanted to preserve the building, while the current owners, Perini Land and Development Co and Glenoborough Co, wanted to demolish the building in order to construct a "181 room luxury hotel," according to a 1985 Los Angeles Times article. Interestingly, in 1979, the building was declared a city landmark and it could've been placed on the National Register of Historic Places, but the owners refused and it was eventually torn down in 1988. The Jergins Building was witness to several cultural and artistic events of the 20th century, including the performance of Fred Astaire and Ginger Rogers in the building's vaudeville theatre.