Montclair Park consists of 3.1 acres, including the 1-acre grounds of the Molkery (now known as the Montclair Civic Center), built in 1888 for Baron Walter Von Richthofen as a health spa for sufferers of tuberculosis. The park is listed on the National Register of Historic Places, and the Civic Center, now a thriving community center, is designated a Denver Landmark [1; 2; 4]. 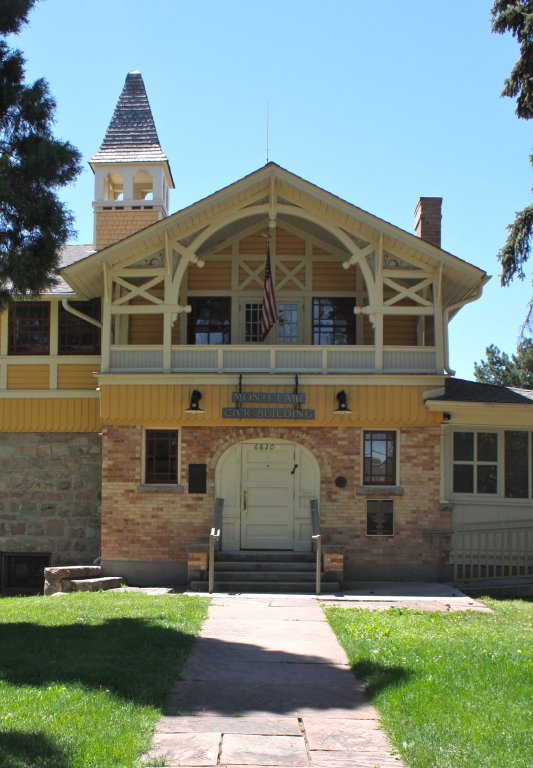 Montclair Civic Building, also known as "The Molkery" (image from the City of Denver) 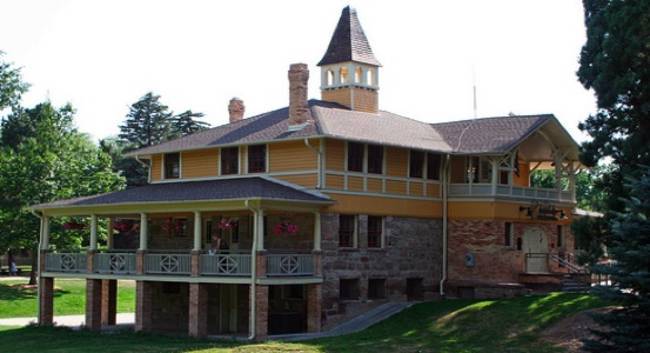 Interior of The Molkery (image from the City of Denver)

The Molkery historic marker (image from the University of Colorado) 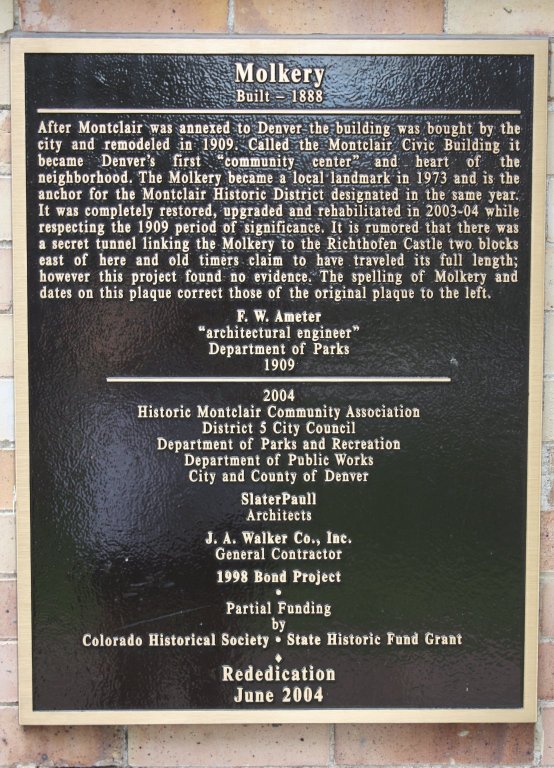 Montclair Park consists of 3.1 acres, including the 1-acre grounds of the Molkery (now known as the Montclair Civic Center), built in 1888 for Baron Walter Von Richthofen as a health spa for sufferers of tuberculosis. The park is listed on the National Register of Historic Places, and the Civic Center, now a thriving community center, is designated a Denver Landmark [1; 2; 4].

The histories of Montclair Park and the Molkery are tightly interwoven with the history of the Montclair neighborhood itself. All three began with the vision of Baron Walter Von Richthofen, who moved to Colorado from Germany in 1877 (Richthofen was, incidentally, uncle to the Red Baron of World War I). In addition to writing novels, the Baron established the Downtown Denver Real Estate Company, helped found the Denver Chamber of Commerce, and, along with Matthias P. Cochrane, established the Montclair Town and Improvement Company in 1885 [3]. Montclair was promoted for its healthy climate, outside the smog of the city, but when settlers failed to build in the area, the Baron built a castle for himself at 12th and Olive Streets (urban legend has it that a tunnel connected the Richthofen Castle with the Molkery, but no evidence supports this) [3; 4]. Montclair Ditch was constructed in order to irrigate plantings in the neighborhood and in Montclair Park (established by Richthofen in 1887), and the Baron persuaded the Denver Tramway Company to add streetcar lines connecting downtown Denver and Montclair [1; 3]. To add prestige, building codes required that only brick or stone homes of two or more stories on double-sized lots could be constructed in the neighborhood [3].

Richthofen further expanded his interests when he opened a new restaurant, hotel, and health sanitarium on September 15, 1888. This was the Molkery (literally "milk house"), where the Baron promoted the "Swiss milk cure," where tuberculosis patients drank warm, unpasteurized milk and inhale therapeutic fumes through floor grates in the sun porch (the grates led down to the stables) [2]. The three-story building is in the style of a Swiss chalet with a French Colonial verandah [1]. While the Baron's business failed, his neighborhood thrived until the Silver Crash of 1893, with the additions of the Colorado Women's College and Fairmount Cemetery in 1890,as well as the National Jewish Hospital and Agnes Memorial Sanatorium (which took the Molkery's place in treating tubercular patients) [2; 3]. In 1902, the Molkery became an asylum, but when Denver annexed the neighborhood shortly after the turn of the century, the City took over the building and remodeled it in 1909 [1; 4]. The Molkery became Denver's first community center in 1910, and the surrounding block park received playground equipment for the first time [1].

In 2003-2004, the Molkery was restored, with changes including the reconstruction of a cupola, the veranda's grand staircase, and three chimneys, replacement of fire-damaged framing, and stabilization of the walls and stonework [2; 4]. For the restoration, Denver's Parks and Recreation department received the Stephen H. Hart Award and Community Preservation Award from the Colorado Historical Society and Historic Colorado, Inc., respectively. Today, the Montclair Civic Center hosts several service groups, and is available for parties and other events [2]. Modern-day Montclair Park features meadow and forest areas, tennis courts, and playground equipment and picnic facilities[1].

After Montclair was annexed to Denver the building was bought by the city and remodeled in 1909. Called the Montclair Civic Building it became Denver's first "community center" and heart of the neighborhood. The Molkery became a local landmark in 1973 and is the anchor for the Montclair Historic District designated in the same year. It was completely restored, upgraded and rehabilitated in 2003-04 while respecting the 1909 period of significance. It is rumored that there was a secret tunnel linking the Molkery to the Richthofen Castle two blocks east of here and old timers claim to have traveled the full length; however this project found no evidence. The spelling of Molkery and dates on this plaque correct those of the original plaque to the left. / F. W. Ameter / "architectural engineer" / Department of Parks / 1909 / 2004 / Historic Montclair Community Association / District 5 City Council / Department of Parks and Recreation / Department of Public Works / City and County of Denver / SlaterPaull / Architects / J. A. Walker Co., Inc. / General Contractor / 1998 Bond Project / Partial Funding / by / Colorado Historical Society * State Historic Fund Grant / Rededication / June 2004 [4]