The Beach Boys Historic Landmark stands on the former location of Brian, Dennis, and Carl Wilson's' childhood home in Hawthorne. The home was demolished in the mid-1980s in order to clear space for the construction of the I-105 Freeway. The image face of the landmark was inspired by the album cover of Surfer Girl. Six, gold 45 records are embedded in the base of the landmark, each with the name of one of the Beach Boys. Brian, Dennis, and Carl Wilson are on the left side, and Mike Love, David Marks and Al Jardine are on the right side. The monument was built through the efforts of local resident Harry Jarnagan, with financial assistance from fans and family members. 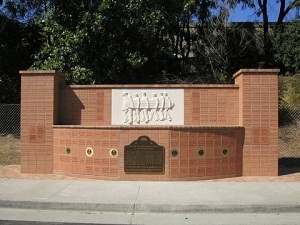 The monument includes a small plaque with the following inscription: "It was here that the childhood home of Brian, Dennis, and Carl Wilson developed their unique musical skills. During Labor Day weekend 1961, they, their cousin Mike Love, and a friend Al Jardine, gathered here to record a tape of their breakthrough song “Surfin’.” This marked the birth of the rock group known worldwide as the Beach Boys, and the beginning of a historic musical legacy. The music of the Beach Boys broadcast to the world an image of California as a place of sun, surf, and romance."