The Hollywood Sign was built in 1923 as a promotional campaign for a new suburban housing development called "Hollywoodland." In the decades that followed, it became a global symbol of entertainment industry and the city of Los Angeles. Perhaps ironically, real estate was the most profitable sector of the Los Angeles economy and the area's connection with the film industry has only helped that sector. Although intended to promote a housing development, the sign has a very different meaning to many as a symbol of Los Angeles as a place where anything is possible. 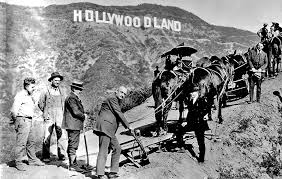 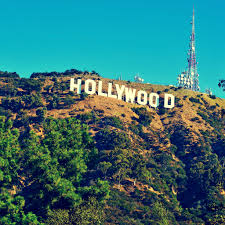 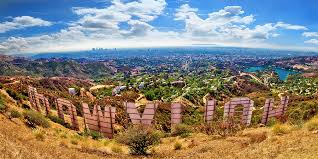 Before the phenomenon of the Hollywood entertainment industry, the site at Mt. Lee that now looks over Rodeo Drive and the Boulevard known the world around resembled any other Western frontier landscapes, with cowboys, prospectors, bandits, and mostly undeveloped land. Any real estate north of Sunset Boulevard was considered useless for anything but grazing. Easterners were drawn to Southern California by the sunny skies and mild weather. It wasn’t long before the “useless” land started sprouting subdivisions and by the end of the 19th century, Hollywood was transforming itself into a real town. Its name came about in 1887 when Daeida Wilcox heard a young women reference her Florida summer home, “Hollywood.”  The name seemed so fitting, she suggested it to her husband and that was the birth of Hollywood.

After a 10 year dormant period, Chicago film makers were forced to migrate Westward due to bad weather. The film industry began to expand in the area. Nestor Film Company, the first real studio, soon followed. The company cranked out three pictures of different genres for a total of $1,200. By 1912, word began to spread of this ideal shooting climate and landscape in Hollywood. Fifteen independent studios were very soon shooting around town, and barns were soon turned into sound stages. The once silent Western frontier was full of the yells of directors and actresses demanding makeup. By 1915, America was officially film crazed, and Hollywood was evolving into the glitzy, sometimes surreal landscape many associate with this part of California. During the roaring 20’s, a whimsical skyline of movie set-inspired hotels and apartments arose along the big boulevards. Stars began to buy prestigious real estate. This aristocratic society became the extravagant Hollywood glitterati where excess was the entry fee to fame.

Hollywood was no longer “just a city.” It was an industry, a lifestyle, and an aspiration. In 1923, it was officially crowned when the “Hollywoodland” sign was built. Los Angeles Times publisher Harry Chandler was the grand architect of the Sign. His intention was to build a glamorous sign for his upscale Hollywoodland real estate development. The Sign soon took the role of giant marquee for a city that was always announcing its own gala premiere. Massive in size, each of the original 13 letters were 300 feet wide and approximately 43 feet tall. They were constructed of 3x9’ metal squares rigged together by an intricate frame of scaffolding pipes, wires, and telephone poles. The materials were to be dragged up the steep, intimidating Mt. Lee dirt roads. When it was completed, the Sign twinkled and blinked first “Holly” then “wood” and finally “land.” Originally, it was only supposed to last a year, but the Sign has been around for more than eight decades and still sparkles.

Just as the entertainment industry had become stable and successful, tragedy hit in 1941 with the Pearl Harbor Attack. Hollywood became a full time war industry. Studio trucks transported troops instead of movie sets. Stars began to enlist and patriotic fare dominated the silver screens.  The war brought people together. Hollywood began to pull together to feed, shelter, and entertain the soldiers. The Hollywoodland real estate development went bust-a repercussion of the Depression, in the early 40’s. The Sign hadn’t been maintained in years and quietly became property of the city in 1944. The Sign had made an important transition from billboard to de facto civic landmark. The war slowed the march of the Hollywood entertainment industry, and the aging icon showed signs of neglect. The Hollywood Chamber of Commerce finally came to the rescue of the sickly Sign, removing the letters that spelled “Land” and repairing the rest, including the recently toppled “H.” The Sign was re-introduced as a leaner, cleaner sign in its now iconic form. In 1973, the Los Angeles Cultural Heritage Board gave the Sign official landmark status. However, with the growth of the city, the sign had deteriorated somewhat.

The Hollywood Chamber of Commerce (HCC) determined that the Sign needed yet another complete renovation. Though restoration was expensive, the biggest names in film came together raising enough money to give re-birth to a poised and polished new Sign. The revitalization was a major turning point for the success of Hollywood. With the new Sign, Hollywood was moving forward and continues to move forward today. As Hollywood blossomed, so did the Sign. Government officials in Los Angles along with the HCC and the Hollywood Sign Trust came to together to make permanent preservation acts, including 24/7 monitoring that would ensue yearly. Featured alongside the Eiffel Tower, Times Square, and the Great Pyramids, the Sign now resides among the world’s most revered landmarks. In 1991, a homeless man in the movie “Pretty Woman” announced “Welcome to Hollywood.  What’s your dream?”  The town where dreams come true has a watchful overseer that’s even more famous than some of its stars—The Hollywood Sign.

The Hollywood Sign, the worldwide symbol of entertainment industry, was originally created as an outdoor campaign for a suburban housing development called “Hollywoodland.” Despite the high profile of the film and TV business, real estate has always been Hollywood’s chief economic determinant. The evolution of the sign has altered its appearance and purpose, but in the end the message remains: “this is a place where magic is possible, where dreams can come true.” The big lifestyle and beautiful homes where once the iconic signs push factor; however, today, the Sign has more subtle promise of the fantastical lifestyle that can only be conjured by the word “Hollywood.”