Opened in 2005, the Arab American National Museum is the first museum in the country dedicated to the history and culture of Arab Americans. The museum is located in Dearborn, home to the largest population of Arab outside of the Middle East. Arab Americans in the United States hail from 22 different countries, representing a variety of cultures and religions. The museum hopes to educate, dispel misconceptions, and highlight the many contributions made by Arab Americans. 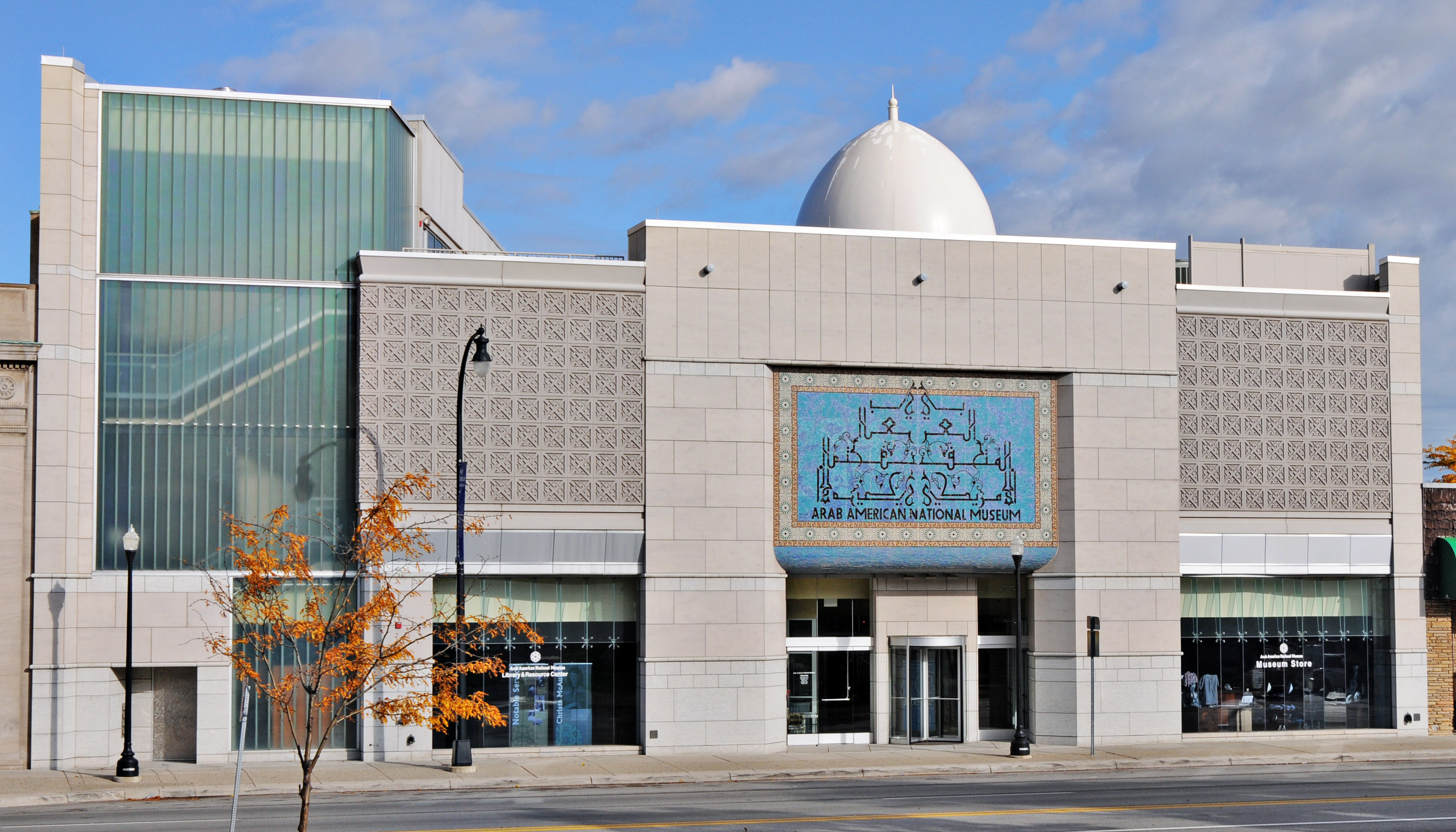 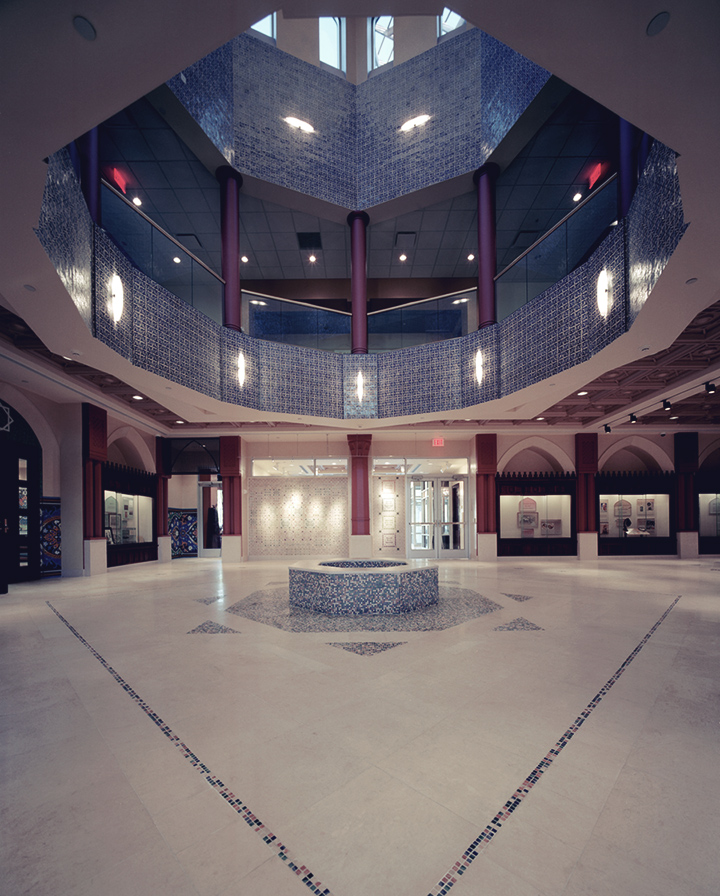 Looking up inside the dome 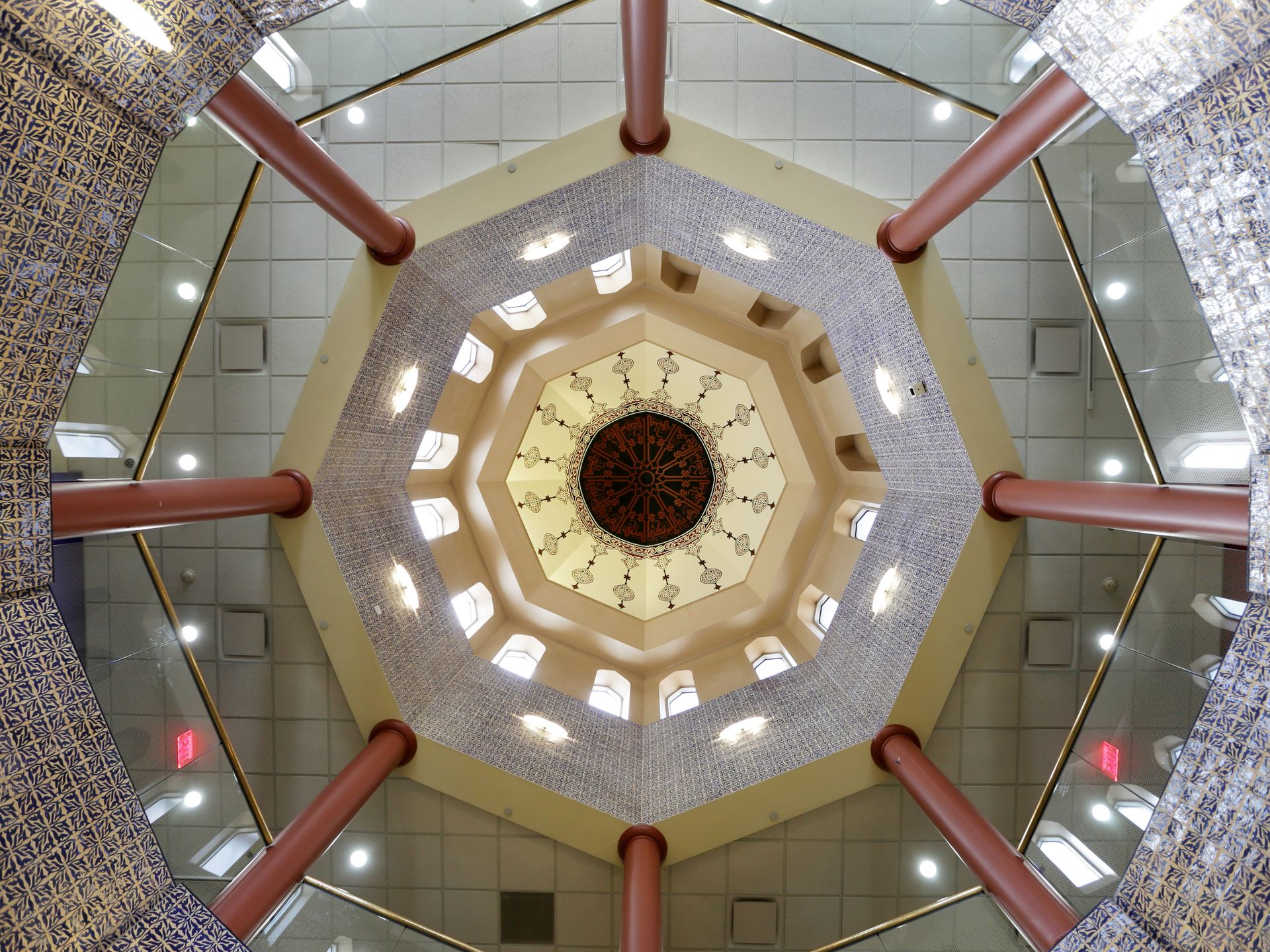 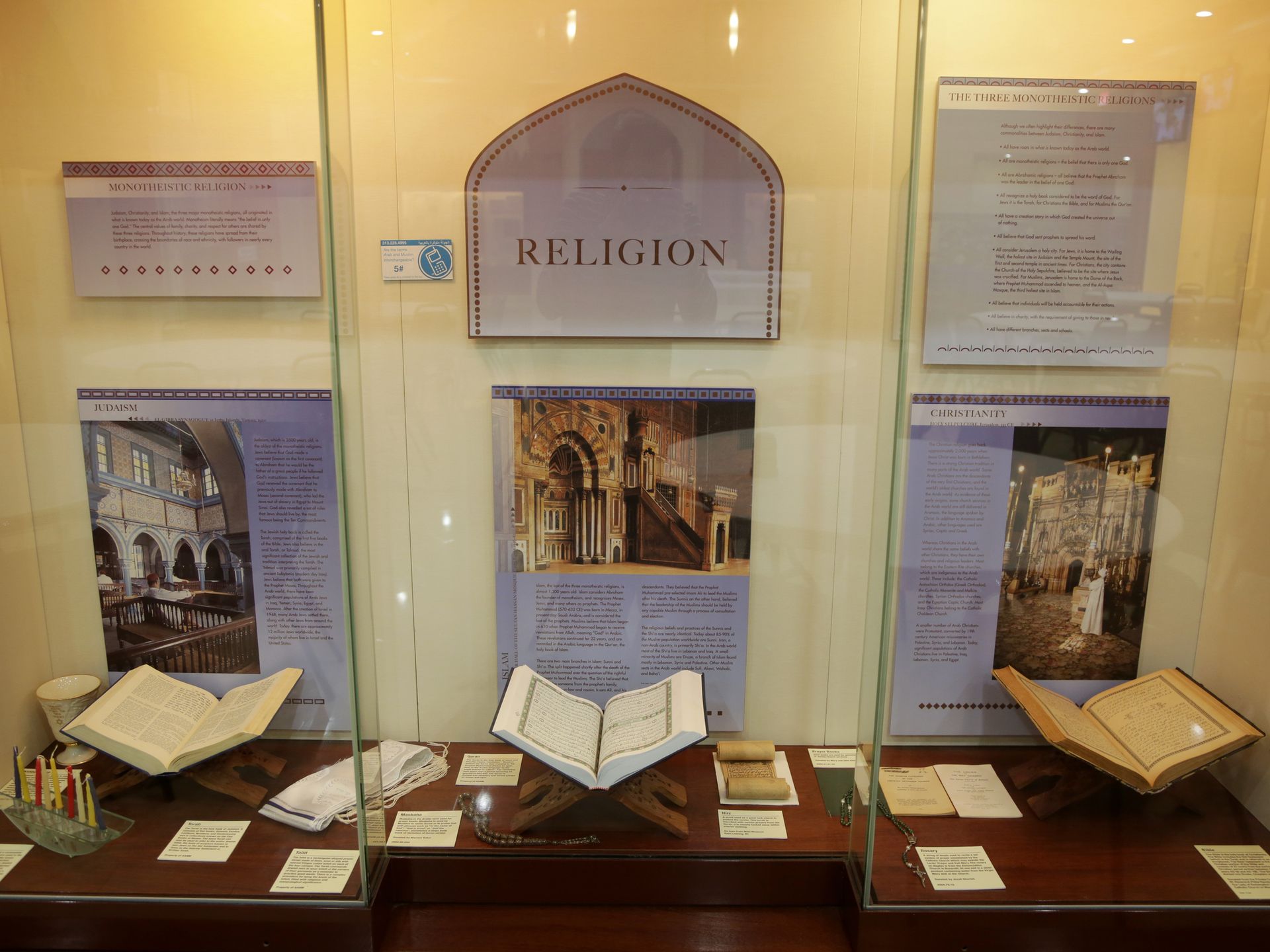 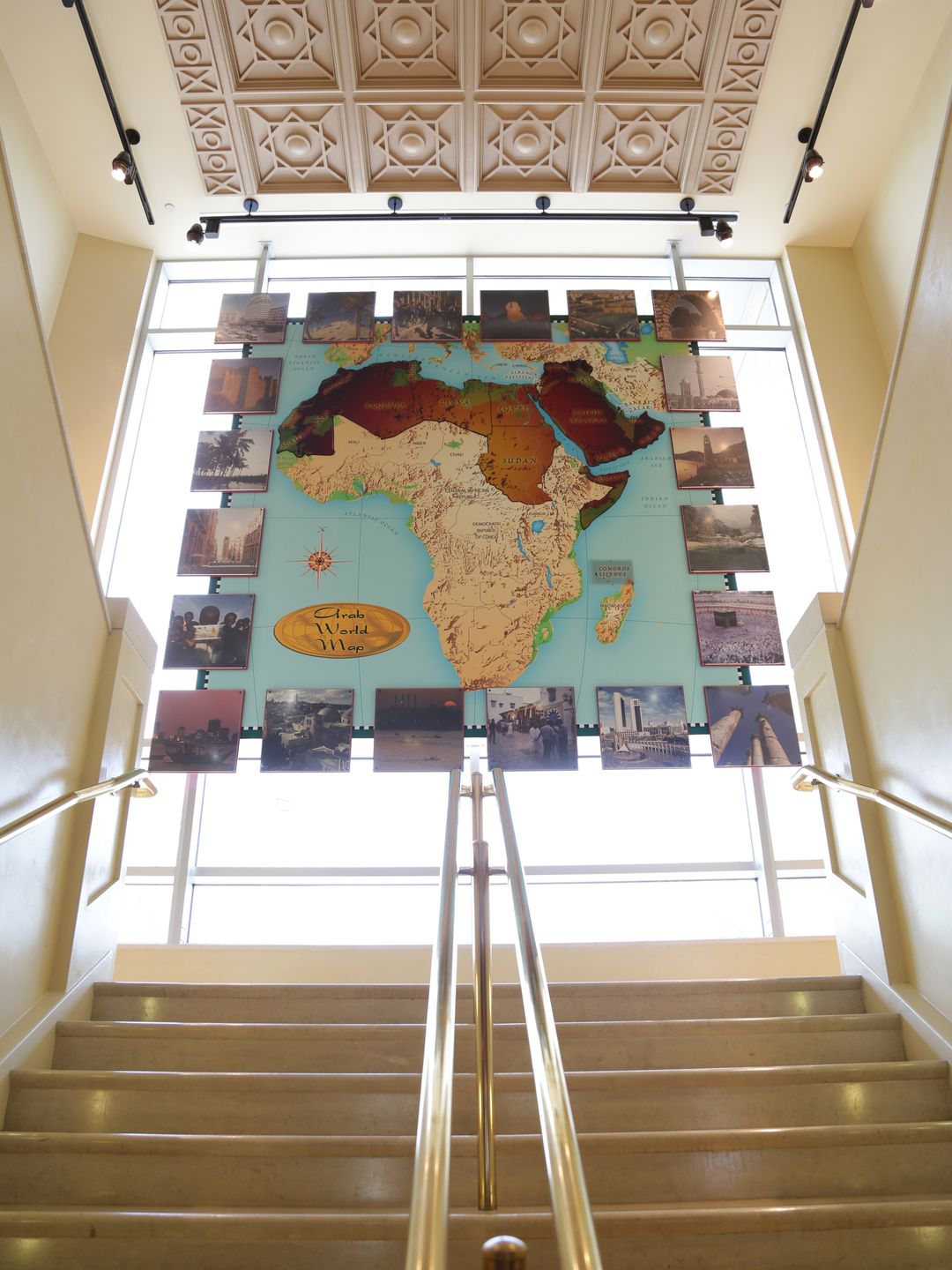 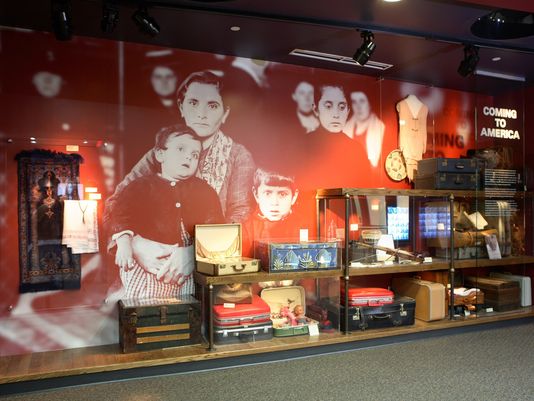 "Making an Impact" exhibit on important contributions by Arab Americans 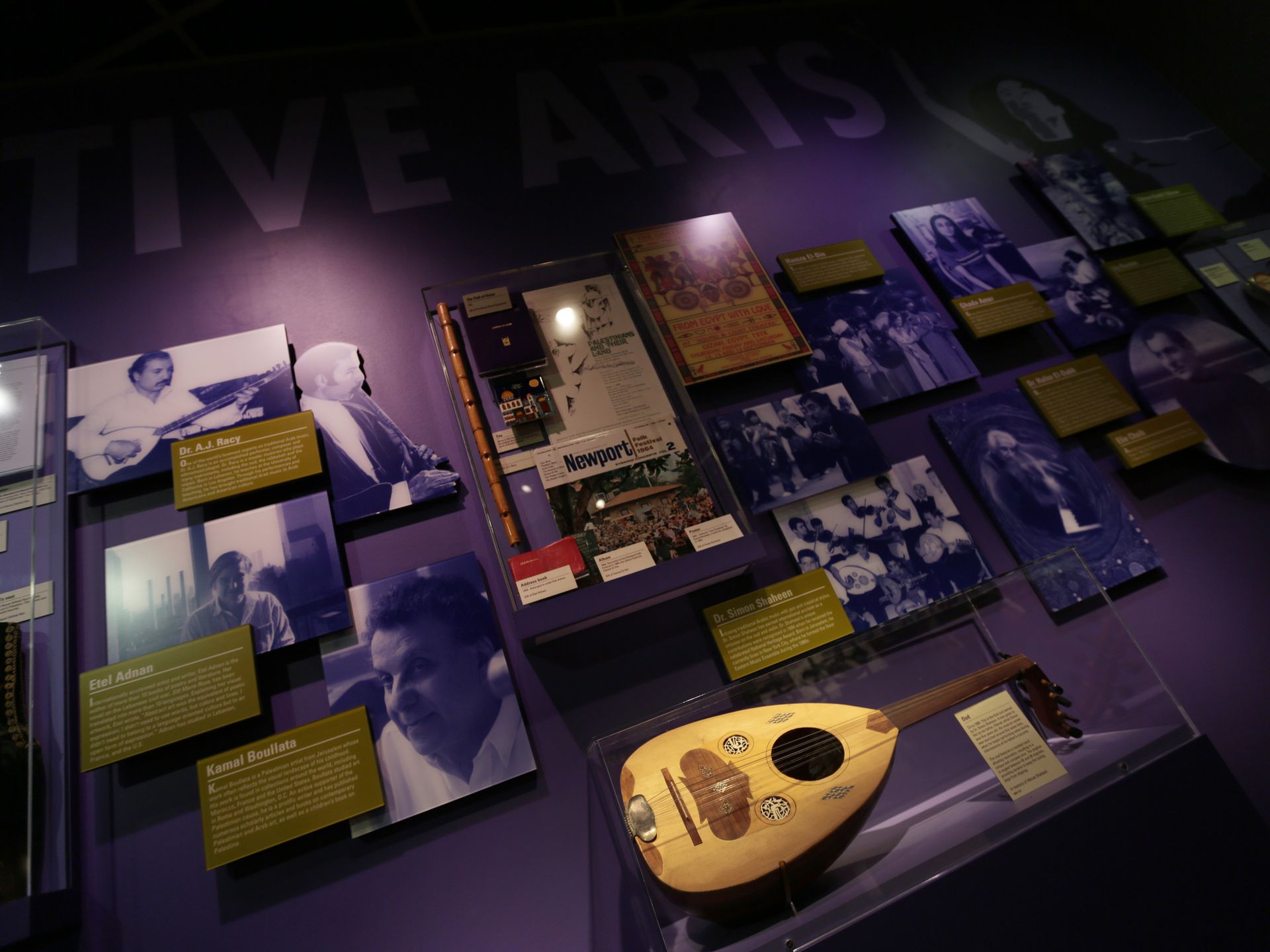 The exterior of the museum is designed with elements of traditional Arab architecture, with a dome roof and geometric designs throughout the façade. The main lobby includes a courtyard space with a fountain in the center. Cases featuring the exhibit “Arab Civilization: Our Heritage” line the walls. Next to the courtyard is the temporary exhibit gallery. There is also a conference room and a research library on the main floor. The museum’s store sells artwork imported from various Arab countries as well as some by local Arab American artists.

There is a map of the Arab region on the stairs leading to the museum’s permanent exhibits. The first exhibit is called “Coming to America” and tells the story of Arab American immigration. Political and economic instability were some of the reasons Arabs fled their native lands. Exiles and war refugees from places like Syria, Lebanon, Palestine, and Iraq have been immigrating to the U.S. since the early 1900s. Many settled in urban areas that promised good employment, such as with Detroit’s auto industry. Others became peddlers and grocery store owners, inviting family back home to come to America to work with them. In the “Living in America” exhibit, the visitor learns about many aspects of Arab-American life in the U.S., such as hospitality, religion, and cultural celebrations. The “Making an Impact” exhibit focuses on the economic, political, academic, and cultural contributions of Arab Americans to U.S. society. 1

A major goal of the museum is outreach and community interaction. The museum offers tours and hosts a variety of events and public programs, such as performances, film festivals, art workshops, and diversity training. It is one of the few museums in Michigan affiliated with the Smithsonian Institution, with which it collaborates on projects. The museum also loans out exhibits from its collections for display across the country. Museum Director Devon Akmon said this in an interview about the museum’s tenth anniversary in 2015: "It's a major undertaking, a major responsibility, especially at a time when there's a general lack of greater knowledge out there about who Arab Americans are, what their contributions have been to this country. […] To be able to be a beacon of accurate information is a responsibility that we're quite proud of."2