The Tampa Bay History Center is a three-story building in downtown Tampa, set right along the river, that tells the story of thousands of years of Florida history. There are dozens of exhibits throughout the the museum, both permanent and temporary, that educate visitors about everything from the ancient culture of Florida's Native Americans to Tampa's modern role as a port city. Along with the exhibits, The History Center also has a museum store, the Witt Research Center, a map gallery, event hall, and the Columbia Café, a cafe that serves Cuban food. The museum is a Smithsonian Institute Affiliate, which guarantees free admission. 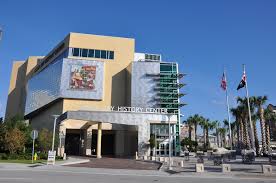 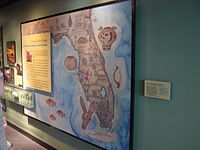 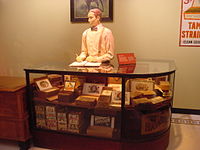 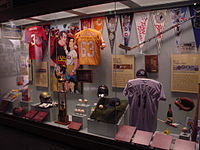 The Tampa Bay History Center was first established in 1993.  Its home was on Franklin Street until 2009, when the construction on the building at Old Water Street was finished.  The new structure is a marvel of "green" buildings, with the recycled materials used in its construction and argon gas windows that shine natural light into the atrium.  The museum has sixteen permanent exhibits that tell about the state of Florida's history.  The first floor's exhibits are mostly dedicated to Florida's first peoples.  One exhibit has artifacts belonging to the Tocobaga and Calusa tribes who lived in Central and South Florida for over thirteen thousand years.  Another exhibit is about the Seminole and Miccosukee, Native American tribes that lived in the Tampa Bay area.  In the Seminole and Miccosukee exhibit is a replica chickee, a structure made of palmetto thatch over a cypress log frame.  Also on the first floor is an exhibit about the colonial era Spanish explorations of Florida, as well one called "Cigar City," which is about Tampa's huge cigar industry in the 1920s.

On the second floor the exhibits are more about Florida's pioneer past.  There is a replica log cabin, an exhibit on cattle drives, and displays about Fort Brooke, a U.S. fort that had been established in Tampa after Spain gave Florida to the United States.  There is also the J. Thomas and Lavinia W. Touchton Collection of Florida Cartography, a gallery that houses three thousand maps of Florida.  The museum hosts various programs throughout the year, including historical lectures, a sangria club, Saturday kids activities, and a "My Doll and Me" drop-off program where kids can explore the time periods of their favorite American Girl characters.  There are many special holiday events throughout the year as well, such as a Halloween trick-or-treat event, a Fourth of July celebration, and Christmas holiday craft making.