President Ronald Reagan was born on February 6, 1911 in Tampico, Illinois in an apartment above a bakery. However, as a boy, the future President had a very transient childhood, moving several times. In 1920, the family rented a house in Dixon, Illinois when Reagan was only nine years old and they lived there until 1924. According to the Boyhood Home website, the Reagan family always rented homes until their son, became financially secure enough to buy them their own home in California. The Reagan Boyhood Home Preservation Foundation was established in the early 1980s in order to restore this home on Hennepin Avenue to the appearance of the original Reagan household. In addition, the public can visit the Visitors Center on the Property and see the statue of Ronald Reagan on the property. 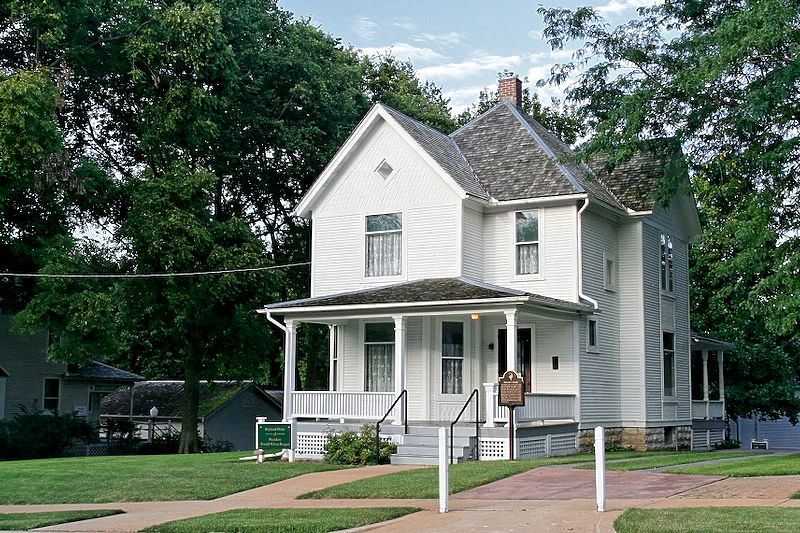 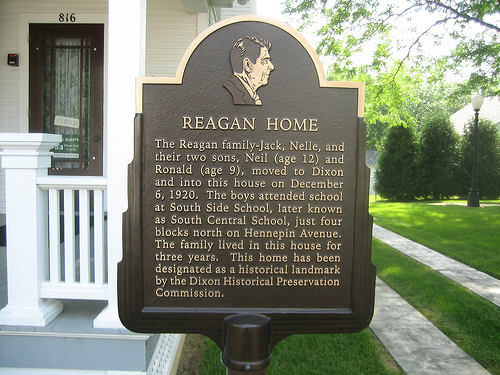 Statue of President Reagan on the property. 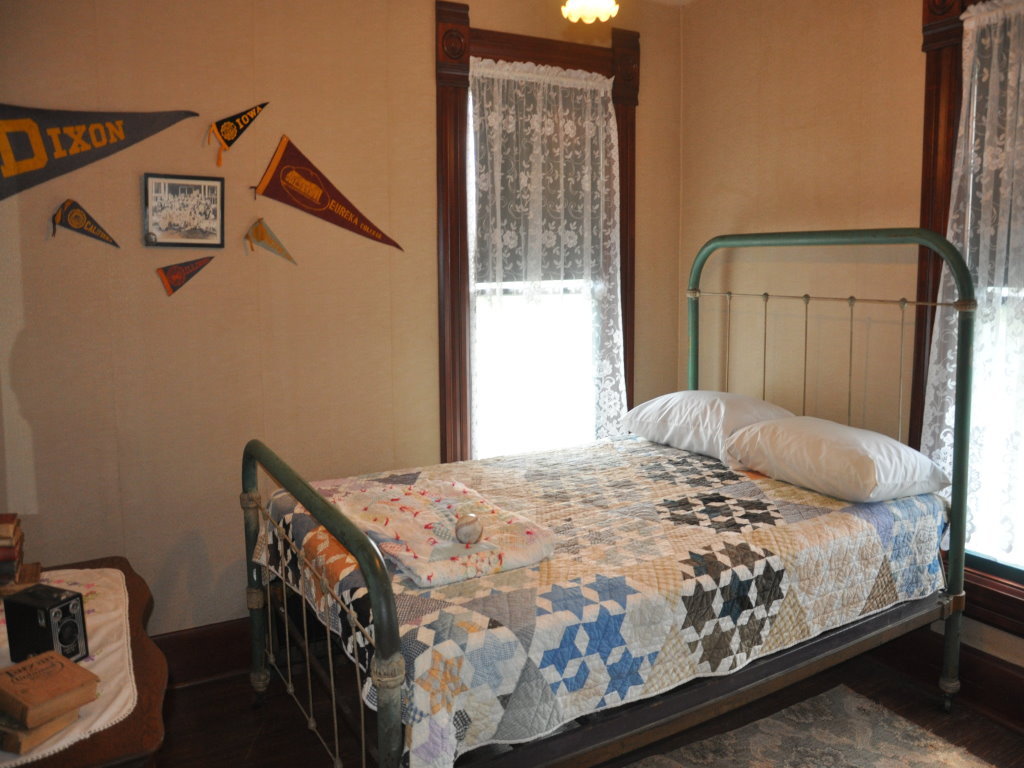 This home, which is now a restored museum with memorabilia from the Reagan family, was built in 1891 by William C. Thompson. The cost to build was $1,500, including the barn behind the home1. The cost of rent for the Reagan family was $15 a month. According to the National Park Service, the house is consistent with 19th century style and has two stories. The first floor is corporate family space with the presence of the kitchen, double parlor, and pantry, and dining room. In the front parlor, a tile-trimmed fireplace is adorned with Reagan family photographs. There is an entryway that gives access to these rooms. On the second floor of this gable-roofed home, are all of the private bedrooms where the family and guests would have stayed. The house has been restored to what it might have looked like in the 1920s when the Reagan family lived there.

Specifically, the bedrooms on the second floor are President Reagan's childhood bedroom with photographs and sports' pennants on the walls and a guest room with a sewing machine in the corner and sewn dress on the bed. According to the information given on the home tour, Ronald's mother often sewed for alternative income. Photographs of the Reagan family sit on the fireplace's mantle. In 1984, President Reagan, and the first lady, Nancy Reagan, visited the home and ate dinner in the dining room before leaving for Dixon High School, his alma mater, for the celebration of his 73rd birthday3. The dinner had to be prepared by the White House chef to prevent tampering with the food.

The Reagan Family and  Little Ronald "Dutch" Reagan, (as he was nicknamed by his father), was very active in Dixon, Illinois. According to the 2001 House of Representatives Report, which concerns the designation of the house as a National Historic Landmark by the Department of the Interior, Reagan actually lived in Dixon also during part of his teenage years  from 1924-28, and "from 1926-1930, Reagan was employed as a lifeguard in Lowell Park in Dixon and is credited with saving seventy-seven lives" (Hassen)4. Reagan and his older brother, Neil, also raised rabbits and "collected birds nests in butterflies" in the backyard2. Reagan also helped teach Sunday School at different times with her2.
One of the period pieces with the home is a Model T Ford that the Reagan family would have driven. In 2012, one of the members of the local Model T club, Fox Valley, visited the house and decided to help repair the car, which was inoperable and dilapidated5. After a monetary donation from a club member, the engine was replaced and glass was donated, as well as parts and labor to rebuild the car5. The local school children also helped pick out a name for the Model T, Bessy, in an online contest5. On June 1, 2013, Bessy was returned to the home in tiptop condition.
Admission for the home is $5 and tours should be booked at least two weeks in advance. According to the website, there is $15 charge if you wish to have extended hours6. Each tour lasts for about and hour, and each tour group receives a list of benefits, including but not limited to: access to the Reagan Memorial Park, barn and Model T, as well as access to the vegetable garden6.