Cawston’s Ostrich Farm was the largest breeder of ostriches and producer of ostrich plume products in America during the late-19th and early-20th centuries. It was renowned across the globe for the quality of its ostrich feathers, and was a beloved tourist destination. Visitors could watch as oranges were fed to the ostriches, or ride on a carriage driven by the flightless birds. Families could have their photographs taken, or pictures painted, of them riding ostriches or surrounded by ostrich chicks. Lush, semi-tropical gardens were filled with colourful plants, and visitors could even relax in a Japanese tea house. 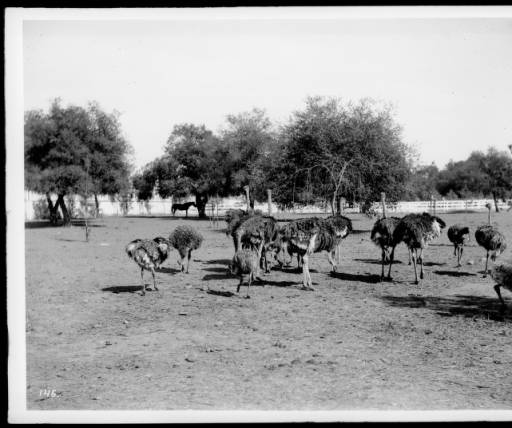 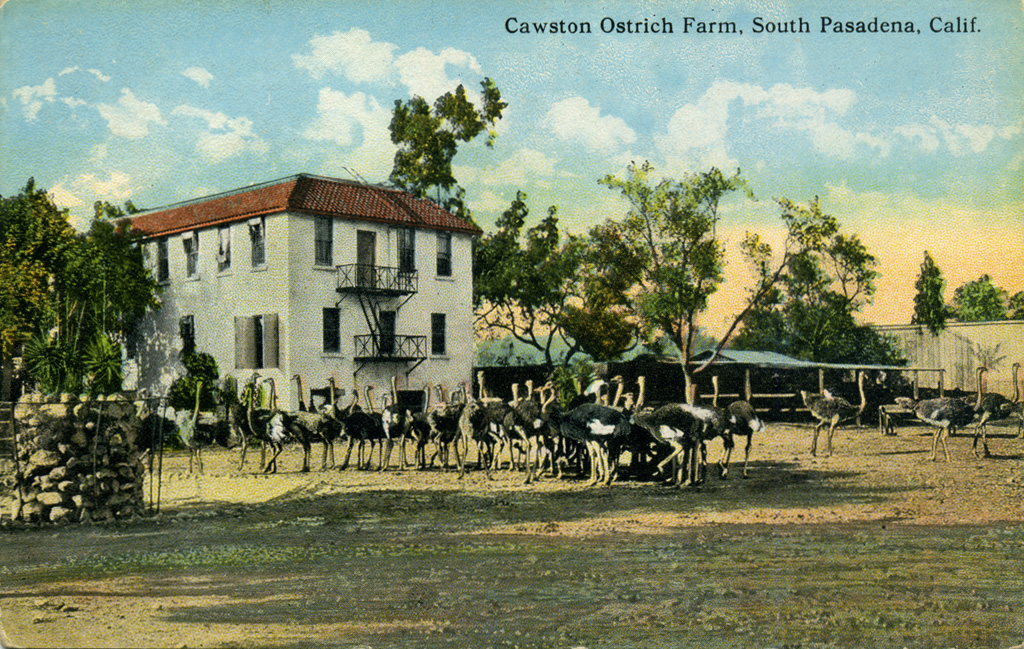 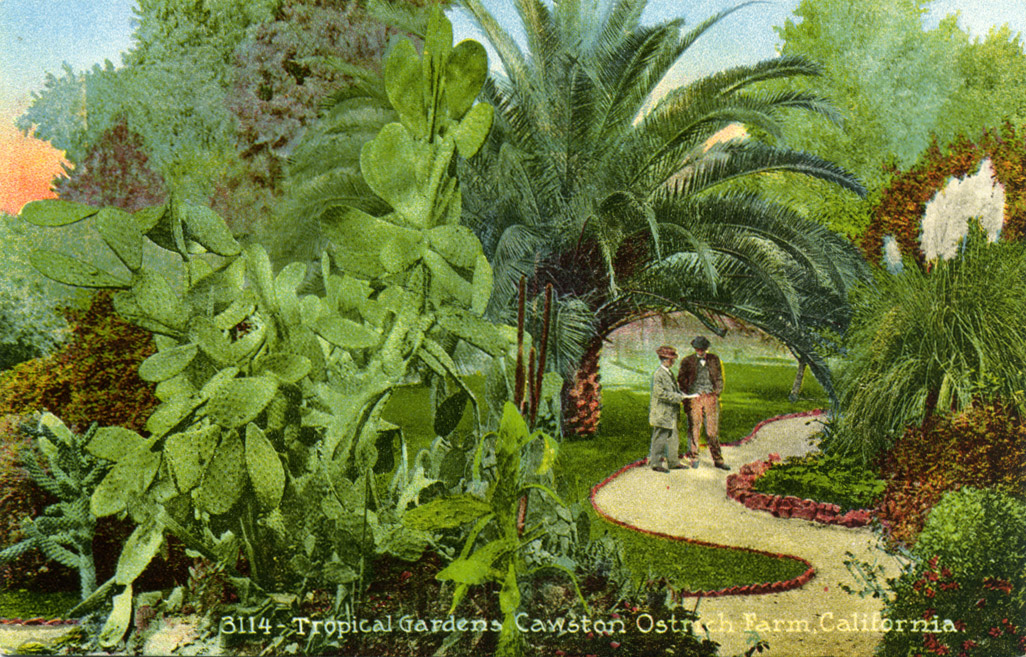 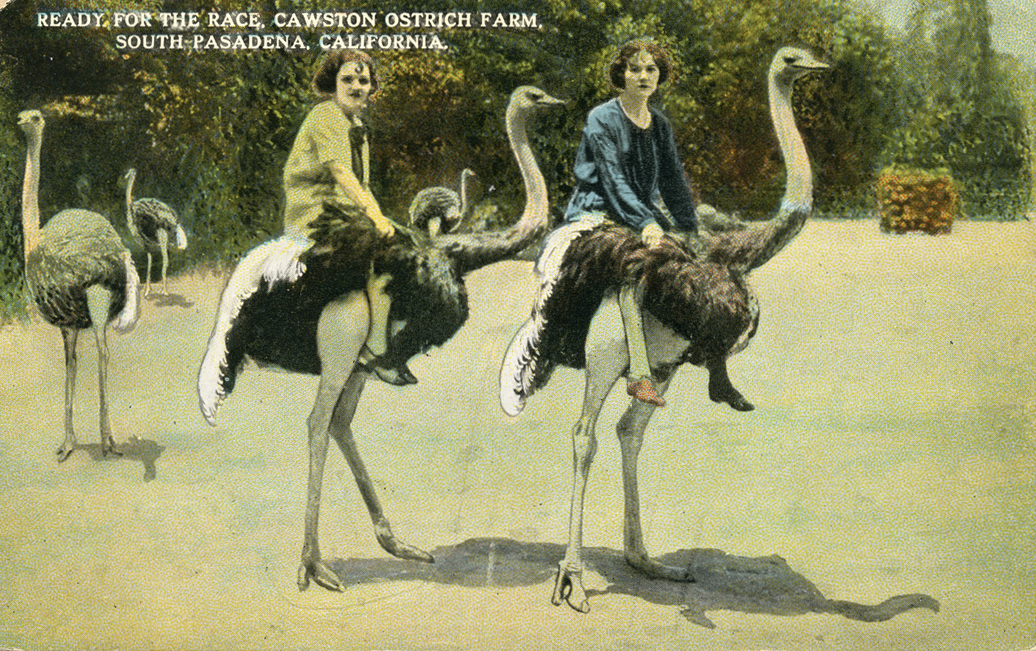 Watching the ostriches being fed oranges was a favourite activity for visitors. Both children and adults would delight in seeing the whole oranges slide down the bird's long neck (www.image-archeology.com) 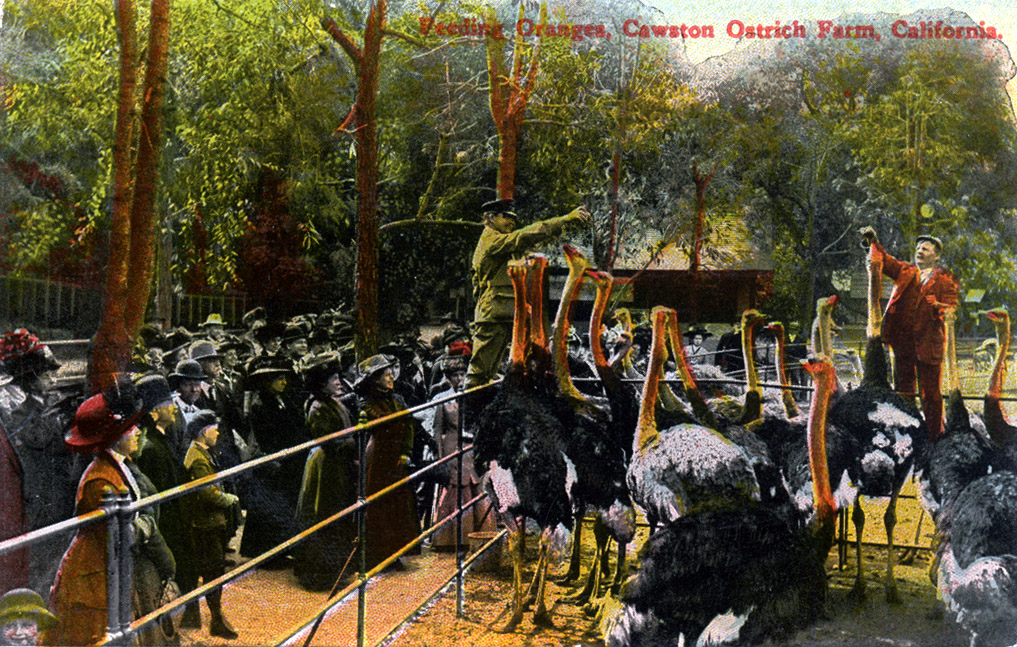 Not everyone enjoyed having their picture taken (www.image-archeology.com) 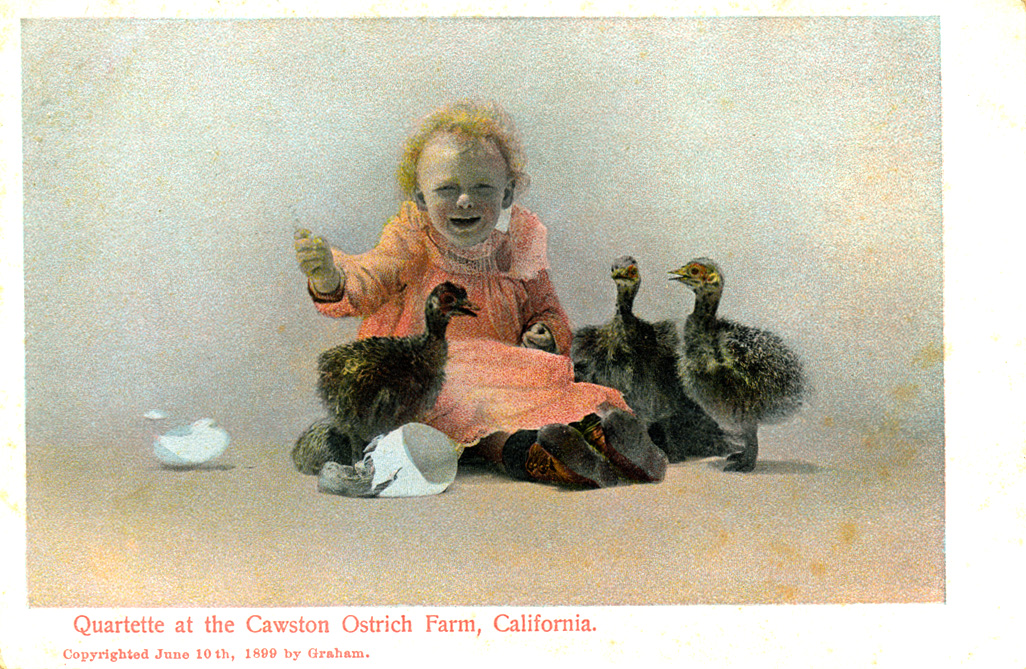 Visitors could ride on carriages driven by ostriches, and would even have races (www.image-archeology.com) 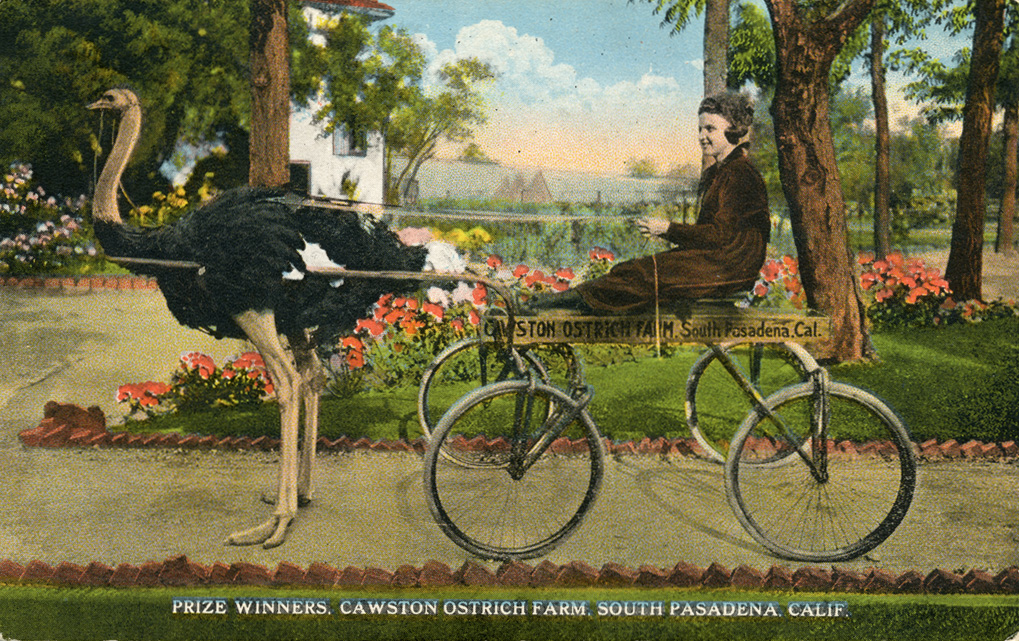 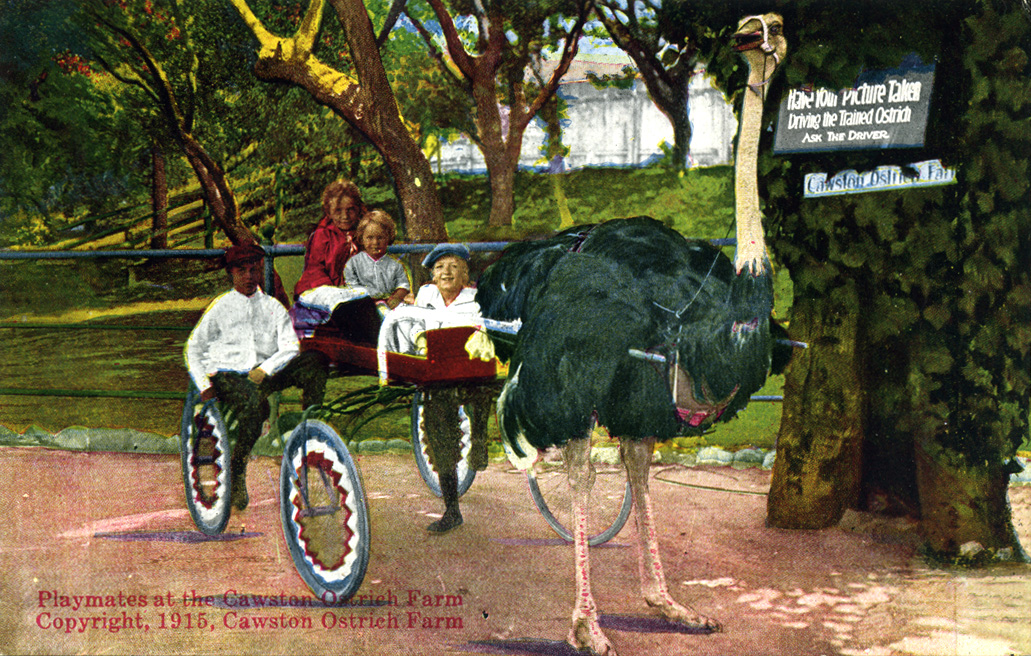 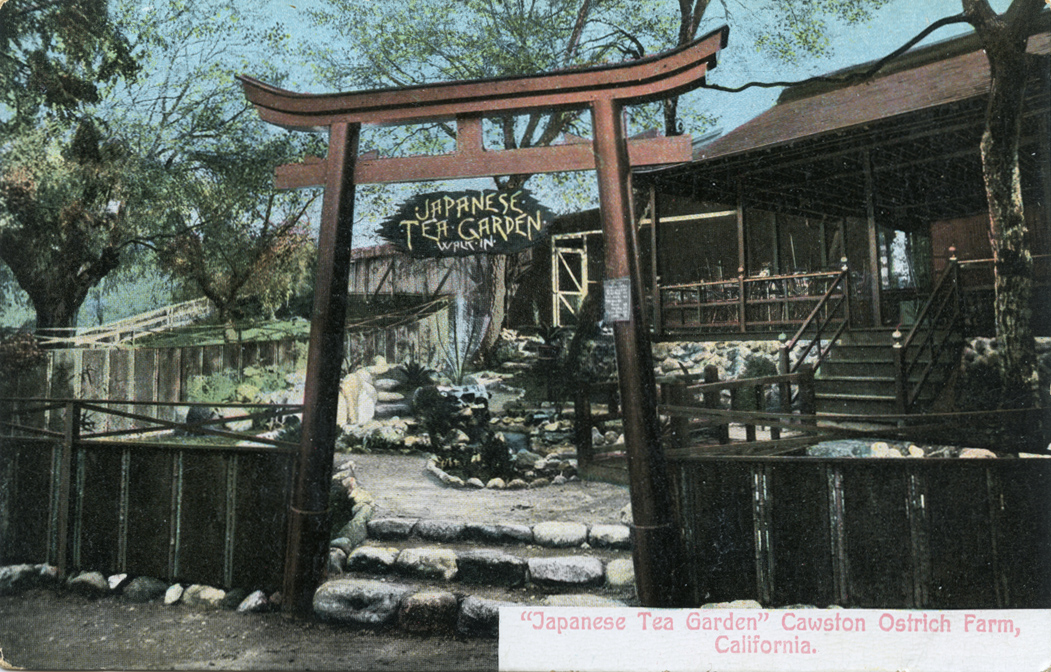 Many of the ostriches upon which people sat for their photographs were, in fact, stuffed - otherwise they would surely have given a few of the visitors a painful peck (www.image-archeology.com) 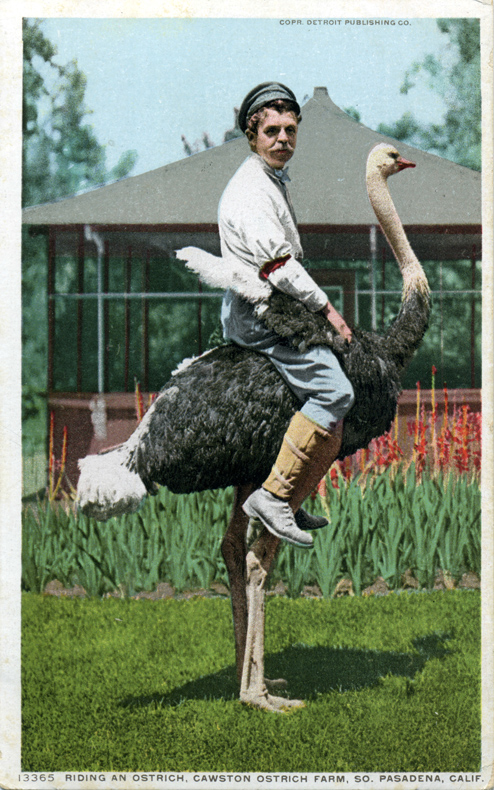 In the second half of the 19th century ostrich feathers were in high demand by high-class fashion designers in America and Europe, to the point where they acquired a higher value than gold. They were used to make fans, hats, military uniforms, and many other garments. California was the perfect environment in which to raise ostriches, and a number of entrepreneurs began breeding the enormous birds in the 1880s. There are various accounts as to how Edward Cawston, a rancher based in Norwalk, first acquired his ostriches. Some state that he bought them from the Englishman Dr. Arthur Sketchley, who had imported them in 1886 from Port Natal, South Africa. Other accounts maintain that Cawston himself smuggled the ostriches out of South Africa.

The farm was first located at the Los Feliz Ranch, present-day Griffith Park, where visitors would arrive via the Ostrich Farm Dummy Railroad and pay the 25¢ admission charge to spend a gleeful day amongst the birds. In 1896 the farm moved to Lincoln Park, South Pasadena, as the old ranch was too small for Cawston’s expanding operation. This farm featured large pens for the birds, a cafeteria, and a gift shop that sold a number of ostrich feather goods. A factory complex was built to process the ostrich plumes and prepare them for export. One building was devoted to incubating the ostrich eggs. Fully grown ostriches were brought into a corral, in which their white plumes were plucked. Each bird could provide up to 1lb of feathers, and by 1896 Cawston had acquired over three thousand ostriches. The feathers were then dried and colored, before being prepared for shipping – Cawston’s received up to sixty thousand orders from around the world each year.

The farm was sold in 1911, and Cawston returned to his hometown in England. The First World War had a strong impact on global demand for ostrich feathers, and the industry had almost entirely fizzled out by the 1930s. Cawston’s farm closed in 1935, the buildings were demolished, and the remaining birds were donated to the California Zoological Gardens.