View inside the arena. Source: basketball.ballparks.com 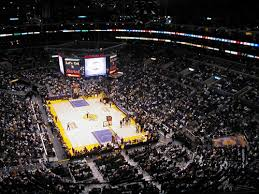 The Los Angeles Lakers are regarded as the most historic of the four professional sports franchises currently home to the Staples Center. The Staples Center has housed 5 NBA titles from the Lakers, and many historic moments. One such moment was Kobe Bryant's 81 point game against the Toronto Raptors which is second only to Wilt Chamberlain's 100 point game for highest scoring game by an individual in NBA history. The Staples Center hosted many great Lakers in the likes of Shaquille O'Neal, Kobe Bryant, Derrek Fisher, Rick Fox, Devan George, Robert Horry and NBA greats who finished their careers in LA such as Karl Malone and Steve Nash. So while the Lakers may not always be in future championship games, the have still been one of the NBA's most historic teams and they call the Staples Center home.