The Ford Highland Park Plant opened in 1910 and holds a significant place in the history of the automotive industry. The factory was the second home of the Ford Motor Company as it produced the extremely popular Model T automobile, which transformed the lives of average Americans in many ways. At the Highland Park plant, Henry Ford introduced his innovative assembly line process, forever changing the way the industrial world's approach to manufacturing. 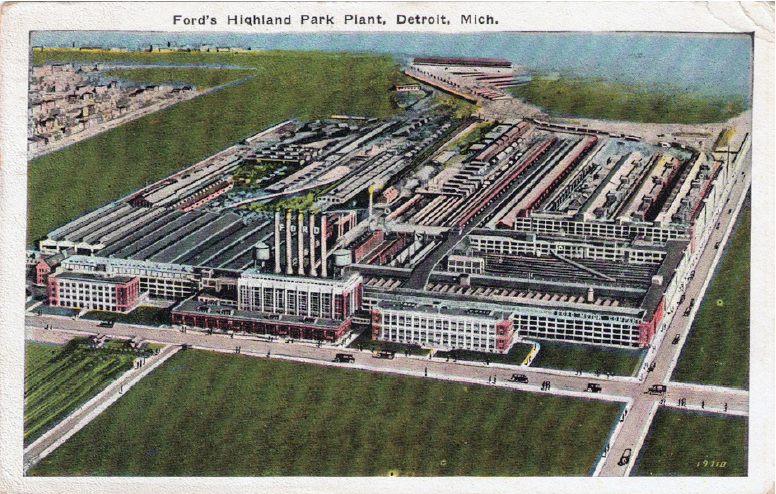 One day's worth of cars assembled at the Highland Park plant 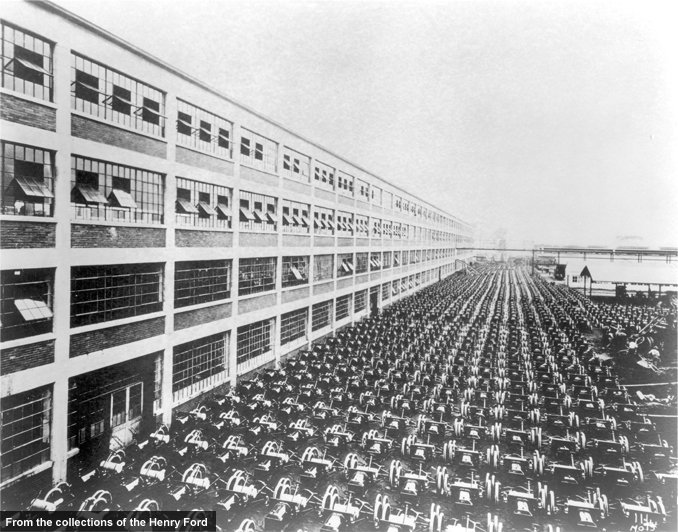 The assembly line at Highland Park 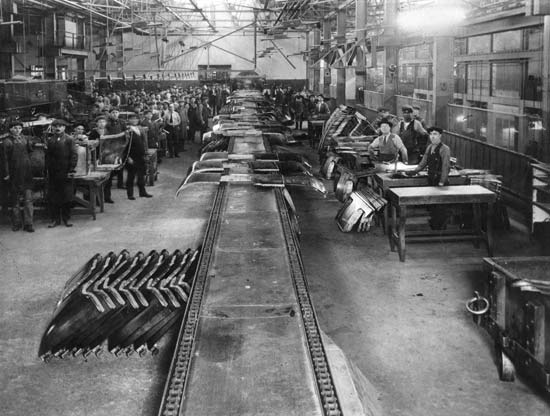 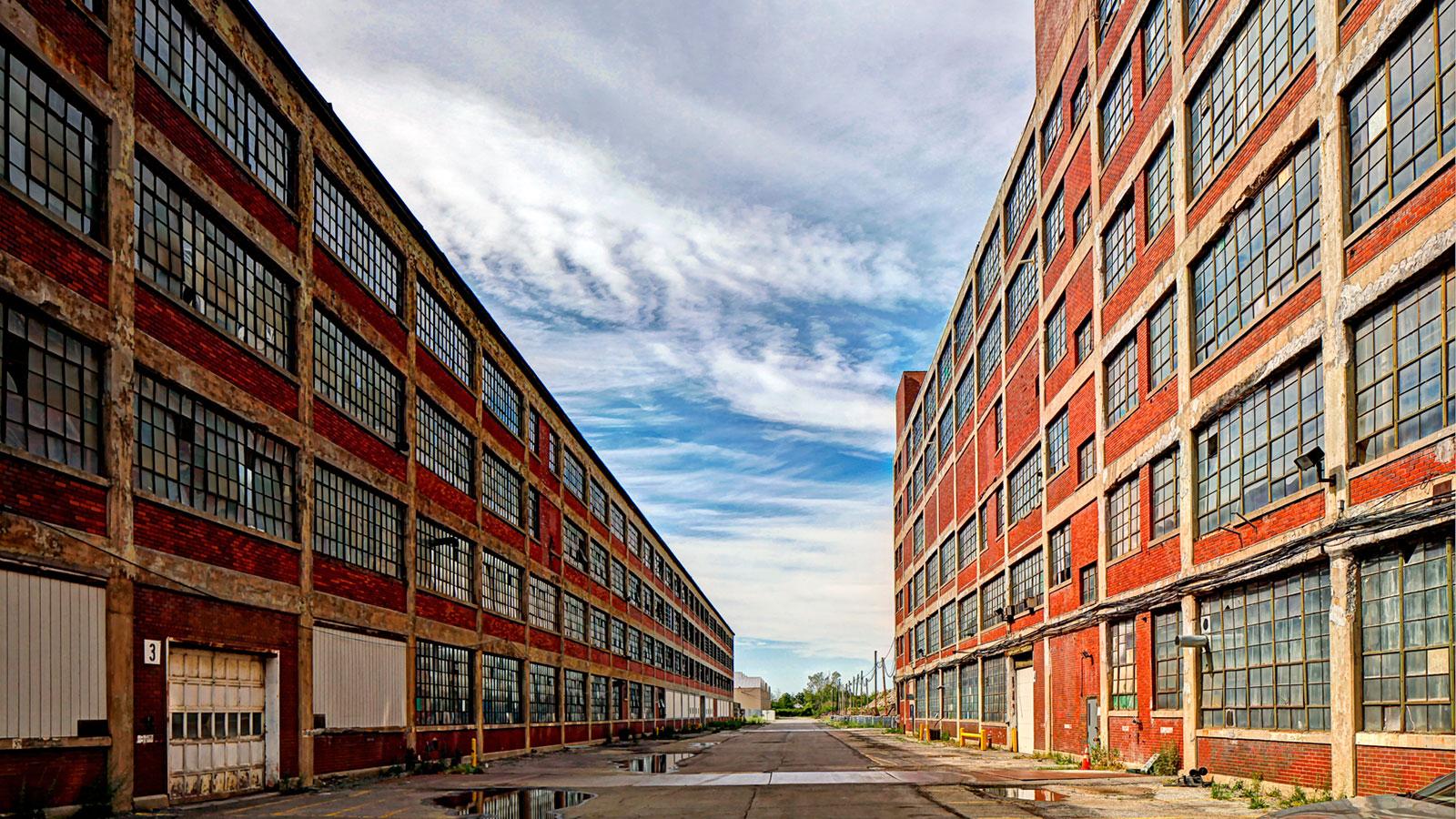 Highland Park is on the National Register of Historic Landmarks 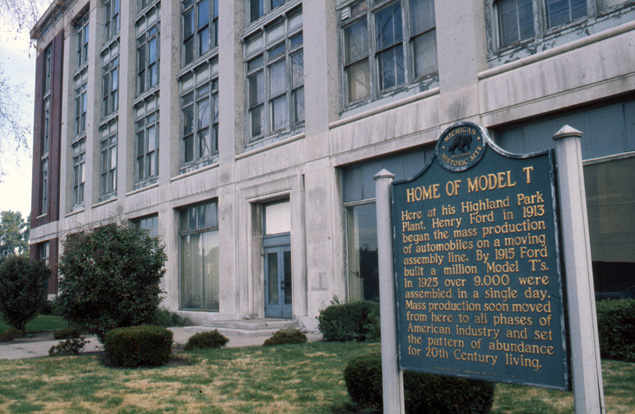 It is not enough to say that Highland Park changed the auto industry, or even Detroit. The innovations that Henry Ford launched at Highland Park changed the world. The assembly line created mass production and changed the way the industrial world operated. Reducing the time needed to assemble a car from 12 hours to only 90 minutes resulted in cost production and put car ownership within the reach of the average family. Doubling the wages of Ford’s employees from $2.34 an hour to $5 an hour helped create the American middle class. Yet today, this momentous historic site is just another vast, crumbling building in Detroit’s landscape.

Highland Park opened its doors in 1910. The facility was constructed to replace the first factory built for the Ford Motor Company, the Piquette Avenue plant. The company had only started in 1903, but business was booming, and it had outgrown the Piquette plant in just a few years. Detroit native and noted architect Albert Kahn designed the main part of the complex. Highland Park consisted of 130 acres, almost two dozen buildings, and more than two million square feet of factory workspace.1 It had huge windows which allowed natural light in at a time when electricity wasn’t very reliable or practical for such a large space, and so the plant was nicknamed the “Crystal Palace.” The Detroit Historical Society has this to say about the design of the complex:

“The plant included offices, factories, a power plant, and a foundry and it became a model after which many factories and production plants were built.  Kahn designed a plant that contained two buildings which ran parallel to one another.  One building was four stories tall while the other was just one story tall.  The one story building was the wider of the two, spanning 140 feet wide.  Between the two plants was a very large crane way that allowed cranes easy access to deliver parts to both side of the plant.  Both facilities included a beautiful skylight that allowed for a relaxed work environment.  Although they were two separate buildings, they functioned as one single unit.”2

The assembly line at Highland Park was launched on October 7, 1913. The time it took to build Ford’s Model T was reduced from about 12 hours to only 90 minutes.3 The Model T had been launched at the Piquette Avenue plant years earlier and was already wildly popular for its affordability and quality. However, by perfecting the assembly line production at Highland Park, Ford was able to make it even more affordable, reducing the cost of a Model T from $850 to only $300. 15 million Model Ts were sold while they were in production from 1908-1927, making up over half of all automobiles sales worldwide. Furthermore, the assembly line concept caught on with other manufacturers, who used the same process to create their own products. Mass production was born, and the assembly line persists as a manufacturing model today, to make everything from potato chips to refrigerators.4

In 1914, Ford also instituted a 40-hour work week and increased his workers wages from $2.64 per hour to $5 per hour. This huge increase was a bold and risky move on Ford’s part, and he was criticized for it. But in the end, it created loyalty between his employees and the company, and, significantly, allowed the workers to have enough to purchase the very product they were creating. With car ownership skyrocketing, a new age in American transportation and way of life surfaced. People now had the freedom to move and live where they liked, starting the development of improved road infrastructure.

Just like with the Piquette Avenue plant, the Ford Motor Company quickly outgrew even the vast Highland Park complex. In the late 1920s, most of the car production was moved to the new River Rouge plant, with the Highland Park facility being used for car trim manufacturing and tractor assembly. Today, there are plans underway to turn the huge Highland Park complex into an “Automotive Heritage Welcome Center.” The center would serve not just as a museum with tours to tell the history of the plant, but also a headquarters of sorts for many of the sites related to Henry Ford and the automotive industry in the area. There are big plans to use innovative technology to educate but also entertain as a cultural tourist destination. It is also expected to become an important source of job development and neighborhood revitalization for the Highland Park/Woodward Avenue area. The Woodward Avenue Action Association owns two of the main buildings and is in the process of raising more funds to open the Welcome Center, which they hope to be in operation by 2019.