The Museum of World Treasures is a natural and cultural history museum founded in 2001 by Dr. Jon and Lorna Karadatzke. The museum features exhibits displaying a wide variety of natural and human artifacts from around the world. Exhibits cover topics such as the Cenozoic era (the period after the dinosaurs), Asian art and artifacts, World War II, European royal history, the American West, ancient history, and pre-hispanic art. The museum also features Ivan, a 38-foot long T-Rex skeleton (and other dinosaur specimens). If alive he would have weighed over 10,000 pounds. Ivan, who was found in the Hell Creek deposit in South Dakota—where many other dinosaur fossils have been found—is the only T-Rex found with a complete set of vertebrae. Next to Ivan is another interesting artifact: a portion of the Berlin Wall (it is too heavy and too tall to be in the World War II exhibit).

The Museum of World Treasures was founded in 2001 and moved to this location in 2003. 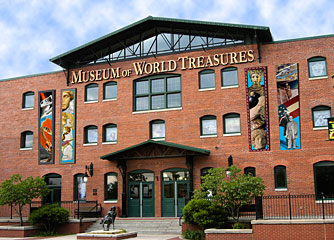 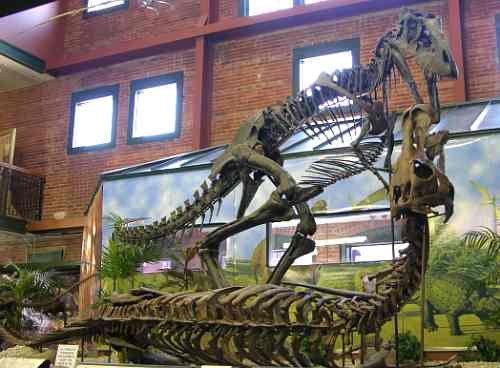 The Museum of World History is a three-story building containing over 300 collectors' items, three complete fossil dinosaurs, and several different exhibits displaying artifacts from around the world.Upon opening, the museum only contained collections from the founder, Dr. Jon Kardatzke. As the attraction from visitors became more frequent and in larger numbers, the collections displayed in the museum began to grow. The people who shared the love of history with Kardatzke enjoyed sharing their collections with others and in 2003, the museum became so full that it had to relocate to where it is now.

Each floor of the museum has its own exhibit. The first floor is where the dinosaurs are located, sea creatures, ancient mummies from Egypt, and civilizations throughout the world. The second floor is more gallery type settings. Signatures from all of the American presidents, leaders throughout Europe, Weapons from various wars—including the Civil War, both world wars, and the Vietnam War—are also on display. The third floor contains artifacts from the old West times, such as Native Americans, to artifacts used by famous sports team players.

"About Us." Museum of World Treasures. Accessed April 24, 2017. http://www.worldtreasures.org/worldtreasures.php?name=About%20Us.