The Billy Ireland Cartoon Library & Museum is located on The Ohio State University's Campus, at the north end of Sullivant Hall. The Museum & Library was established in 1977. It is the world's largest repository and research facility for "all materials related to comics and cartoons." According to the Museum's website, these materials are: "original art, books, magazines, journals, comic books, archival materials, and newspaper comic strip pages and clippings." Like many great establishments that provide resources to the community, their first collection consisted of donated artwork of OSU alumnus, Milton Caniff. Many of their materials are gifts to the library. Boredom is never a problem for visitors or researchers as their holdings contain "300,000 original cartoons, 45,000 books, 67,000 serials, 3,000 feet of manuscript materials, 2.5 million comic strip clippings and newspaper pages." There are guided museum tours available for youth, university, family, or friend groups. Guided Tour Requests must be made three weeks in advance by emailing cartoons@osu.edu. 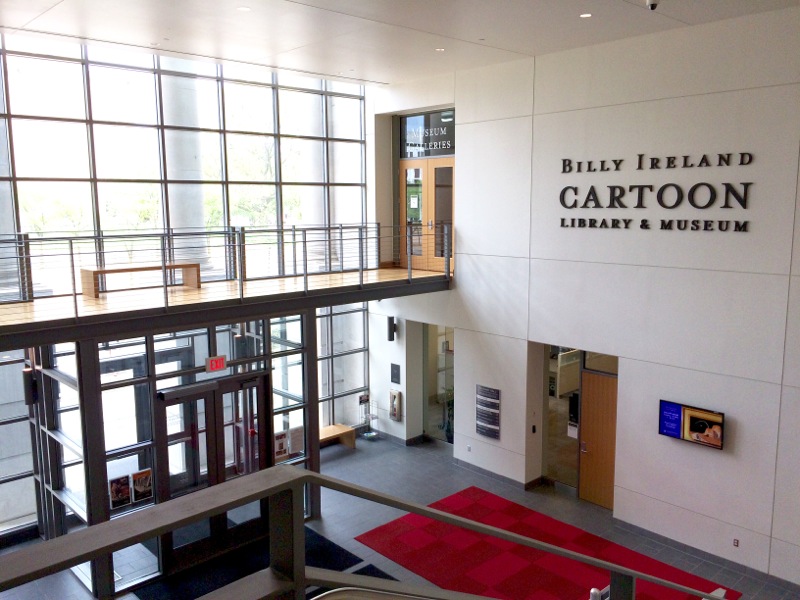 Permanent Exhibit "Treasures from the Collections" 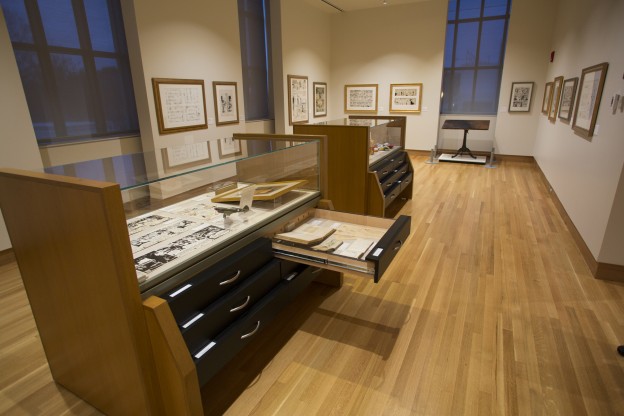 "Calvin and Hobbes" strips in the Bill Watterson Collection from "Treasures from the Collections." 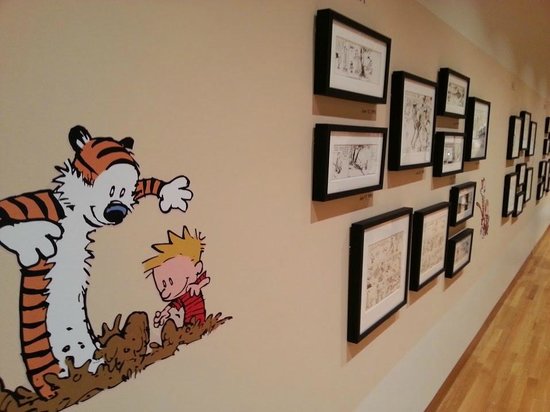 From an early collection of political cartoons to Magna anime in Japanese and English1, students and comic enthusiasts will find endless enjoyment from this museum's collections and exhibits. Originally, two converted classrooms in the Journalism building at The Ohio State University2, The Museum has undergone several name changes and a move to a beautiful, large building since its inception in 1977. Originally called the Milton Caniff Reading Room, based on the 12,000 comic strip donation from Caniff, as the Library expanded with donations, it was soon called the Cartoon Research Library in 1989, when it became apparent that the volume of material needed to be housed in a separate facility. Still, space was an issue, because the material wasn't accessible3. In 2009, with an endowment from a donor, Sullivant Hall was renovated to house the vast amount of material. The Museum and Library were renamed in honor of local cartoonist, Billy Ireland, who from 1908 until his death in 1935, penned and illustrated "Passing Snow" for the Columbus Dispatch, as well as seven editorial cartoons4. In December 2013, the newly renovated 30,000 sq foot building opened to the public, and the reading room is on the west side of the lobby while the galleries with the exhibits are upstairs5.

The Permanent Exhibit at the Billy Ireland Cartoon Library and Museum is called "Treasures from the Collections" and features famous comic strips such as Mort Walker's Beetle Bailey, Bill Watterson's Calvin and Hobbes, and Jeff MacNelly's Shoe, among others. The Museum also hosts temporary exhibits every season. One of the current exhibits that run from June 4, 2016-October 23, 2016 is "Good Grief! Children and Comics," which explores the role of children in the comic genre, as well as the "complicated relationship" children have had with comics. Cartoons explored are Peanuts. Archie and Jughead, and Calvin and Hobbes. The second traveling exhibit for the summer-fall is "Little Nemo: Dream Another Dream," which features famed artist's Winsor McCay's (1867-1934) Little Nemo in Slumberland, reinterpreted as an anthology called Little Nemo Dream Another Dream, which is a summation of 100 "comic artists and illustrators" new creations of this beloved comic6. Information on upcoming and past exhibits can be found on their website, and past exhibits cover a myriad of themes and topics, including Puck, the political humor magazine, interpretations of World War I through the medium, Jewish comics, and Japanese anime comics, among others. In addition, online exhibits can be accessed through the Library & Museum's website. Collections housed in the Billy Ireland Cartoon Library & Museum include: The Jim Borgman Collection, The WIll Eisner Collection,The Edwinna Dumm Collection, The Bill Watterson Deposit Collection. and the Walt Kelly Collection2.  In an interview with NPR, former curator Lucy Shelton Caswell, discusses how they acquired one of their largest collections, the San Francisco Academy of Art Collection,

[U]nfortunately, librarians bought into this [the loss of the newspaper industry] a little bit too much and dumped all of their bound newspapers in the ‘50s and ‘60s. And in fact, we now own quite a number of those, which were acquired by the San Francisco Academy of Comic Art, and its founder, Bill Blackbeard, and his friends clipped comics from those newspapers and filed them by title. So we have about 2.5-million comic-strip clippings as a result of that plus almost 800 bound volumes from the 20th century. And they're in wonderful shape1.

In addition, the the library carries "a biographical registry of cartoonists containing files for more than 5,000 cartoonists and clipping files organized by cartoon-related subjects"2.  The Library and museum also hosts visiting cartoonists and illustrators to talk about their work.

There is no admission fee to the Library & Museum and the building is wheelchair accessible with elevator access to the galleries. In addition, visitors can don white gloves and hold original comic strips or browse specific pages in the Reading Room. In addition to hosting guided tours, the Library also invites college classes to visit in order to learn more about the comic medium.