Plant Hall was formerly known as the Tampa Bay Hotel, which was a 500+ room resort hotel opened in 1891 by Henry B. Plant near the terminus of his rail line. The museum's exhibits focus on Gilded Age tourism, the elite lifestyle of the hotel's guests,and the building's use during the Spanish-American War. In 1972 it became a National Historic Landmark.

Welcome sign and front of the Henry B. Plant museum 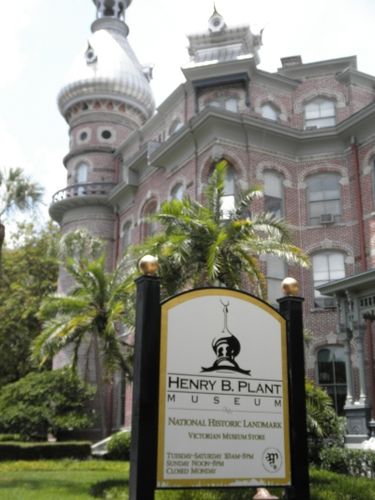 Rough Riders at the hotel, where they encamped, before heading off to Cuba during the Spanish-American War 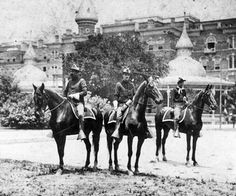 Grand Salon of the hotel 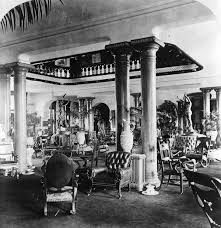 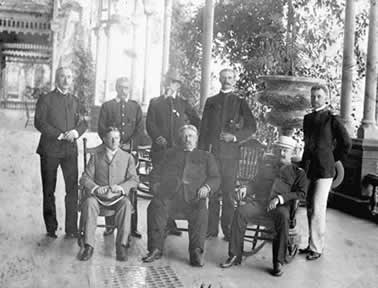 Ad for the Casino at the Tampa Bay Hotel 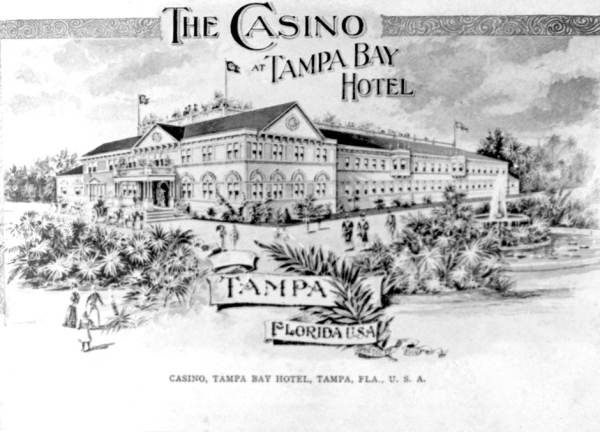 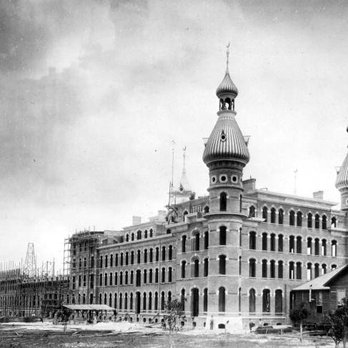 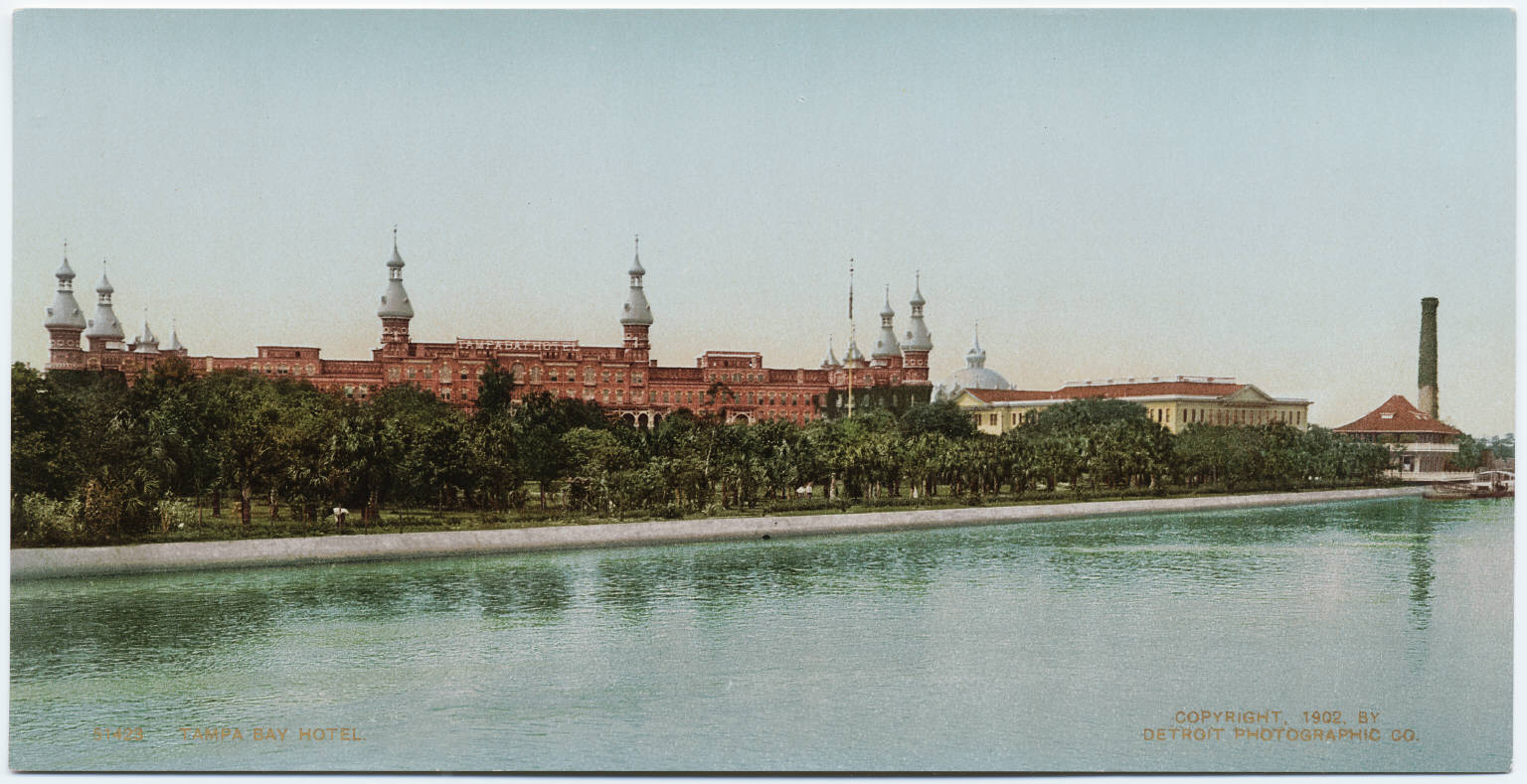 Retouched photo with color of the Sitting Room and Rotunda. Circa 1904 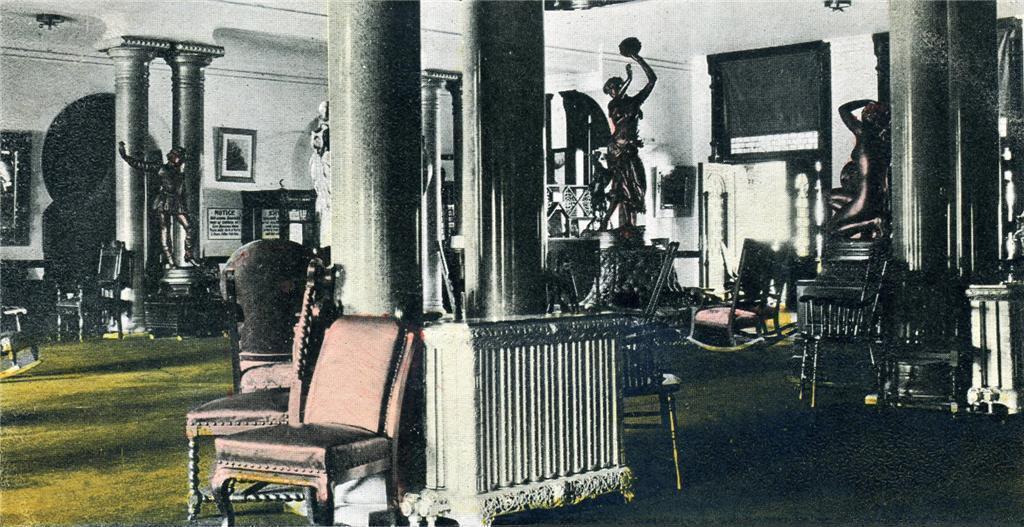 When Henry B. Plant brought the railroad to Tampa in 1884, he opened the door for many businesses to locate and flourish here. The railroad was at the center of the city's economy. From downtown, it ran to Port Tampa City where one could board a Plant Line steamship to Mobile, Jamaica, Cuba, or Bermuda.  Investors were leery of building a hotel of the magnitude Plant envisioned, so Plant decided he would build it himself.

The Tampa Bay Hotel opened in 1891 amid wide fanfare and celebration. The newspapers of the day described it as "brightly illuminated, filled with sumptuous decorations, thrilling music and graced with turrets, domes and minarets towering heavenward and glistening in the sun." This was "Plant's Palace." A spur of the rail line brought the train up to the west front entrance of the Hotel so guests could disembark and walk directly into the lobby.

The Tampa Bay Hotel cost approximately $2,500,000 to build and $500,000 to furnish. Advertised as absolutely fireproof, due to the steel rails for reinforcement and concrete construction, it consisted of 511 rooms.  Some accommodations were suites of three to seven rooms that provided a degree of luxury never before seen in Tampa. Most of the rooms had private baths and all had electricity and telephones.

Back in 1880, Tampa Bay had a population of 720, whereas the entire downtown area was little more than an orange grove and the small community mostly survived on fishing and other endeavors. However, the calm and slow life of Tampa, marked by little contact with the outside world, was forever changed by the arrival of the railroad. Henry B. Plant, one of the most famous railroad men of the country, and at Tampa, Plant saw the terminus of his southern Florida railroad and the home of his line of steamships heading to Havana, Cuba.

The first railroad arrived in Tampa in 1884, and in connection with his development of Port Tampa and his rail and steamship lines, Plant opened up trade throughout the state and into the Caribbean. In about 10 years, Tampa’s population grew from 720 to 15,000, and business and markets bloomed, especially that of the fishing industry. Nearby Ybor City also became one of the world’s leading cigar manufacturers.

To encourage further tourism to the area and to accommodate the winter guests arriving in Tampa, Plant began building hotels along his rail lines. The Tampa Bay Hotel was to become his premier hotel in his chain of resorts, and even today, the building of the Tampa Bay Hotel is symbolic as the first pioneering effort into Florida’s resort business.

Plant brought John A. Wood, a relatively unknown architect at the time from New York, to Tampa Bay to help develop the plans for his luxury resort. Built between 1888 and 1891, the Tampa Bay Hotel cost around $2 million (equivalent to about $52 million today) to construct.

The completed hotel reflected Plant’s taste, and he was known for his eclectic styles. There were Crescent moon-topped, shining Byzantine minarets, circled by cantilever balconies. Each floor was graced with long, gothic windows and red woodwork. Keyhole arches and decorative verandas lined the building. The Hotel was over 900-feet long and contained over 500 rooms, most of which had their own baths, electricity, and telephones, all of which were luxury items at the time.

While traveling Europe following the Paris Expo of 1889, Plant and his wife went on a shopping spree, spending an additional $500,000 to furnish the hotel with French furniture, cabinets from palaces in Spain, mirrors from Venice, redlined carpet from England, and so forth. Plant spared no expense in building a kingdom unlike anything anyone had ever seen. Florida’s first elevator was even featured in the lobby.

On February 5th, 1891, the hotel officially opened with a massive party of 2,000 guests. The New York Times called the hotel one of the grandest in the country, and Florida was touted by other newspapers as an exotic destination. The first season saw more than 4,000 guests, including much of America’s elite.

Although the Tampa Bay Hotel met significant acclaim for its extravagance and beauty, it was actually the Spanish-American war that brought the Hotel into the international spotlight. Using his influence, Plant went to Washington D.C. to make Tampa, as well as the hotel, the center of operations for the war.

Tampa soon became the official port of embarkation. At the outset of the war in 1898, Tampa was flooded with soldiers and all the necessary provisions, and the Tampa Bay Hotel was at the center of it all. Although soldiers (of which included Colonel Teddy Roosevelt and his Rough Riders) camped out on the Hotel grounds as well as other parts of the city, the Tampa Bay Hotel housed army officers planning the war campaign. Also, the Hotel housed news correspondents, mercenaries, foreign military observers, and famous guests such as Clara Barton (founder of the Red Cross) and former Freedmen’s Bureau chief Oliver O. Howard.

After the war, the hotel continued to prosper, but in 1899, Henry B. Plant died of a heart attack at 79 years of age. Unfortunately, Plant’s heirs had little interest in the hotel, and tourism began to wane. The Hotel sold to the city of Tampa in 1905 for a mere $125,000. However, the city embraced the hotel and Plant Park. The exposition hall at the Hotel was a social and meeting center for the city. Babe Ruth signed his first baseball contract at the Hotel, and in 1919, he hit his longest home run at nearby Plant Field.1