The Battle of Machias was fought from June 11-12, 1775. Merchant Ichabod Jones received permission to sail to Machias in order to trade with their people. After Jones had angered the people of Machias by denying trade to those who had initially opposed his offer, Captain Benjamin Foster led his militia's attack against Jones, prompting Jones to flee to the woods for two days, and Midshipman James Moore to flee in the Margaretta. The people of Machias seized the British ship Unity and battling at sea, returned the Margaretta to Machias. Moore was injured in the battle and died the next day in Jones' nephew Stephen's house.

This plaque was dedicated in 1927 and can be found on the lawn of the Washington County Courthouse. 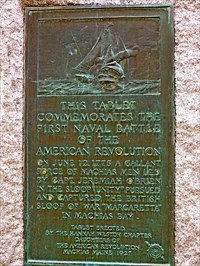 A plaque accompanying an anchor in Machias representing the ties Machias has to the battle. 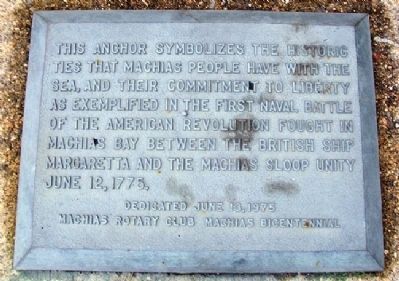 Following the events that began the American Revolution, merchant Ichabod Jones received permission to sail up the coast aboard the Margaretta to Machias after negotiating a deal in which he would transport timber for the British forces. Upon arrival on June 2, Midshipman James Moore scouted the wreckage of the Halifax while Jones pursued business interests in the area. Initially, the townspeople voted against trading with Jones. However after bringing the Margaretta closer to town in an attempt to threaten the town, they reversed their opposition. After trading began, Jones refused to trade with people whom had voted against him during the first town meeting. Angering the townspeople, a local militia leader, Captain Benjamin Foster, reacted by calling reinforcements to the town in an attempt to capture Jones.

On June 11, Foster's plan failed after his men were spotted by Jones and Moore. Jones and Moore fled the scene to the woods and the ships, respectively. The militia soon took control of Unity while demanding the surrender of the Margaretta. Shortly after, Moore exchanged shots with the militia. Moore eventually fled, and the next morning departed from Machias aboard the Margaretta. After the people of Machias turned Unity into psuedo-warship, Captain Jeremiah O'Brien sailed after Moore. Moore fell mortally wounded during combat after O'Brien's crew boarded the British ship.

Moore died in the home of Ichabod Jones' nephew, Stephen, the next day. The remainder of the Margaretta's crew was taken to Massachusetts Provincial Congress. The British suffered 5 killed and 3 wounded in the battle, as well as the surrender of the Margaretta to American forces. In recognition of his achievement, O'Brien had 5 US Navy vessels named after him.