On August 20, 1854, Alexander Ward’s five-wagon train of 20 emigrants was passing through Canyon County on the Oregon Trail. They were heading to Fort Boise, but that evening, a war party of Shoshone and Snake Native Americans attacked the emigrants in an infamously brutal manner, killing all except for two of the Ward children. The Ward Massacre continues to be one of the most endearing attacks on the Oregon Trail. Military retaliation for the Ward Massacre so enraged the local tribes that Fort Boise and Fort Hall were abandoned, making the Oregon Trail unsafe without military escort until the 1862 gold rush. The Ward Memorial Park is dedicated to the victims of the massacre, and the monuments and informational markers in this park serve to pay tribute to the dangers emigrants faced while traveling the Oregon Trail. 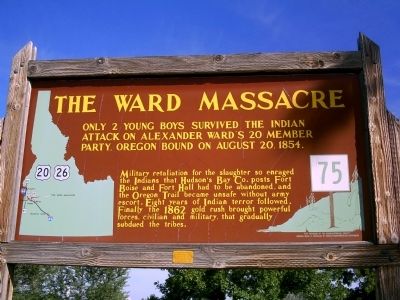 Wagon train of emigrants on the Oregon Trail 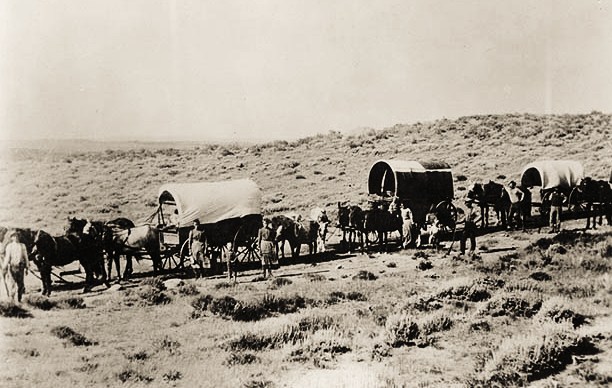 Ward Massacre Monument, with the names of those killed in the massacre 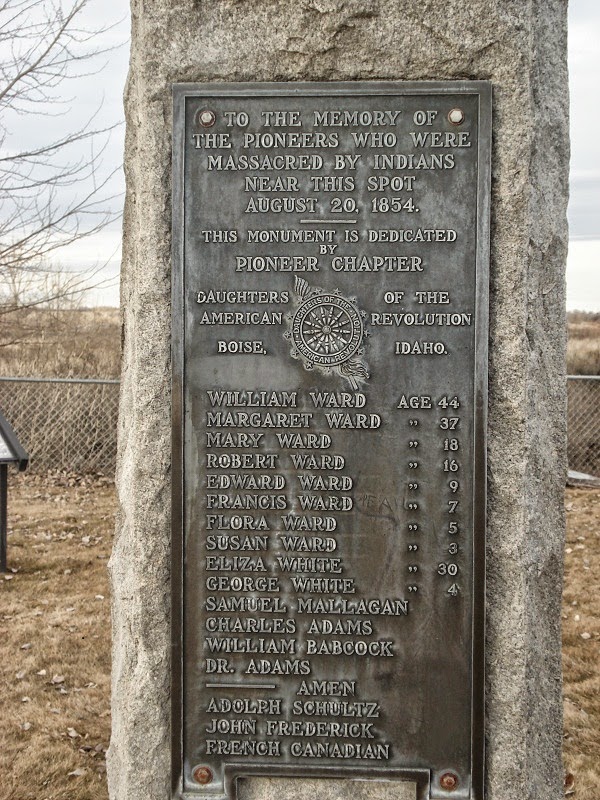 The Oregon Trail Before the Massacre

White settlers and Native Americans had curtailed an antagonistic relationship since European settlement expanded in the New World, and as such, one of the dangers of the Oregon Trail in the 19th century was the possibility of an attack from Native American war parties.

Before the Oregon Trail brought thousands of travelers westwards, trade with Euro-American fur trappers and missionaries in southern Idaho was a lucrative business for the Shoshone, Paiute, and Bannock tribes. Beginning in 1811, the Oregon Trail was essentially a footpath and a mule pack train trail, used mostly by fur traders. Peaceful trading widely expanded in Southern Idaho starting in 1842, when pioneer wagon trains began passing through the Boise Valley, obtaining food, stock, and services from Native groups in exchange for a variety of goods and animals.

Unfortunately, peaceful trading became more tedious by 1853, as there were as many as 8,000 pioneer wagon trains passing through the area, overgrazing the land along the trail and burning sagebrush and trees. Resources stretched thin, and as a result, criminal activity as well as insult and injury occurred between the two cultures. Native bands blamed the white pioneers for the increases in disease and the loss of game. Toward the middle of the 1854 migration, these tensions turned to violence.1

The six-wagon train Ward Party was one such group of emigrants passing through the Boise Valley on the Oregon Trail in 1854. The Party consisted of about 20 members, and on August 20, 1854, the group was traveling along the southern bank of the Boise River. Like other emigrants on this stretch of the Oregon Trail, the Ward Party’s immediate destination was Fort Boise. About 20 miles from the Fort, the Ward Party took a short noon break to eat and rest. While relaxing on the banks of the river, one of their horses was stolen by a band of Shoshone Native Americans. Being on the Oregon Trail, having a horse stolen was a very grave circumstance, and a white man shot the thief down, initiating the slaughter.

Soon after, the entire party was ambushed by Snake and Shoshone Native Americans. The wagon train leader, Alexander Ward, fell dead in the first few minutes, and with careful speed and defense tactics, the men of the Ward Party reached out to protect the women and children and hold off the ambushers. Their defense turned out to be quite futile, as most were killed before sundown while the women were sexually tortured and killed. Children were held over a large, blazing fire and were burned to death. 13-year-old Newton Ward was shot with an arrow and left for dead; his 15-year-old brother William was shot with an arrow through his lung. By feigning death, the brothers would ultimately survive the attack.  William crawled for several days with the arrow still protruding through his chest until he reached fort Hall.  They were the only two who survived the attack.