This historical museum is located inside a historic ranch house that was home to John Tarleton, the founder of the institution of learning that grew to become Tarleton State University. The museum includes a number of exhibits that interpret the history of central Texas and Stephenville, as well as a dozen nineteenth century structures such as log cabins, a church, and a one-room school. Each of these buildings are also filled with exhibits and available for tours.

This local history museum is operated by volunteers who offer free tours throughout the week. 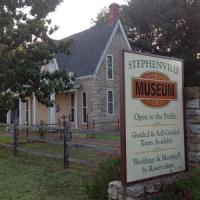 According to the Texas State Historical Association, the city is named for early settler John M. Stephen. In 1854, Stephen donated some of his land for the creation of a townsite on land identified by George B. Erath. Powerful Comanche tribes controlled the area until the final decades of the 19th century when the town became a hub for area coal mining concerns.

The arrival of the Fort Worth and Rio Grande Railway proved to be a turning point in the small town's history, as access to the railroad promoted the growth of several companies that connected area farms to the market. With the railway came the establishment of John Tarleton Agricultural College, which is now a leading regional university and the largest employer in the area.