Nestled in the remote Carroll County hills of Virginia is the Sidna Allen house. The house was a stately home that was built in 1911. The house was designed by Sidna and his wife Bettie Mitchell Allen. The home was built by local carpenter Preston Dickens. It is built in a rural Queen Anne style of architecture that was popular during this era, when there was a Queen Anne revival. The Allens were natives of Carroll County, and had a desire to have the most luxurious home in Carroll County for many years. He was a successful businessman, newspaper editor and school teacher. The house certainly satisfied their desires for an extravagant home. The house has a wrap-around porch, stained glass windows, and gables all visible from the outside. Additionally, the outside also features a gazebo that is attached to the porch. The interior of the home illustrates the luxuriousness the Allens were seeking when the home was built. The inside features a great deal of oak flooring as well as some white maple. The walls were all plastered. Ornamental tiles also complemented the eight rooms. The front parlor fireplace featured a delicate gold filigree. The interior amenities did not stop there. The house also had luxuries that was very rare in Carroll County during this time period. The house had running water, and gas powered lighting. They had a windmill as well as an acetylene generator which of course supplied their lights. The roof was made of slate and features several dormers. The roof also has a large hexagon tower as well as a conical tower. Eastlake brackets complement the towers and the roof. The completion of the home was a culmination of a dream for the Allens. However, they would only live in the house for one year. Sidna Allen and his wife Bettie lived in the house for about a year. The Hillsville Massacre occurred in 1912. Sidna’s brother Floyd, a police officer that had been arrested, and stood trial and subsequent conviction. At Floyd Allen’s sentencing, shots rang out that left five people dead. Sidna, Floyd and several of his nephews were responsible. It should be noted that some people suggest the Allens were not the first to fire any shots. This resulted in Sidna Allen becoming a wanted man. After his capture, about six months later, he was sentenced to prison. The home was subsequently seized by the state. In 1926, Governor Harry Flood Byrd pardoned Allen. In 1974, the house was officially added to the National Register of Historic Places. However, renovations are expensive which inhibited a complete restoration. Currently, the house is undergoing some renovations by the Carroll County Historical Society. The society hopes to secure grants and other funding to aid in the restoration. When approaching from the north on route 58, the house is visible for quite a distance and is still stately. 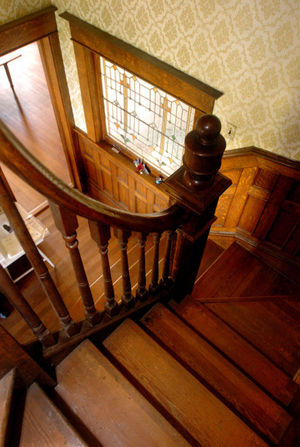 Picture showing the beautiful architecture of the Sidna Allen Home 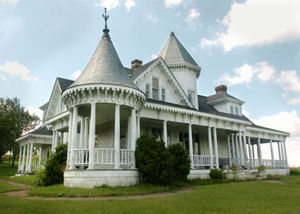 Those interested should also investigate the Hillsville Courthouse Massacre