The Battle of Kirksville was a four-day campaign fought from August 8, 1862 to August 9, 1862 in the area surrounding the town of Kirksville. Union Colonel John McNeil led a force of about a thousand soldiers in pursuit of a Confederate brigade of about 2500 men led by Colonel Joseph C. Porter. Colonel McNeil and his Union troops caught up with Porter and his motley force of raiders and recruits in the town of Kirksville. After a series of short battles, many of the men who had joined the Confederate force in hopes of participating in their raids across Missouri abandoned the fight. The rest of Porter's men either joined him in retreat, returned to their homes, or were captured by Union forces who secured the town. The Union victory at Kirksville demonstrated that Union forces still held control over northeastern Missouri despite the previous attempts to conduct raid by men affiliated with the Confederate militias that were growing throughout the region.

Marker at the Adair County Courthouse giving the history of the Battle of Kirksville. 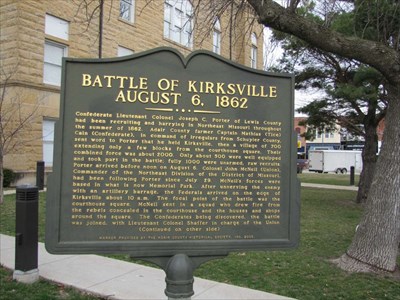 This marker erected by a local chapter of the Sons of Confederate veterans in 2001 was dedicated to the memory of the 26 Confederate soldiers that died in the Battle of Kirksville. 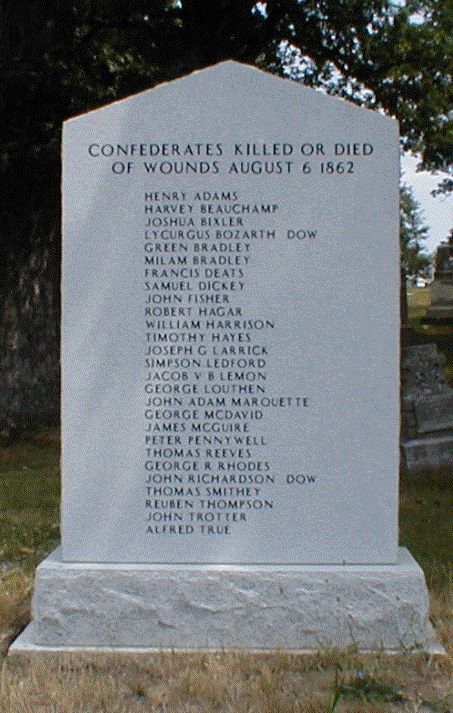 This memorial in Forest Llewellyn Cemetery (four blocks west of the marker) was created to mark the final resting place of the executed Confederates who violated the terms of their parole.

Confederate Colonel Joseph C. Porter was in the town of Kirksville as part of his ongoing mission to recruit additional soldiers. At that time, he had assembled a brigade of between 1500 to 2500 ill-trained and poorly equipped recruits and was being pursued by a detachment of Union soldiers. As the Confederate partisans had taken refuge in buildings throughout the town, a handful of Union volunteers agreed to ride quickly through the streets to draw fire from the Confederates so they might expose their positions. The plan worked but cost two Union soldiers their lives.

Once the Confederates revealed their position in the courthouse and surrounding buildings, the Union Army opened up with their artillery on the courthouse square area. After the artillery subsided, Union troops advanced towards the buildings in two separate wings. Within three hours, most of the Confederate partisans had fled, allowing the men under Colonel John McNeil to secure control of the town and take a number of prisoners.

According to Union records, five Union troops were killed and thirty-two were wounded in the battle, while 130 to 150 Confederate soldiers and partisans were killed. In addition, the Union reported the capture of forty-seven men and estimate enemy wounded between 300 and 400. A second Union force arrived in the area soon after, pursuing the remaining Confederate partisans in the area. As a result, the battle and its aftermath are credited as a major turning point in securing Union control of this section of Missouri.

The Battle of Kirksville was not without controversy. Colonel McNeil held a quick tribunal that led to the conviction of fifteen Confederate partisans who had violated their earlier agreement to abandon the war effort after they had been captured and paroled by Union soldiers in Missouri prior to this battle. McNeal ordered these men to be executed for violating previous parole agreements-an action seldom carried out by military officers who captured previously-captured soldiers who had agreed to abandon the fight as part of the terms of their parole. In subsequent campaigns in Missouri, McNeil ordered the execution of other captured Confederate soldiers judged to have been responsible for the murder of pro-Union civilians.