Built in 1849, Fort Bliss has served as a United States military installation for over two centuries and is even still in use today. The fort began as an outpost that assisted setlers, traders, and prospectors. It was an order from the War Department that led to the creation of this post called Post Opposite El Paso del Norte. Fort Bliss is now home to the 1st Armored Division and a small museum in an adobe building meant to resemble the construction of some of the original buildings that were created prior to the Civil War.

This image of Fort Bliss was taken in the 1880s, a period of transition from its role protecting commerce and the border to a place for training soldiers. 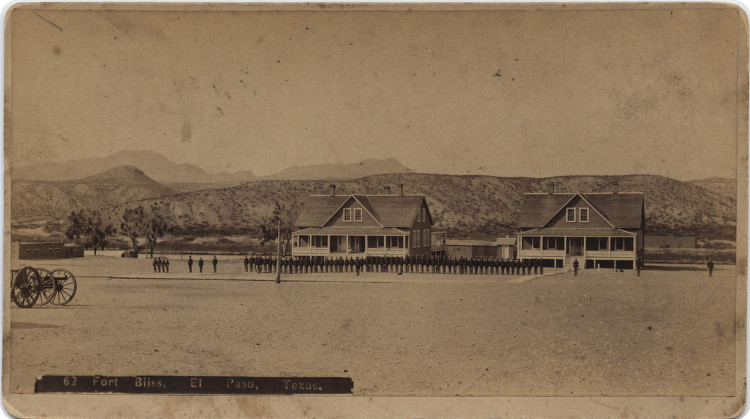 In 1848, The U.S. War Department ordered a military establishment be built at El Paso del Norte, now known as Juarez (city in Mexico). Soldiers at the post helped protect commerce from raids of Apache and the Commanche-two tribes that continued to control large sections of the American West into the second half of the 19th century. On January 11, 1854, some military companies under the orders of Lieutenant Colonel Edmund B. Alexander and Secretary of War Jefferson Davis established the Post of El Paso. It was later renamed Fort Bliss in honor of Lt. Col. William Wallace Smith Bliss, a veteran of the Mexican-American War. Bliss was cited for gallantry while serving in the War.

Most of the troops patrolling at the base were apart of the 8th Infantry Regiment. When Texas ceded from the country during the American Civil War, troops were under orders to abandon Fort Bliss as it would be handed over to the Confederacy. Col. John R. Baylor and his men took control of the fort on July 1, 1861. From there, they used the base as a platform to launch attacks in New Mexico and Arizona to force Union garrisons in the targeted states to surrender. The Confederates tried capturing New Mexico, but the Union forces them to retreat in the Battle of Glorieta Pass, which was a draw, but a strategic victory for the Union Army. Union Colonel James H. Carleton led over 2,000 troops from California to Texas in order to retake Fort Bliss as they made the Confederacy abandon the base. These California troops took control until the end of the Civil War and when Texas rejoined the country.

In 1867, the Rio Grande flooded Fort Bliss’s initial location so it was moved to another one immediately. The fort was moved to a place called Camp Concordia that wasn’t too far from El Paso. It was here that water, heat, and sanitation efforts were minimal at best which led to a lot of soldiers getting sick with various diseases. Supplies also took a while to get there as they came from the Santa Fe Trail and were transported by wagon trains. The post was abandoned in 1877 which left El Paso without one for over a year. This was around the time the city reached a population of 800.

Acres of land of Hart’s Mill were purchased by the government to move Fort Bliss there permanently. However, they abandoned Hart’s Mill in 1890 and a military installation was approved by funds from Congress. Fort Bliss was now on the La Noria mesa east of El Paso’s city limits. Four companies of the 18th Infantry were the new troops that guarded the fort. Local residents also helped in benefitting the fort since it helped the economy.

Before America entered the First World War, U.S. Army officer John J. Pershing trained 2,000,000 soldiers at Fort Bliss. This would become the National Army for the war. During World War II, Fort Bliss was one of the initial detention centers where citizens and residents of Japanese decent were detained in response to xenophobic fears of foreigners following the attack on Pearl Harbor in 1941. It also held 91 German and Italian-Americans, who were being accused of being insiders from Germany and Italy. Before the attack on Pearl Harbor, it was reported by military officials that the Japanese had a spy within Hawaii that fed information back to their Army on Pearl Harbor and where to strike. The U.S. detained these people for interrogation in hopes of preventing another major-scaled attack like this and put Hawaii under martial law for three years. During the Cold War, Fort Bliss was mainly used to train troops and test anti-aircraft equipment in case an attack on U.S. soil occurred from the Soviets. After the 2001 9/11 attacks, Fort Bliss provided artillery for America and NATO to use in their war with the Middle East.

After many centuries in use, Fort Bliss still stands open today. Fort Bliss has grown to encompass much of the city of El Paso and remains the Army's second largest installment. The fort is home to the 1st Armored Division as well as the El Paso Intelligence Center. It also holds a small Museum where visitors can learn about the fort’s history and use. It was subjected for closures in 1995 and 2005, but the government has chosen to keep it open.