Thrall's Opera House has had several different functions through the one hundred and sixty odd years that it has been standing. It was built in 1824 to serve as a dormitory house to religious converts, then went on to become a theater, opera house, school, warehouse, and even a gas station. Today, along with being a function theater and meeting space, it is a historic landmark, preserving New Harmony's long and interesting history for generations of visitors. 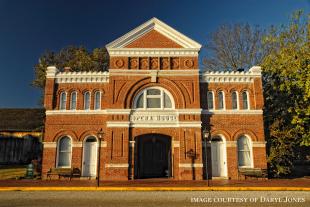 When the opera house was first constructed in 1824, it wasn't an opera house at all.  It was a communal building created by the Harmonists, the religious group that founded New Harmony, to house single people that wanted to come and live in the Harmonist utopia.  The building was the fourth such communal building, and the last building that the Harmonists built in New Harmony before selling the town and moving out to Pennsylvania.  Over the next few decades, the building housed a number of different businesses, including a Sunday school, a store, and a warehouse.  In 1859 it was purchased by the New Harmony Dramatic Association for use as a theater and dance hall.  Various theatrical groups, like New Harmony's famous Golden Troupe, used the theater to stage their productions.
Eugene S. Thrall, a man who had been co-owner of the building since 1867, bought out the rest of it in 1888 and remolded the front, adding the opera house styled facade you see today.  He also changed the name of the building to Thrall's Opera House.  It was used as an opera house until 1910, after which it was used the next few decades as a nickelodeon movie house and a Conoco gas station.  In 1964 the Indiana Department of Natural Resources bought the building, thanks to the efforts of the Harmonie Associates, renovated it to be used as a theater once again.  Thrall's Opera House still hosts various musical productions on its stage, as well as workshops, lectures, and balls.  Visitors can go to the opera house and marvel at the style of its auditorium room, which harkens back to late 19th-century America.