Crystal Springs Rhododendron Gardens cover nearly 10 acres alongside Crystal Springs Creek. The botanical gardens have more than 2,500 rhododendrons, azaleas and other plants. In addition to plants, visitors can enjoy small lakes, waterfalls, fountains and both paved and unpaved paths. The city of Portland started the gardens in 1950 for the purposes of being a test garden for rhododendrons, azaleas, and ericacious plants. 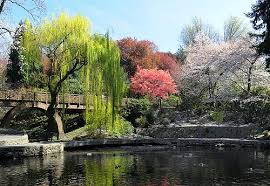 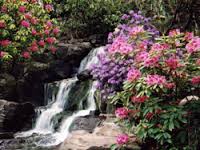 The property was original owned and called Crystal Springs Farm by former Portland Mayor Williams Ladd. In 1950, the garden began and was to be jointly maintained and administered by the Portland Parks and Recreation Department and the Portland Chapter of the American Rhododendron Society.
The first planting started in October of 1950 with the transplanting of three rhododendron hybrid Cynthia which were donated and came from the home of Mr. C. P. Keyser, Superintendent of Parks. These rhododendrons were approximately 40 years old when they were moved and can be seen today surrounding the dedication plaque. The first rhododendron show at the garden took place in 1956. The name was changed Crystal Springs Rhododendron Garden in 1964.
The aims of the test garden were to test rhododendron and azaleas subject to the rules of the American Rhododendron Society, to grant awards to worthy varieties and to acquaint the public with all kinds of rhododendron, thus serving as an educational as well as scientific project.
While no longer used for testing, today the garden offers vistas of mature rhododendrons and companion plants. The garden is enjoyed by thousands of visitors each year and is also a popular spot for weddings.The garden is also the site of the Portland Chapter of the American Rhododendron Society's many flower shows and plant sales.
The garden paths have recently been redesigned to bring the park into compliance with the Americans with Disabilities Act. There are now routes available through the park that are wheelchair accessible. The rhododendrons are in bloom from early March through the middle of June. The peak bloom period coincides with Mother's Day in May.

The garden is open daily from dawn to dusk.