During the final months of the Civil War, after a string of failures upon his infamous Missouri Expedition in 1864, Confederate General Sterling Price finally had a taste of victory at the Battle of Glasgow, where a detachment of his troops defeated a Union garrison and secured badly needed rifles and clothing. As he had at previous battles during the campaign, after the victory Price again tarried too long, giving the Union forces in his path to Kansas much-needed time to prepare their defenses.

Marker that was placed at the site of the Battle of Glasgow fought October 15, 1864. 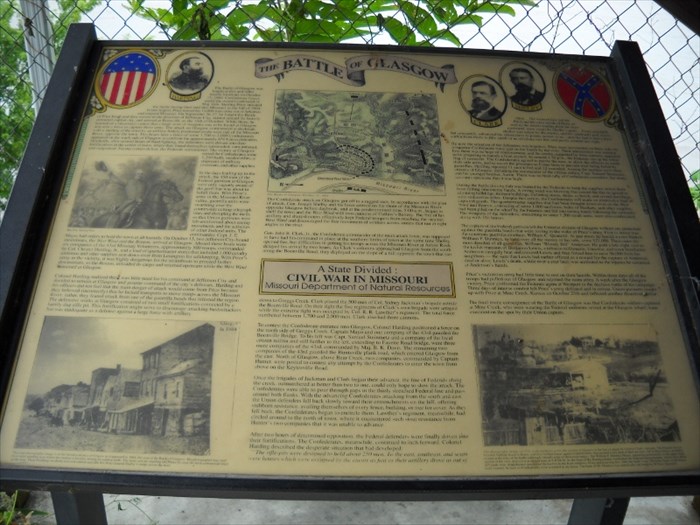 City of Glasgow Marker giving the history of the Battle of Glasgow. 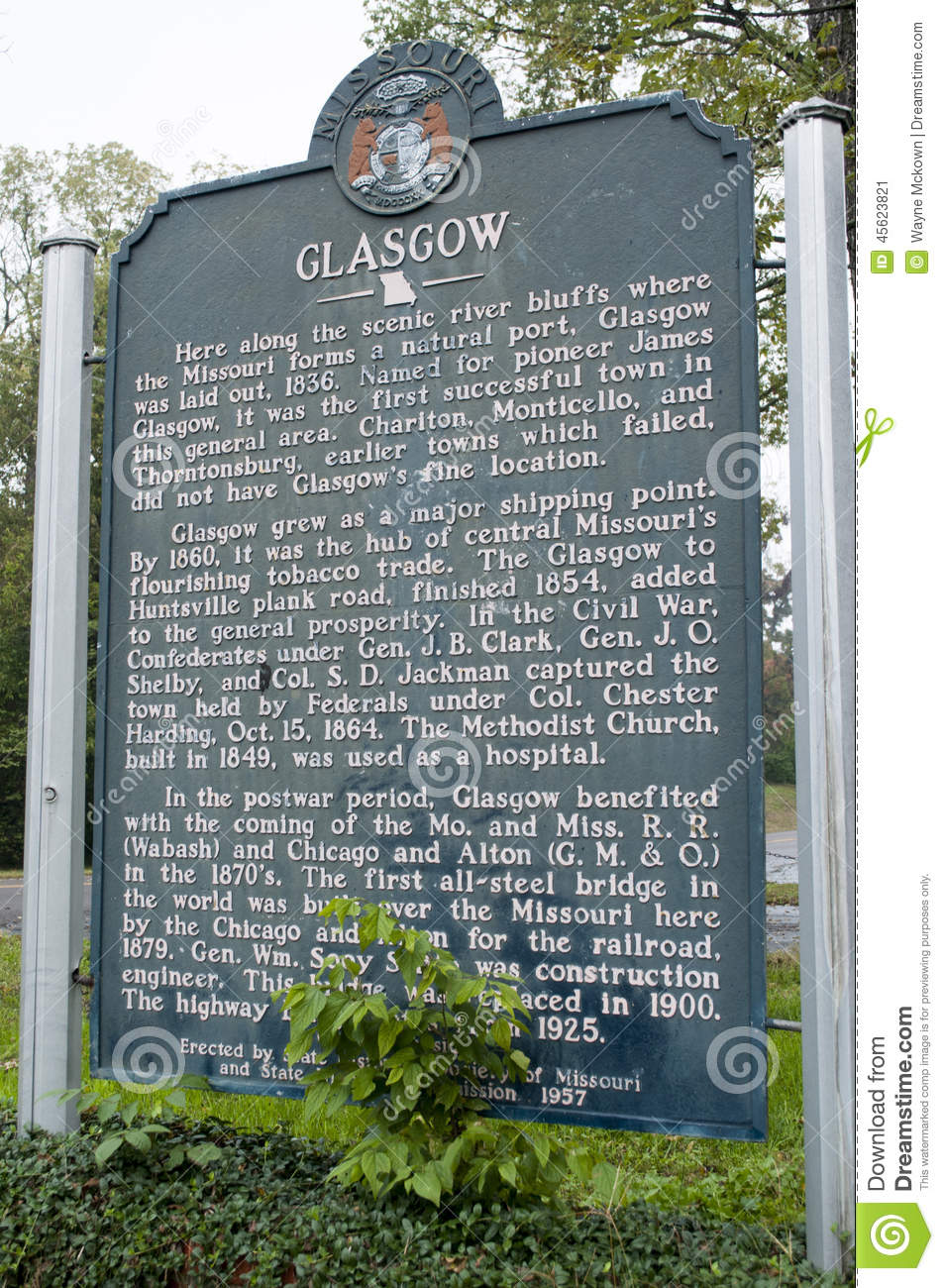 Union Colonel Chester Harding. Harding led the Union soldiers in the Battle of Glasgow against the Confederates led by Brigadier General Sterling Price. 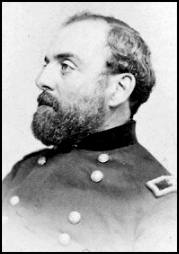 Confederate General John B. Clark, one of the commanders who orchestrated the Rebel victory. After the war he served in the House of Representatives and is buried in Washington D.C. 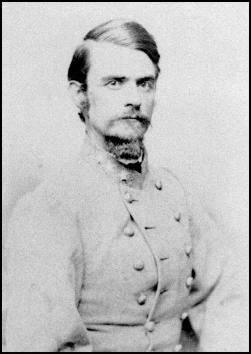 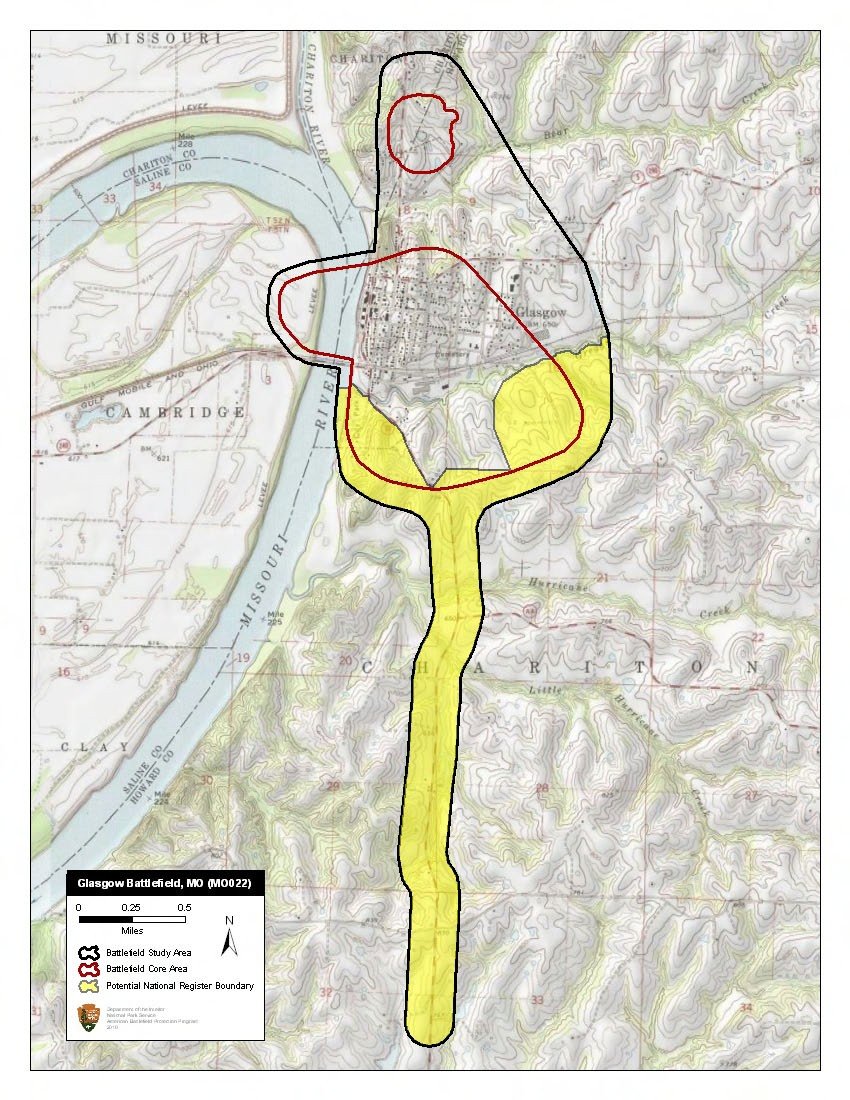 Map from the battlefield plaque. The Rebels attacked on three sides, though Capt. Hunter's Union troops in the north were able to check Lawther's advance for the duration of the battle. 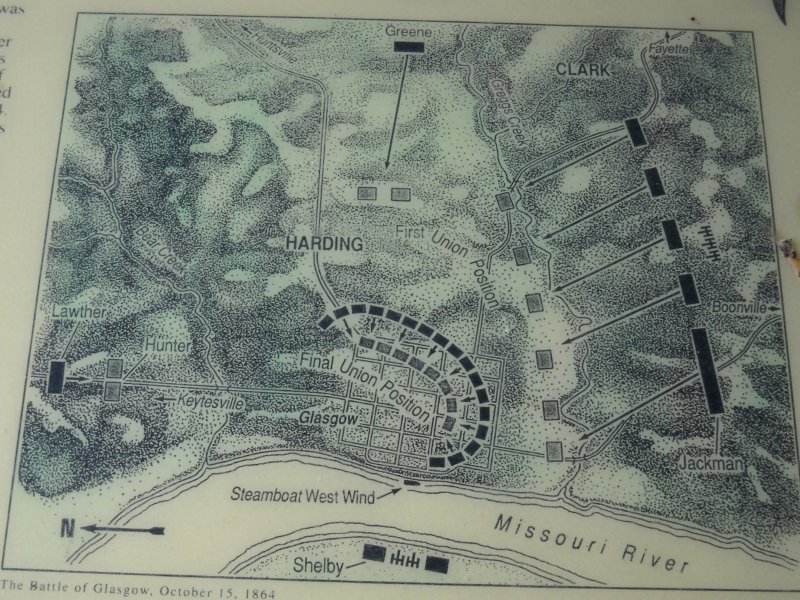 Map of Sterling Price's Raid (upper left). The Battle of Glasgow is nearly at the northern apex of the route, near Boonville. 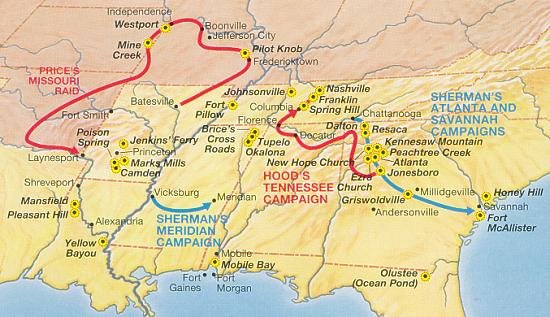 A detailed color map of the battle from Charles D. Collins, Jr.'s excellent "Battlefield Atlas of Price's Missouri Expedition of 1864," one of the most exhaustive studies of the raid's many battles and skirmishes. 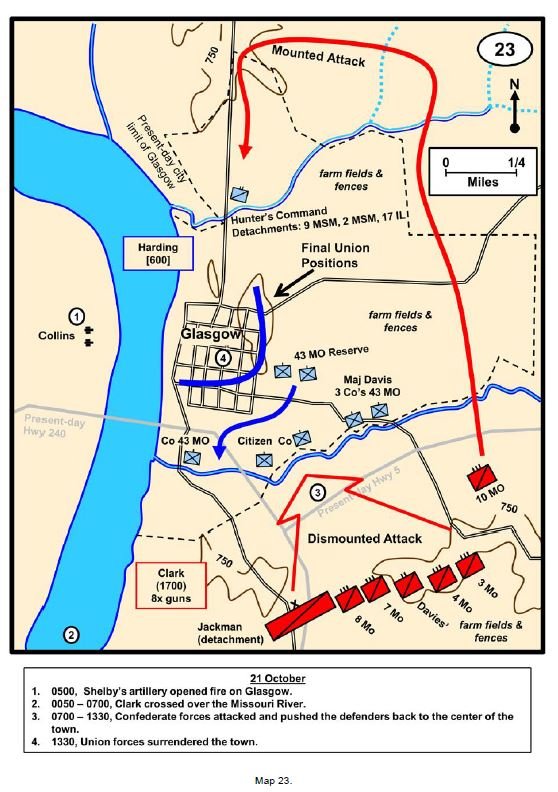 When  Confederate General Sterling Price departed Arkansas for Missouri in late September of 1864, his primary objectives were the capture of St. Louis and Jefferson City. With his 12,000-strong Army of Missouri, he was to install Thomas C. Reynolds at the head of a new Confederate state government. However, frequent delays and a serious military error resulting in over a thousand casualties at Fort Davidson denied him Missouri's two largest cities--by the time he reached them, they had been heavily reinforced and assault was impractical.

Unable to complete his original tasks, Price set his sights on Kansas City and Fort Leavenworth.  First halting at Boonville to gather recruits, he then continued westward, seemingly unaware of the Union forces massing both ahead and behind despite a skirmish with Union cavalry just south of Boonville on October 11. As his march paralleled the Missouri River toward Kansas City, flanking columnns swept out to forage and protect the main columnn.

Price's northward or "right" flanking columnn had a more specific mission on October 15, as reports indicated a lightly-defended Union supply depot in the Missouri River port town of Glasgow. Under the command of Generals John B. Clark and Joe Shelby, a force of approximately 1,500-1,800 men was sent to procure the Federal supplies by force.

The Union garrison of Glasgow was indeed only 150 men, but two days before a 500-man detachment of Missouri volunteers under Colonel Chester Harding had arrived in two steamboats from Kansas. They were to have continued on foot to reinforce Jefferson City, but Rebel guerrilla operations made Colonel Harding reluctant to leave Glasgow with such scant protection. Those same guerrillas had disrupted communications with Union headquarters in St. Louis, so Harding had no idea Confederate forces were bearing down on his position even as he elected to stay and help fortify the town.

Thus his 650-strong force was outnumbered nearly three-to-one as Confederate artillery opened fire on the morning of October 15. Reports from Confederate General Clark and Union Captain George Holloway make no clear mention of Union artillery, so it seems likely that Colonel Harding had no cannon with which to answer the Rebel barrage. The Confederates advanced on the town from multiple directions and sharp fighting broke out among the buildings of the town.

Harding's men were pushed back through the streets to fortified positions on Hereford Hill near the center of town, blowing up their makeshift supply depot at Glasgow's City Hall as they retreated. By 1:00 PM, Harding and his men were surrounded atop Hereford Hill and still under a heavy cannonade from Confederate batteries upon the heights south of the city. Captain Holloway wrote later in his report of the battle that by this time,

"Eight hours of constant and determined fighting had passed; the buildings containing ordnance, commissary, and quartermaster stores had been fired; the steamer West Wind was disabled by shells; every line of retreat was cut off, and every road covered by their artillery fire."4

Running low on ammunition and seeing the Confederates forming up for another determined assault, Colonel Harding made the decision to surrender. Parleys with General Clark intimated that the Confederates' surrender terms would be generous and indeed, the Union troops were paroled rather than taken prisoner; they were also permitted to keep their personal property and surrendered only their weapons. General Clark's poorly-clad men captured a thousand Union cavalry uniforms and 1,200 rifles--sorely needed for Price's invasion force, which lacked weapons for several thousand of its combatants. Ironically, when Price was defeated at the Battle of Westport a week later, many Confederates wearing the captured uniforms were executed.

The battle was not kind to the city of Glasgow. Along with Harding's 8 dead and 32 wounded, 3 citizens of Glasgow who fought alongside the Union men were killed during the fighting. The fires set by the retreating Yankees had spread to burn down thirteen buildings, including a church. Worse still, when the Confederate troops departed three days later, the absence of a Union garrison exposed the town to the depredations of passing Confederate guerrillas. Within days of the battle, the town was visited by the infamous William Quantrill and "Bloody Bill" Anderson. Anderson, notorious for his brutality (for which he would be caught and beheaded a few weeks later) robbed the local bank and tortured one of the town’s Union citizens.

Though October 15's raid on Glasgow (and Price's simultaneous victory at Sedalia that day) was a decisive Confederate victory, it would prove to be his Expedition's high water mark. His columnn marched on to eventual annihilation in Kansas at Westport and Mine Creek.

Today the battle is remembered with an informative plaque on the banks of the Missouri River.