The Chittenango Landing Dry Dock served as a dry dock for canal boats on a section of the enlarged Erie Canal. It had three separate dry dock bays. It was in operation from 1856 until 1917 when the section of the Erie Canal that it resided on was rerouted by the creation of a new barge canal. 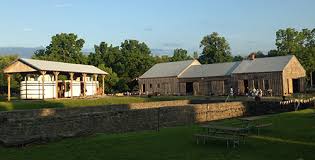 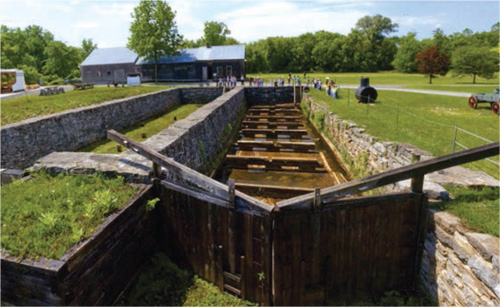 The Erie Canal was first constructed in 1817, but Chittenango was not part of this original line. In fact, at the time of the construction of the Erie Canal, the site that would become Chittenango was considered to be in the "Western Frontier" of the state of New York. The canal would undergo several enlargements, and would also be rerouted several times in order to create a straighter line and decrease the overall length. It was during one of these enlargements, in 1856, that the Chittenango Dry Dock Landing was created. Dry docks are used as locations to build, clean, and work on boats out of water. The boat or ship will sail, or at the time of this ones use, be pulled by horses into the dock, and the gates would be shut and the water drained. The boats rest on special blocks until repair or cleaning is completed and then the dock is flooded again so the ship can leave.

The property for this dry dock was originally purchased in 1856 from the Yates Estate for $1400. During the existence of the original docks, the ownership would change hands several times. It is unknown who the original contractor was who built the docks, but due to similar building techniques, it is thought to possibly have been done by the same contractors who completed the Newark, Albion, and Middleport dry docks.

In 1917, when parts of the Erie Canal were rerouted for a larger barge canal the Chitenango Landing became abandoned for purposes of the canal. It was repurposed and used as a spot for agricultural operations. A building on site was used to house cows, chickens, and horses for a period of time going into almost the 1950s. Wood was taken from the buildings, and from the abandoned barge that resided there and in 1950, stones were removed form the walls to use in the New York State Thruway.

In 1986, a group of people saw the disrepair that the docks had fallen under and decided to recreate what was originally there. This includes all of the docks, as well as having a canalboat docked there. So far, there have been 6 buildings to be restored or rebuilt, with one being the current home of the museum, which displays photographs and history of the docks throughout the years. In 1992, it was paced on the National Historic Registry.

May 15-October 15: Daily, 10am-4pm Winter Hours: Tuesday-Thursday 10am-2pm Other Times may be available by making an appointment