The Black Hawk State Historic Site is situated on the site of the village of Saukenuk, the home of the Sauk Nation, as well as the birthplace of the famous Sauk leader, Black Hawk, who is the namesake of the site. The U.S. Government's disputed claim to the land and their forcible removal of the Sauk from their village was the spark that began the Black Hawk War, which led to the ejection of Native Americans from Illinois. A statue of Black Hawk is on the site, depicting him looking out over his land. Also on the grounds is a 100-acre park and the John Hauberg Museum of Native American Life. 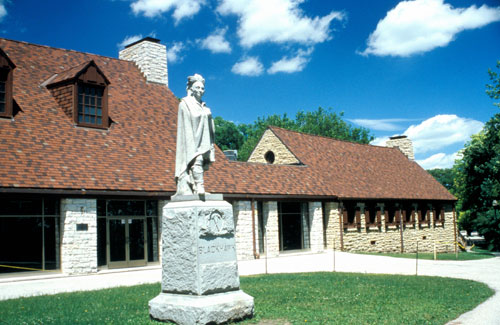 The site was originally called Saukenuk and was the home of the Sauk Nation, a group of Native Americans that had lived on the land for over a hundred years before Anglo-American settlers came to the area.  It was a prime area, settled on a bluff above the Rock River.  Black Hawk, the man who would later become the warrior that led the Sauk's battle against the United States, was born in Saukenuk in 1767.  During Black Hawk's lifetime he saw how Americans changed the lives of his people.  He fought on the side of the British during the War of 1812, and, though he signed a peace treaty with the United States, relations between them always remained uneasy, especially after settlers began coming the area in 1828.  When the U.S. Army tried to remove the Sauk from Saukenuk in 1831, the Sauk escaped across the river to Iowa, but Black Hawk dreamed of reclaiming the land.
In 1832, the Sauk, led by Black Hawk, fought back.  They traveled up to Wisconsin to try and get aid from the British and the Ho-Chunk tribe.  However, neither group helped them and, on the way back, the Sauk and the U.S. Army engaged in a skirmish that came to be known as the Battle of Stillman's Run.  The Sauk won the battle, but they realized that, without help, they had no hope of fighting against the U.S. Army.  Black Hawk escaped back into Iowa, but a portion of the Sauk tribe were left behind and were slaughtered by U.S. Army soldiers while trying to cross the Mississippi in an event called the Massacre at Bad Axe.  In the attack, nearly 400 men, women, and children were killed.  Black Hawk was arrested after the war, but was released in 1833 in order to tour on the East coast and tell a sensationalized version of Sauk life.  He returned to Iowa and lived out the rest of his days, dying in 1838.
The land Saukenuk had once stood on became the Watch Tower Amusement Park in the 1880s.  It hosted concerts, operas, hot air balloon rides, and a roller coaster.  The state bought the amusement park an 1927 and changed its name to Black Hawk State Park.  The park was finally made into a historic site in 1987.  Black Hawk State Historic Site is now a state park that includes acres of woodlands and wildflower fields.  Bald eagle sightings are quite common and visitors have a gorgeous view of the Rock River from the bluffs.  Inside a limestone and timber lodge that was built by the CCC in the 1930s is the John Hauberg Museum of Native American Life, which has exhibits on Sauk life.  Outside of the lodge is the Black Hawk Statue.