Philadelphia's Lazaretto Quarantine Station is the oldest standing facility of its kind in the Western Hemisphere and the sixth oldest in the world. Built in 1799-1800, it is estimated that as many as one third of all Americans are descended from immigrants who passed through this station, which predates Ellis Island by a century [1; 7]. It stands on the site of Pennsylvania's first European settlement, New Sweden's capital under Governor Johann Printz, established in the 1640s. The grounds and buildings of the Lazaretto were later used for recreation, then became the first seaplane base in Philadelphia [7]. 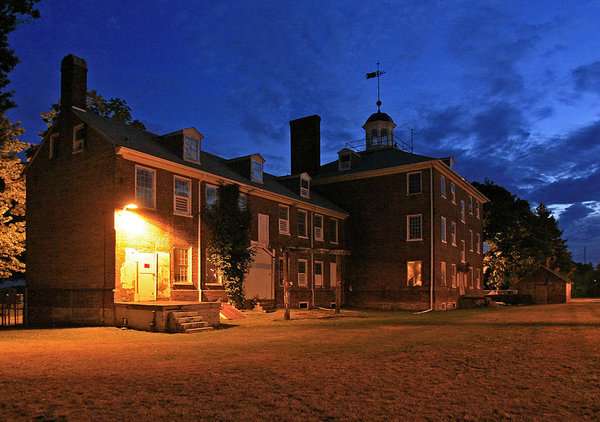 Lazaretto in an 1840 painting by T.L. Carnea (image from Atwater Kent Museum of Philadelphia) 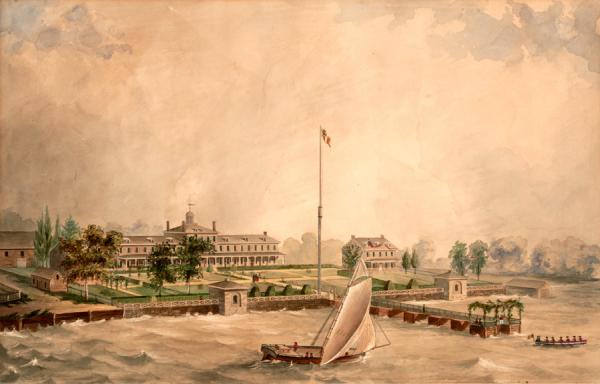 South side of Lazaretto as drawn by Frank H. Taylor in 1895 (image from Historic American Buildings Survey (HABS)) 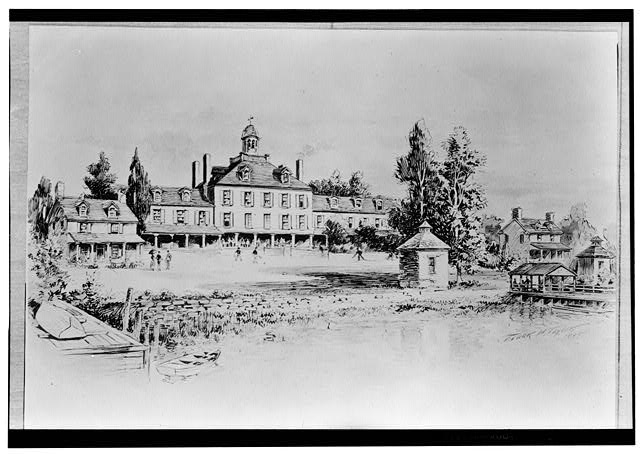 South facade of the quarantine station, photographed circa 1890 (image from the Historical Society of Pennsylvania) 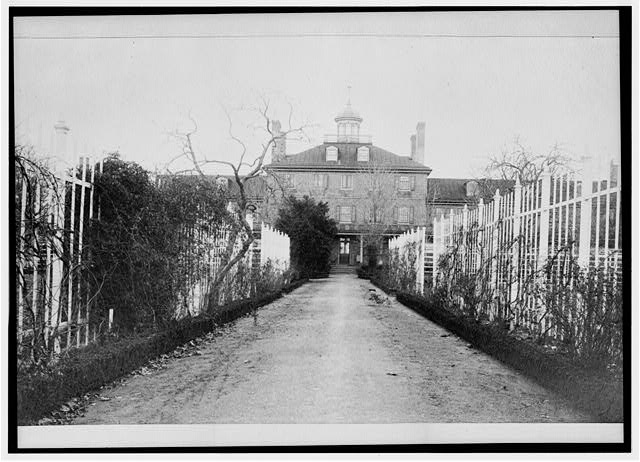 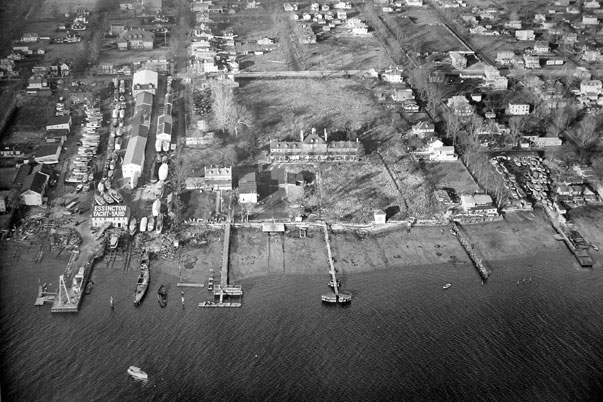 Southwest corner of the west wing of the main building, photographed in 1936 by Joseph P. Sims (image from HABS) 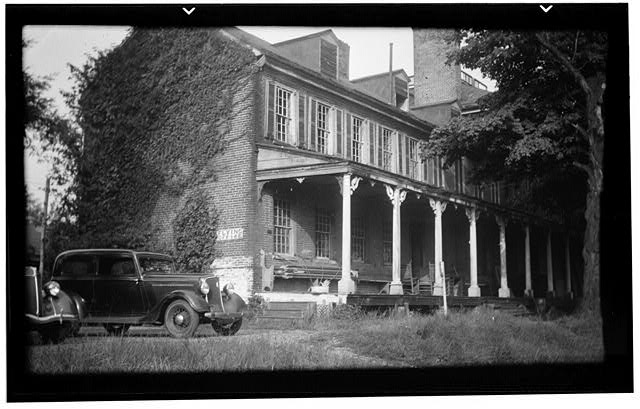 Door detail photographed in 2000 by Joseph Elliott (image from HABS) 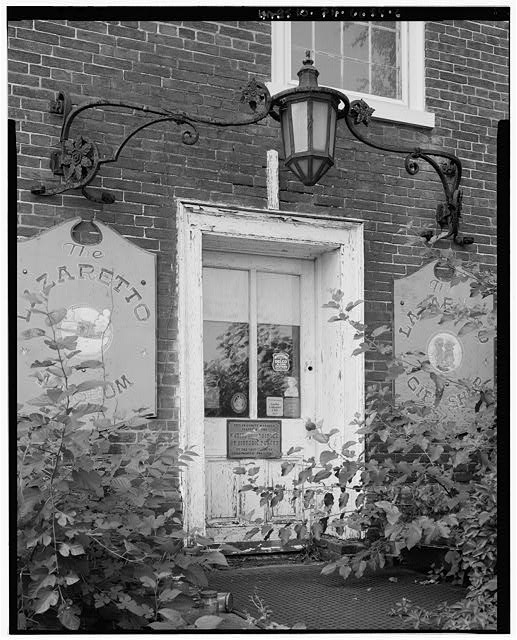 Carriage house photographed in 2000 by Joseph Elliott (image from HABS) 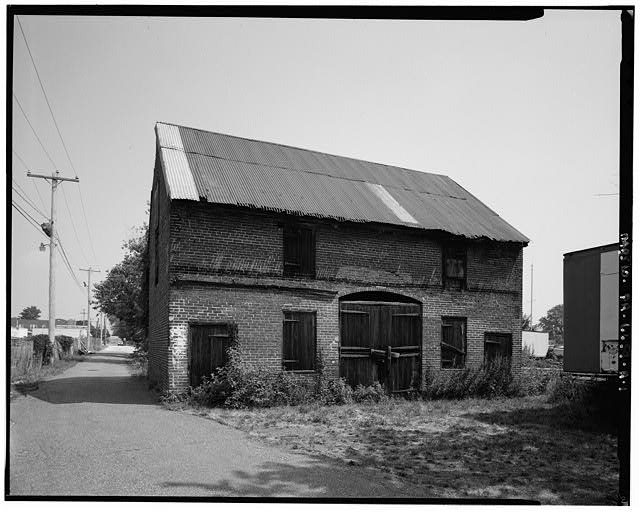 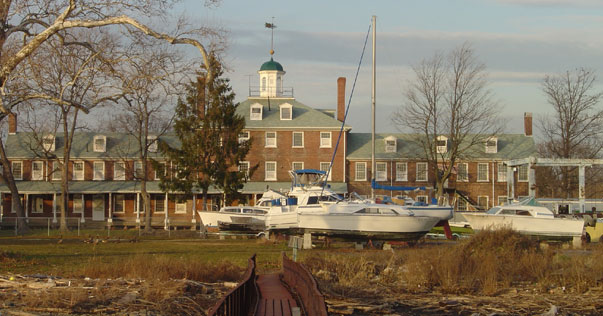 Philadelphia's Lazaretto Quarantine Station is the oldest standing facility of its kind in the Western Hemisphere and the sixth oldest in the world. Built in 1799-1800, it is estimated that as many as one third of all Americans are descended from immigrants who passed through this station, which predates Ellis Island by a century [1; 7]. It stands on the site of Pennsylvania's first European settlement, New Sweden's capital under Governor Johann Printz, established in the 1640s. The grounds and buildings of the Lazaretto were later used for recreation, then became the first seaplane base in Philadelphia [7].

The first Europeans to colonize what would become Pennsylvania were the Swedes (see Queen Village and Gloria Dei Old Swedes' Church), who settled relatively peacefully in the territory of the Lenni Lenape (or Delaware) Indians (see Tamanend Monument). In 1643, New Sweden's first settlement of 250 colonists was built at Tinicum, including residences, farms, a school, and a church. The settlement also included Printzhof, Governor Printz's residence and government headquarters [7; 12]. Recent archaeological investigations on the Lazaretto Quarantine Station grounds have confirmed that the Printzhof site extends into the Lazaretto site, and have also revealed a Native American component connected to the Lenni Lenape occupation of the area from roughly 1200 C.E. [7].

British Quaker William Penn established the city of Philadelphia in 1682, after receiving a land grant from the King of England consisting of what we now call the state of Pennsylvania. A city of many firsts, Philadelphia's public health efforts include the establishment in 1729 of The Philadelphia Almshouse (the first American health care provision for the poor) and the founding in 1756 of Pennsylvania Hospital (the first hospital in the nation). The city established its original quarantine station (or Lazaretto) in 1742, on the banks of the Schuylkill River (this, however, was not an American first, as New York City's Bedloe's Island quarantine station had been built in the 1730s) [6; 7].

In 18th century America, when little was understood about how to cure or control the spread of disease, quarantine was the only known measure for the prevention of epidemics. Particularly in seaports, quarantine stations, also commonly called lazarettos or pest houses, served multiple purposes: first, the spread of foreign disease to the general population; second, the treatment of passengers ill from their long voyages; and third, the official inspection of ships and cargo [12]. In 1742, Governor George Thomas was petitioned by German inhabitants of Pennsylvania for a reception house for their fellow countrymen who required medical treatment upon arrival. As the American Colonies had experienced epidemics of smallpox, cholera, and Yellow Fever in the previous 50 years, Thomas agreed, and the state obtained 342 acres on Fisher's Island (also called Province Island) and spent $1,700 on African slaves toward the creation of the city's Pest House [7; 12]. The station itself was built on the six acres closest to the bank of the Schuylkill River, with additions to the complex in 1750. The station survived the Revolutionary War, but not the public health policy changes following Philadelphia's outbreaks of disease in the 1790s, particularly the infamous Yellow Fever epidemic of 1793 [12].

As many as 5,000 residents (10% of the population) of Philadelphia died during the five-month epidemic of 1793, and another 17,000 (1/3 of the population) fled the city, including most of the members of the government [3; 7; 11; 12]. The City of Philadelphia responded by creating a Board of Health the following year, and the decision was made to build a new quarantine station further from the city. The site at Tinicum was chosen for its isolation and small population, and ten acres were purchased from brother and sister Thomas and Rebecca Smith and six acres from John and Mary Taylor [12]. On the site were built a customs house, wharf, and a quarantine station under the guidance of the Board of Health and the Guardians of the Poor [6; 12]. In spite of these new facilities (since Yellow Fever spreads through mosquito bites), more epidemics followed each summer, killing another 3,500 in 1797 and forcing residents to flee the city again the following year [3; 6]. Volunteers were requested to care for the sick; African-American clergymen Richard Allen and Absalom Jones offered their help and recruited nurses and gravediggers from the city's 2,500 freedmen and women through the Free African Society; more than 300 of these volunteers died of the fever themselves [6]. The Lazaretto buildings were completed in 1800. The main building imitated the style of the city's Pennsylvania Hospital, with a physician's residence on one side and the quarantine master's residence on the other, each with their own stables. At the riverbank, two guard houses kept watch for ships coming either from the Delaware River or from the Port of Philadelphia. The complex also included a burying ground and a dead-house [7; 10]. At the time, Philadelphia was America's largest city and busiest commercial port [3]. As many as one out of every three Americans is estimated to have descended from immigrants who passed through the Lazaretto Quarantine Station, where the ill were treated and cargoes inspected and sometimes fumigated with sulfur and alcohol or destroyed altogether to prevent the spread of disease. All passengers and merchants who passed through Philadelphia were quarantined for at least one full day, and sometimes as many as thirty days [2; 6; 7]. When, in 1800, two illegal U.S. slave ships were captured by the U.S.S. Ganges, the emaciated Africans on board were brought to the abolitionist city of Philadelphia and treated by the staff of the Lazaretto station for 31 days (long enough to establish legal status) and freed into the care of the Pennsylvania Abolition Society [1; 6]. The station also treated residents of the city who contracted infectious diseases [12]. In spite of the excellent organization and (for the time) treatment the Lazaretto offered, the mosquito-borne yellow fever persisted, returning several more times in the 19th century, particularly in relation to a ship from Jamaica, the Home, in the summer of 1870. Believing the fever to be airborne, 1,000 Philadelphians called for the removal of the Lazaretto. However, dramatic increases in European immigration necessitated its continuation until 1895, at which time most immigration came through New York City and the Marcus Hook quarantine station on the Delaware began receiving ships for the Philadelphia area [3; 12].

From 1895 to 1912, the Georgian-style main building of the Lazaretto was used as a vacation spot and country club by wealthy members of the Philadelphia Athletic Club. The Orchard Club featured bicycling, tennis, baseball, hunting, fishing, and boating [5; 7]. The property was planted with grapes, flowers, and trees, and the buildings housed indoor games such as billiards and ping pong. The history of the building was important to the Club, who were careful to preserve the exteriors and much of the interior of the buildings in their original style. On December 17, 1909, the Aero Club of Pennsylvania was established, and seven years later organized Philadelphia's first aviation school. The Philadelphia School of Aviation opened at the former Lazaretto on May 12 under the guidance of Colonel Robert Edward Glendinning. It became one of the first seaplane bases in America, and was taken over by the War Department on March 8, 1917 for training squadron fighters and the Army Signal Corps for World War I. After the war, flight instructor Frank Mills returned to Philadelphia and purchased the Lazaretto property, reopening it as a seaplane base which was operated by himself and his family until 2000 (it also served the United States forces during World War II) [4; 12].

The property was placed on the National Register of Historic Places in 1972. It was abandoned in 2000 and saved from demolition in 2005, but remains stable and retains a high degree of historic integrity, as well as being of national (arguably international) historic significance [2; 7]. Archaeological investigations of the grounds seek to locate Printzhof, the 1643 Swedish colony consisting of the governor's house, courthouse, prison, and meeting house, as well as the Lazaretto's burial ground, smallpox hospital, and ice house [2; 12]. While the main building is slated to become Tinicum Township's municipal government headquarters, historic preservation is a top priority, and the township's Historical Society holds three events on the grounds every year: the Tinicum Township historical Society Flea Market in June, the Share Your Own History Weekend in September, and the History and Mystery Weekend in October [4; 5].

A rare surviving example of a quarantine station, the Lazaretto was the introduction to America for many immigrants. Established in 1799 in reaction to a yellow fever epidemic, it operated until 1893 to inspect cargo and passengers for infectious diseases. Affected cargo was fumigated or destroyed and ill passengers were hospitalized and quarantined until recovery or death. The cemetery was here and original structures remain nearby.
Erected 2008 by Pennsylvania Historical and Museum Commission [9].

Lazaretto Quarantine Station — Delaware [County] — It is believed to be the last remaining quarantine station in the United States. For much of the 19th century, it was where many Europeans were first introduced to the United States [7].