This somewhat unassuming, three-story brick building has a fascinating history behind it. The home of Dr. Richard Eells, a staunch abolitionist, the house was once on the Underground Railroad. The Eells home was an essential part of the anti-slavery movement in Quincy, a town that was many a runaway slave's first chance at freedom after crossing the Mississippi from Missouri. The house is part of the South Side German Historic District, a neighborhood that is on the National Register of Historic Places. 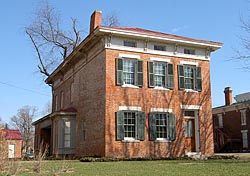 Dr. Richard Eells and his wife had the house built in 1835 in the Greek Revival style, though they later modified it to a more Italianate look.  At that time Quincy was a prosperous river town, and Eells was not only an important figure in the community, but he was also a prominent member of the Illinois abolitionist movement.  He is believed to have helped hundreds of slaves escape to freedom, and became the president of the Illinois Anti-Slavery Party in 1843.  In 1842, Eells sheltered a man named Charley at his house.  Charley was a slave who had run away from Monticello, Missouri by swimming across the Mississippi River and was hoping to reach freedom in Canada.  While trying to get Charley to safety at another Underground Railroad location in Quincy, Eells was stopped by slave hunters,  Charley escaped but was later caught and sent back to Missouri.  Eells was arrested for aiding a fugitive slave and stood trial before Judge Stephen A. Douglas.  Douglas senteced Eells to pay a fine of $400, but Eells refused and appealed his case to the Illinois Supreme Court.  Eells lost the appeal along with much of his finanes.  In 1846, while taking a trip on a river boat on the Ohio River, Eells died.

The house is now a museum run by a organization known as the Friends of Dr. Eells House.  Tour guides take guests through the home every Saturday, talking about the home's significance to Quincy's Underground Railroad, as well as the architecture of the house.  The furniture and decor the home have been authentically reproduced to an early 19th century look.

Saturday: 1 pm - 4 pm You can also call to schedule a tour on a different day

The tour of historic markers and sites related to Lincoln within the heart of Quincy and the historic Washington Park. The tour picks up at the Dr. Richard Eells House and explores its history and connection to the Underground Railroad. The tour moves towards Washington Park and includes a variety of Looking for Lincoln markers. This short walk also includes the Lincoln-Douglas Debate Interpretive Center which offers a chance to explore the historic significance of the debates between Lincoln and Douglas, including the sixth debate which occurred at Quincy in 1858. The tour also includes Quincy's History Museum on the Square which is home to a multitude of rotating exhibits from the pioneer era in addition to a permanent exhibit about Lincoln.