Located within the Denver branch of the Federal Reserve Bank, the Denver Money Museum utilizes interactive and interpretive displays to impart knowledge to visitors about the Federal Reserve System, its history, economics and monetary policies. This modest museum offers both self-guided audio tours and guided tours for groups of the 5th-grade level and above with a reservation. Walk-ins are welcome and admission is free. However, adults 18 and older are required to show a valid state or national ID to gain admittance.

The Money Museum is located inside the Denver branch of the Federal Reserve Bank. 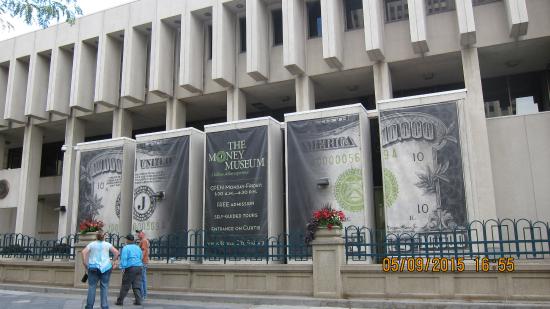 One of the interpretive displays within the museum.

The main room of the Money Museum.

The museum permits visitors to design their own currency and attempt to detect which is a real $20 bill and which is counterfeit. It also gives visitors the chance to take a photo in front of $30 million worth of $100 bills (and it takes up more space than you might think). One can also view a range of American currency dating back to 1775, a $100,000 bill and coins produced at the nearby mint which contain various deformities.

Since the bank also destroys $2-$3 million daily, visitors are given a bag of shredded money as a souvenir of their visit. Finally, as visitors approach (or leave) the museum on foot, they often hear strange sounds emanating from the sidewalk, and many spend a few minutes attempting to convince themselves that they are not hearing things.

Stanley, Deb. "Check this Out: 10 Secrets of the Federal Reserve Bank in Denver." The Denver Channel. February 18, 2015, Accessed June 2, 2016. http://www.thedenverchannel.com/lifestyle/discover-colorado/secrets-of-colorado/check-this-out-10-se...