Established in 1990, the National Frontier Trails Museum is dedicated to interpreting and promoting the history of the main trails—the Santa Fe, Oregon, and California trails—that led people to the West in the 19th century. Thousands of people traveled west—over rivers, hills and broken terrain to head to the West, and nearly all of them passed through Independence. The museum explores this history, as well as the Lewis and Clark expedition and the gradual acquisition of western lands. It features interpretive exhibits and a research library. Visitors can watch an introductory film about westward expansion, see many artifacts and other items on display, and learn about fur trappers, traders, Mormons, and the transcontinental railroad. It also still possible to see wagon ruts across the street on the Bingham-Waggoner Estate; a pathway with interpretive signs circles around them. For those interested, the museum offers a covered wagon tour.

The museum opened in 1990. It explores the history of westward expansion by focusing on the primary trails settlers took. 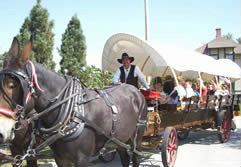