Established in 1891, the Oxford Hotel is the oldest remaining hotel in the city of Denver. The hotel was financed by owner Adolph Zang and designed by Frank E. Edbrooke, the same architect who designed several other Denver landmark buildings including the Brown Palace Hotel. Zang and his supporters designed the Oxford in a manner calculated to promote the nascent city, offering a vision of what it might become with its opulent lobby and guest rooms. The building included its own power plant that produced steam heat, electric and gas lighting. Other features included state-of-the-art water closets, a men’s only dining room, a barbershop, library, pharmacy, Western Union, stables, saloon, and elevators known as “Vertical Railways.” Like many other historic downtown hotels, the Oxford's fate was uncertain as traveler preferences shifted towards inexpensive hotel chains near interstates and highways instead of downtown rail and bus stations. Thanks to the efforts of investors and preservation-minded citizens, the Oxford has been preserved and renovated in ways that blend modern conveniences with its unique historic charm. For example, the hotel's Art Deco style Cruise Room has been designed to appear much as it did in 1933 when it opened on the first day of prohibition's repeal.

The Oxford Hotel is is Denver's oldest continuously-operating hotel. 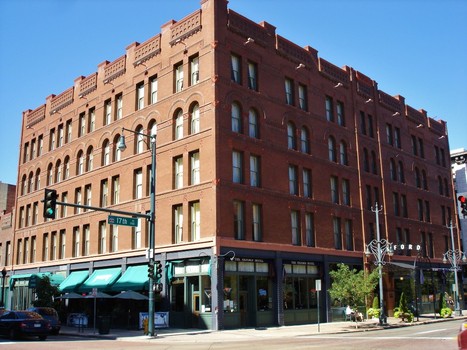 A historic photo of the hotel along the former trolley line. 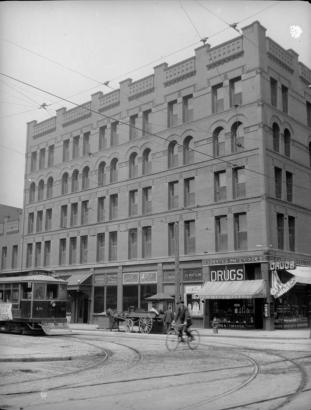 The original structure was completed in just one year. The hotel was immediately successful thanks in large part to its convenience to Union Station as well as its amenities. The original structure was a five-story, red brick building in the shape of a “U.” A two-story addition was added in 1902 to provide extra rooms. A five-story annex building of terra-cotta was added in 1912.

In the 1920s, it received an Art Deco-style makeover courtesy of architect Charles Jaka. He added the Cruise Room. The hotel remained prosperous until after World War II when it fell on hard times. In 1979 it was purchased by Charles Callaway who began restoring it to its original luster. The architectural firm of William Muchow & Associates was hired. The price tag for the renovation was $12 million.

The interior has gone through a number of renovations and upgrades to stay modern. It was added to the National Register of Historic Places on April 17, 1979. It has since bounced back to become one of the premiere luxury hotels in Denver catering to special events, offering spa services, and featuring fine dining and an acclaimed martini bar in addition to top-notch accommodations.