The Putnam Underground Railroad Education Center preserves and shares the history of this small town's involvement in the effort to aid African American men and women who were attempting to escape slavery.

House of George Guthrie. This house was a prime station in the Putnam District that housed runaways. 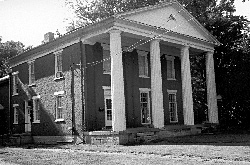 The Stone Academy building which served as the location for the Ohio Abolition Society conventions in 1835 and 1839. 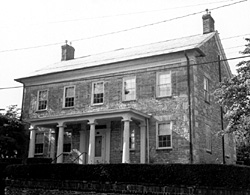 This community is one of the oldest in this region of Ohio and home to some of the most significant abolitionists in American history. Zanesville was the location for two of the Ohio Abolition Society's conventions (1835 and 1839). The Stone Academy is one of the oldest remaining buildings and was home to some of the most significant meetings of abolitionists. The building hosted conventions that were attacked by mobs of anti-abolitionists. During the 1839 convention, for example, a mob of 200 anti-abolitionist planned to set fire to entire area. Had it not been for the vigorous self-defense of dozens of community menbers and abolitionists, this location might have been the scene of one of the worst episodes of mob violence in American history.

The Putnam Presbyterian Church was one of the centers of the region's abolitionist movement. Built in 1835, the first pastor of the church was William Beecher, brother of famous author Harriet Beecher. Monthly prayer services were held in the church’s basement along with speeches given by anti-slavery advocates, most notably Fredrick Douglass. Local residents such as George Guthrie and his wife lived in the district and used their home to house numerous runaway slaves.

The Zanesville-Muskingum County Visitor's Bureau offers a historic Putnam walking tour brochure and tours of the Putnam Presbyterian Church by appointment. The Stone Academy is now a museum operated by the Pioneer and Historical Society of Muskingum County.